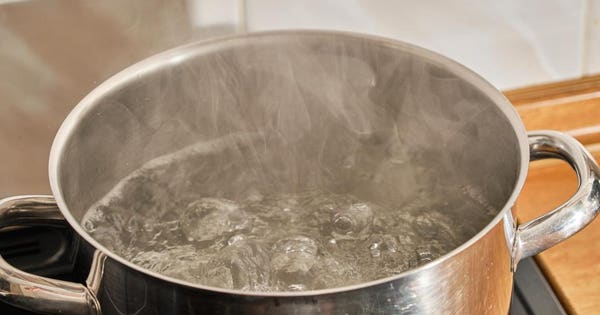 Steam from boiling water can cause scald injuries, even if you don’t feel pain. (Photo: Getty Images)

Your vagina is not a tea pot. It is not designed to handle hot steam. If you expose your vagina to hot steam, you could get burned, literally. That’s what happened to a woman in a case report published in the Journal of Obstetrics and Gynaecology Canada.

In writing the case report, Magali Robert, MD, MSc, a Professor of Obstetrics and Gynecology at the University of Calgary, told the story of what happened to a 62-year-old woman who tried vagina steaming in an attempt to reduce her vagina prolapse, after a doctor had recommended that she get surgery.

According to dictionary.com, prolapse means “to fall or slip down or out of place.” But you usually don’t say that “you prolapsed out of your chair” or “that book prolapsed off the shelf.” Prolapse is more frequently used as a medical term when a body part or part of a body part moves, slips, or drops out of place. For example, the picture on the right below shows what a uterine prolapse looks like:

Illustration of a uterine prolapse, the uterus descends into the vaginal cavity. (Photo by: BSIP/Universal Images Group via Getty Images)

So a vaginal prolapse is when part of your vagina falls or bulges out of its normal position.

Typically, for vaginal prolapse, your doctor will first recommend exercises to strengthen your pelvic muscles to help hold your vagina in place. If these don’t succeed, your doctor may try to fit you with a pessary, which is a vinyl ring inserted in the vagina. If this doesn’t work then surgery is next usual option.

Apparently, a traditional Chinese doctor had told this woman that vaginal steaming could somehow fix her vaginal prolapse or part of her vagina falling down and out of place. Such advice would be a traditional pile of garbage.

Despite this lack of evidence, the patient followed the traditional Chinese doctor’s advice and prepared a pan of boiling water mixed with herbal medicine and put this pan on the rim of her toilet bowl. She then sat on the toilet seat for 20 minutes, doing this on consecutive days. When she began experiencing a bloody discharge from her vagina, she didn’t go to a traditional Chinese doctor but instead went to a traditional emergency department, as in a standard emergency department.

A physical exam revealed that the patient had suffered a second-degree burn of the lining of her cervix and vagina. She never felt any pain, so without the bloody discharge, she, in theory, could have continued to scald her vagina. The advice she received was to apply Polysporin antibiotic ointment to the area, wrap the area with gauze, and, presumably, stop treating her vagina like a bunch of carrots.

You can steam vegetables or a shirt or maybe an envelope open, but steaming your vagina may not only burn you but also disrupt the normal environment of your vagina. The normal bacteria of your vagina are the keepers, cleaners, and protectors of your vagina, maintaining the appropriate acidity and other conditions. Your vagina is like a self-cleaning oven and normally doesn’t need help to keep it “clean” or “refreshed.” Putting anything unusual in your vagina, whether it is steam, coffee, a cucumber, or a jade egg risks disrupting the complex vaginal ecosystem, as I have written before for Forbes.

Vaginal steaming is not a new phenomenon, having been used for centuries by various cultures. However, it gained more attention and popularity after celebrities like Gwyneth Paltrow touted its benefits. As the case report explained, “the practice of vaginal steaming has gained increased acceptance since 2015, following the endorsement by Gwyneth Paltrow on her popular website goop.com.” The case report does add that “Interestingly, vaginal steaming cannot be found currently on the goop website (searched October 10, 2018).”

Steam is not something to be taken lightly, even though it floats. Steam can immediately scald once it comes into contact with your skin or mucous membranes. The problem is the presence or absence of pain is not an accurate gauge of how bad the burn may be, as was seen in the case of this woman. Therefore, just because you feel fine during and after vaginal steaming, doesn’t mean that your vagina agrees with you.