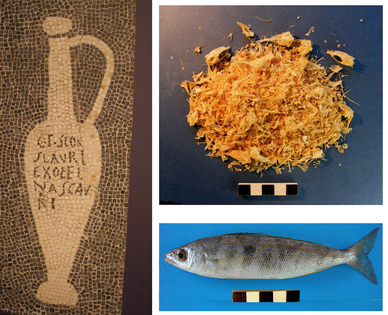 Roman fish sauce (garum) was made out of picarels (bottom R). Skeletons of these fish were recovered from Pompeii (top R). A mosaic from Pompeii showing a garum container (L).

The traditional date on which Mt. Vesuvius erupted in 79 AD, destroying Pompeii and other sites in the Bay of Naples, is August 24 based on historical records. This date has often been questioned, however, on the basis of the heavy clothing worn, the presence of some late autumn fruits and wine, and a charcoal inscription recovered last year. A close analysis of fish skeletons recovered from Pompeii is the latest evidence in this longstanding debate.

Ancient Romans had a complicated relationship with seafood. While many people undoubtedly consumed it, particularly those who lived close to the coast, this resource was more seasonal and less dependable than terrestrial meat such as pork. Much more popular was the fermented fish sauce called garum, which may have originally been created to preserve fish during times of plenty. Similar to East Asian fish sauce consumed today, garum was made from small fish macerated over the span of several months.

Archaeological understanding of the creation and composition of garum comes both from shipwrecks that contained thousands of jars of the stuff, and from sites such as Pompeii, where evidence of production of the condiment was found in the “garum shop” on the west side of the amphitheatre. This shop produced 23 amphorae full of garum at different stages of manufacture, and archaeological analysis suggested about 17 were made from anchovies, picarels, or a mixture of the two, while the rest were a hodgepodge of herrings, mackerels, tuna, and other species of fish. Until recently, however, no close analysis of the fish skeletons had been done.

Writing in the International Journal of Osteoarchaeology, Alfredo Carannante, director of the Mediterranean archaeology department at the International Research Institute for Archaeology and Ethnology in Naples, details his analysis of the contents of one amphora from Pompeii’s “garum shop.” Carannante’s goal was to determine the species present, the size of the fish, and their age at death, which provides information about the season in which they were caught.

Carannante discovered that all the bones in the batch he analyzed were from Spicara smaris, the common picarel, which usually grows to about 6 inches long and is native to the Atlantic Ocean, Mediterranean Sea, and Black Sea. The picarel from Pompeii, based on the fact that the bones were not crushed or broken, had been tossed into the amphora whole and not filleted or beheaded. Their small size and their growth rings suggest that the picarels were all about one year old when they were caught, and they were all female, likely on account of the fact that female picarels seek out shallower water than do males.

Food historian and chef Sally Grainger, an expert on garum, appreciates Carannante’s detailed analysis. Grainger tells me that she is “particularly pleased that he has highlighted just how inadequate, confused, and sketchy the study of this material has been to date.” Carannante, she notes, has brought out the complexity of the finds in a way that has never been done by other researchers, and “he poses very important questions about the apparently unusual nature of the fish sauce trade in Pompeii compared to that of the large, salted fish processing areas in Spain and North Africa.”

Beyond allowing archaeologists to better understand the process of garum production, the fishes’ size and sex may hold new clues to the date of the famous eruption. Carannante writes that “the latter layer of bone growth appears to be well-developed and of a lighter density, revealing that the picarels died when the waters were warmest during the summer season or at the beginning of autumn.” Further, he suggests that “the study of the fishing season undertaken on the remains has demonstrated that the catch was made in late summer or early autumn when the water was warmer. The comparison of data suggests that the most probable period for fishing of the Pompeian picarels took place in the second half of summer (August-September) or at the beginning of autumn.”

Roman vat used for producing garum, discovered in the Roman ruins of Cerro da Vila in the Algarve.

Although Carannante writes that the traditional August 24 date coincides well with his results, he admits that “it is not possible to exclude a later date for the volcanic destruction. A date falling in October could also be compatible if the picarels were fished at the end of the summer and left to brine for a month.” Carannante tells me that he is “not really directly interested in supporting one or the other hypothesis” about the date, as his research suggests that both are possible.

Grainger says that “this work corroborates what has already been concluded; that is, that the eruption happened in late August.” And archaeologist Miko Flohr of Leiden University agrees that Carannante’s data are not controversial in the context of the seasonality of the Roman fishing economy. Flohr does note, however, that “methodologically, one catch – or one amphora – does not make a very strong case for anything,” and that more data will be needed in order to form a consistent picture of garum production at Pompeii. “It is good that Carannante brings up the point about the date, but also good that he doesn’t really overstretch the evidence,” Flohr says.

While scholars’ arguments about the specific date of the eruption of Mt. Vesuvius in 79 AD may not seem like a big deal when viewed from the perspective of thousands of years of Roman history, the difference between August and October is important to researchers like me who employ a demographic and ecological perspective. For example, since many human diseases – like the flu – are seasonal, a difference of even two months is incredibly important for studying ancient pathogens, skeletons, and organic remains from Pompeii, Herculaneum, and Oplontis. Carannante’s research offers a new window into the seasonality of the volcanic eruption, but the debate about the date and its importance is ongoing.

For his part, Carannante would also like to see more research into this topic, concluding that “the available data are too few for an in-depth discussion of the fish sauce production industry more widely” and that “other issues on the garum subject remain unresolved” such as which herbs and spices were used.  The Pompeii garum shop itself is interesting and worthy of further study as well, as it appears to be a small enterprise producing fish sauce for local consumption. Carannante wonders if this “can be considered an elite item rather than a cheap, common ingredient for everyday cuisine,” but concludes that “only further multidisciplinary study can provide the answers to such questions.”