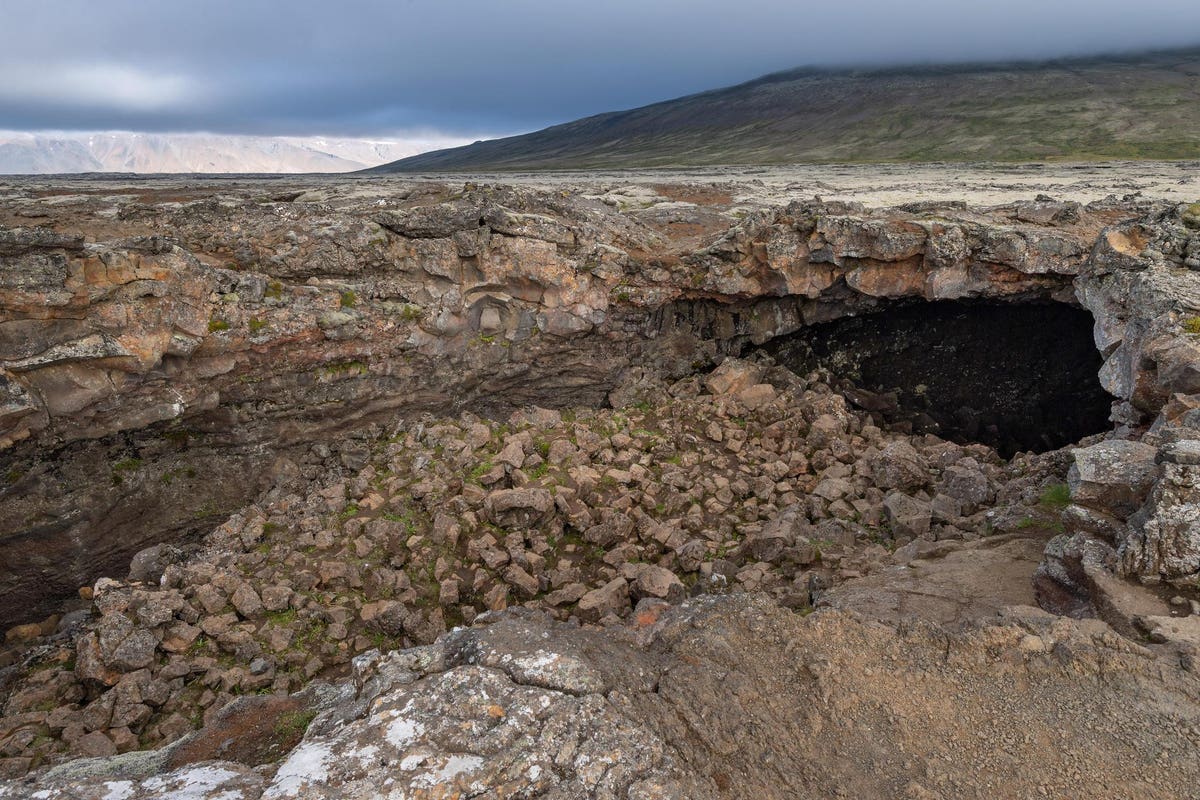 “The sun fades away, the land sinks into the sea, the bright stars disappear from the sky, as smoke and fire destroy the world and flames consume the sky.” – The end of the world according to the Sagas, the oldest collection of Icelandic myths.

Surtshellir, an almost one mile long lava cave in the interior of Iceland, contains a unique Viking Age archaeological site located nearly 1,000 feet from its entrance and more than 30 feet below the surface of the Hallmundarhraun lava field. The lava field formed almost 1,100 years ago when a nearby volcano erupted. Surtshellir and Stefanshellir, an adjacent cave, are lava tubes, which form when fresh molten rock flows through an existing field of cooled lava. At the time of the eruption, the Vikings had recently colonized Iceland and the sight of the eruption must have been fascinating yet unsettling for the newly arrived settlers. Liquid fire slowly giving birth to a new land – as seen today at the ongoing eruption on Iceland’s Reykjanes peninsula.

Based on radiocarbon and tephrochronological (a dating method involving ash layers of known eruption) dates, soon after the lava cooled, the Vikings entered the lava tube and constructed a boat-shaped structure made out of rocks. Within this structure, the Vikings would have burned animal bones, including those of sheep, goat, cattle, horses and pigs. In a study published in the Journal of Archaeological Science, a research team suggests that they performed this ritual to ward off Ragnarök, the fiery end of the world according to Icelandic mythology.

Since the 1750s, the site has been interpreted as an outlaw shelter, yet in the 12th-13th centuries it was associated with actions directed towards an elemental being – Surtr – for whom the site was named. Surtr is a fire giant in Viking Age myths. He was present at the world’s creation, will survive the last winter preceding the world’s end, and in the battle of Ragnarök he will kill the last of the gods and then engulf the world in fire to burn everything to ashes – like a volcano.

Maybe the Vikings performed sacrificial ceremonies inside the lava cave hoping to appease Surtr, so that he would refrain from destroying the world. Another possibility is that the sacrificed animals were meant to strengthen Freyr, a Viking fertility god who will fight Surtr during Ragnarök.

These activities ended shortly after Iceland’s conversion to Christianity around 1,000 to 900 years ago. Even when the Icelandic people adopted the new religion, they still associated the cave with the end of the world. One Icelandic tradition considers the cave to be “the place where Satan would emerge on Judgment Day,” and according to the Sagas the world’s end by Surtr’s fire may be postponed, but never avoided.

Drumming And Dancing Found To Be The Healthiest Of The Performing Arts
Apple announcements at WWDC show augmented reality is still its ‘next big thing’
Apple envisions a smart home where users can unlock the front door with their iPhone
Reply to: Perovskite decomposition and missing crystal planes in HRTEM
We have the first-ever 3D map of our Solar System’s heliosphere, and it’s amazing