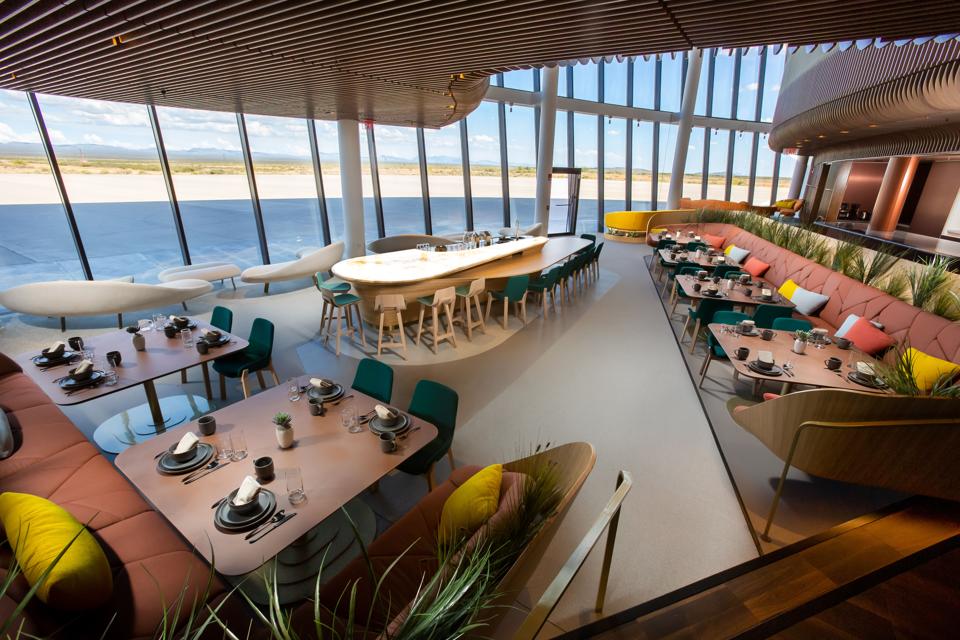 Richard Branson’s Virgin Galactic unveiled the interiors of its new New Mexico spaceport Thursday, giving the public a glimpse of how the first $250,000-ticket tourists will spend their time before boarding suborbital space flights next year.

The company’s new digs, which it calls the “Gateway to Space,” are part of the state-run Spaceport America in Las Cruces, NM, which also hosts facilities for SpaceX, EXOS Aerospace and other companies.

Within the next few weeks, Virgin’s carrier aircraft will fly out to the company’s test facilities in the Mojave to pick up the company’s spacecraft, the VMS Unity and take it back to New Mexico. Then the company will begin a series of test flights as the company edges its way towards its first commercial flight.

When those first commercial flights begin, Virgin Galactic likely will have broken into another frontier, becoming the first publicly-traded space tourism company. In July, Virgin Galactic announced it will merge with Social Capital Hedosophia, which will invest $800 million for a 49% stake in the merged company, and will trade on the New York Stock Exchange.

Virgin Galactic currently has reservations for 603 spaceflights, and says that it has received $80 million in deposits.  The company stopped actively marketing those tickets in 2014, though it plans to begin offering new tickets once commercial space flights are underway, likely for prices higher than $250,000.

Despite the price tag, the company has reason for optimism. It says it received over 2,500 inquiries for reservations after its spacecraft’s first successful flight into space in December 2018. And Whitesides says the unveiling of its New Mexico spaceport is an important milestone to getting those customers into space.

The interior designs of the Gateway To Space evoke a retro, 1960s vibe, but also feature 21st century touches like an interactive walkway and, of course, a barista spot to get a latte. The first floor, named Gaia, will be the social hub of the spaceport, where the company’s customers and families can mingle. The second floor, named Cirrus, is where the operations center and mission control is located. The third floor, which hasn’t yet been opened, will be a lounge for the company’s spaceflying customers.

“Each floor developed has a nice story connecting it back to social activity on Earth,” says designer Jeremy Brown. “Then moving through the mission control part of the building with lighter material references there.”

Once they’re done waiting, Virgin Galactic customers will climb on board the Unity, which will be attached to the underbelly of the carrier aircraft Eve. The airplane will fly the spacecraft up to about 50,000 feet, whereupon the spacecraft will detach and launch its rocket into space. Passengers will be able to see space and the Earth from their seats, and then leave them for a few minutes to experience weightlessness. Then they’ll strap back in and the spacecraft will head back to Earth. The total duration of the flight from takeoff to landing will be just around 3-4 hours.