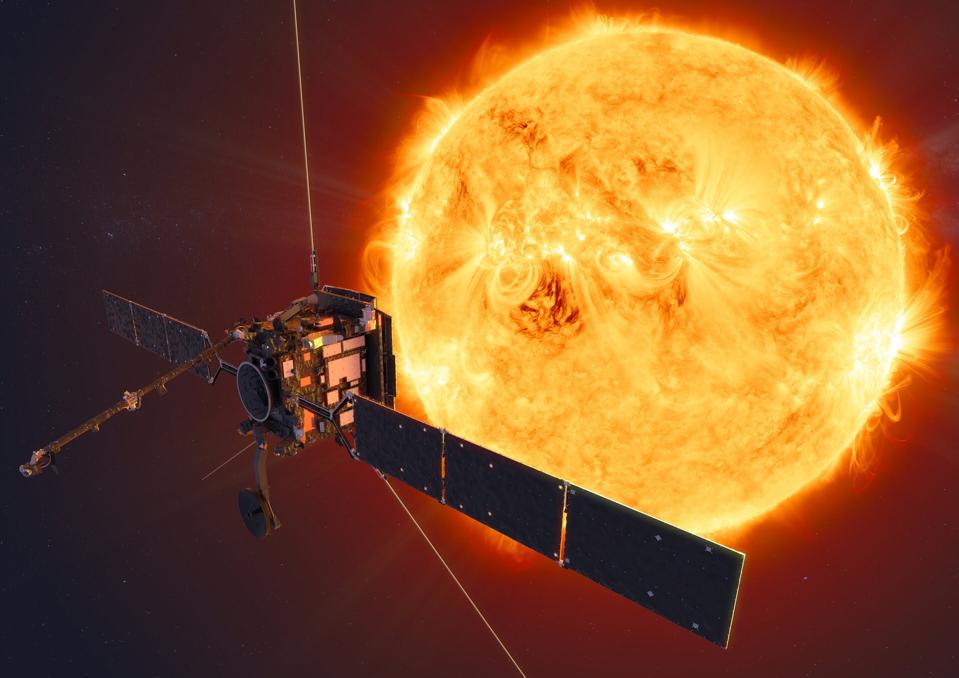 Scientists have just received the first-ever photos of explosions on the Sun taken by the Solar Orbiter probe.

It’s taken a few months for those images to reach Earth because Solar Orbiter was making a close flyby of the other side of the Sun when it took the groundbreaking images. That made the data-rate very low.

However, with the data now received, scientists have been able to compare its view with that of two other satellites to create the first-ever 3D view of a solar event.

What is a coronal mass ejection?

A CME is a periodic and colossal eruption of particles from the Sun’s outer atmosphere—its corona—that blast out into the Solar System.

It’s CMEs that scientists are worried about then they warn of dangerous “space weather” that can overload power grids, interrupt radio signals and damage satellites in low-Earth orbit.

What is Solar Orbiter?

A space mission of international collaboration between the European Space Agency (ESA) and NASA, Solar Orbiter was, on February 10, 2021, performing a routine test of its remote sensing instruments.

By lucky chance its managed to capture the two CMEs from behind the Sun at the same time as they were captured by ESA’s Proba-2 and the ESA/NASA Solar and Heliospheric Observatory (SOHO) from the ‘front’ side of the Sun.

What is Solar Orbiter doing?

Expect more of these stunning images of the CMEs from Solar Orbiter when it begins its science operation this November. Its mission is to return unprecedented close-up observations of the Sun from above and below its poles—images that scientists have not been able to collect before.

The hope is that solar scientists can use the Solar Orbiter’s data to figure out exactly when the Sun appears to have a roughly 11-year cycle that sees it wake and wane.

That’s just over a quarter of the distance from the Sun to Earth.

After that there are successive flybys to a similar distance every five or six months between 2022 and 2028.

So for this little spacecraft, it’s just the beginning of its “grand tour” of the inner Solar System.