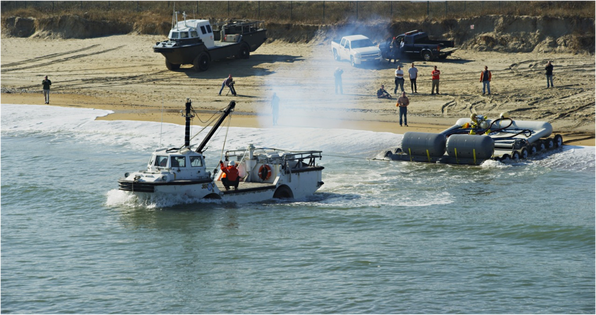 Using the power of ocean waves, innovators from Boston, U.S., have developed a technology that can produce fresh water off-grid and without the costly infrastructure of desalination plants.

This invention could help many of the 2.1 billion people around the world who struggle to access safe drinking water, most of those in low-income countries.

Importantly, it fills a gaping hole between industrial-scale utilities that are costly and time-consuming to build, and micro-scale solutions for individual households. The only technology currently offered in between involves diesel-powered desalination systems.

And Wave2O can be delivered competitively because it uses “free energy from a consistent and inexhaustible renewable energy resource: ocean waves,” says Ceberio.

The group was selected as a finalist for MIT’s Solve Challenge: “How can coastal communities mitigate and adapt to climate change while developing and prospering?”

The plant, which has been under development for 10 years, includes several Wave Energy Converters (WECs) and 40-foot containers. One of these containers produces fresh water and the others contain equipment that produces electricity (Wave2E TM).

To generate power, a flap moves with the waves and sends seawater – sourced away from contamination off-shore – and the power generated to a standard reverse osmosis unit. The energy can also be diverted for other purposes.

“It is modular so we can do whatever the customer needs,” Ceberio explains. “Even better, once it is installed, you can shuffle the WECs to allocate more to water or power production depending on the wave energy resources or the time of day.”

About 35% of the water is filtered and the rest is released back into the ocean using a manifold that maximizes the dispersion. This relatively low recovery rate produces low brine salinity with several advantages including lower maintenance, extended membrane life and minimal impact on marine flora and fauna when back in the sea.

The smaller module can produce 500 cubic meters of water per day, depending on wave energy – that’s half a million liters, enough to supply five to 10 thousand people’s personal and domestic needs.

But there’s no limit to the size of the system, according to Ceberio, who explains that a standard commercial sized plant would produce on average 4,000 cubic meters (4 million liters) of water per day, supplying 40,000 people or more.

Cape Verde, an archipelago off the west coast of northern Africa, is the target launch market. This group of islands suffers from severe water scarcity. It relies on diesel-electric desalination systems to supply 85% of its water supply, for which it must import all the fuel.

As a result, Cape Verde’s water costs are one of the highest in the world at $4.42 per cubic meter. In comparison, preliminary studies show that Wave2O can produce the same amount of water for $1.25 – nearly a quarter of the price.

The system was tested in North Carolina with a country like Cape Verde in mind – all the equipment can be transported by container, put together on the beach and installed with relatively little effort or infrastructure.

“For this deployment, it took us only two hours to pull the system into the water, attach it to the bottom of the ocean and, in that case, produce electricity,” says Ceberio.

By eliminating the need for diesel generators, the invention not only saves money but reduces carbon dioxide emissions.

“Each 4,000 [cubic meter per] day plant that displaces an equivalently sized diesel-powered plant will cut CO2 emissions by 4,300 tons per year,” explains Ceberio, “the equivalent of taking 936 cars off the road or of the carbon sequestered by 2,070 hectares of forest.”

He also notes that it can limit exploitation and contamination of land water sources, which will help preserve biodiversity, and address the unsustainable water-energy nexus by reducing current global practices of using water to produce power.

The only limitations include wave energy availability, the topology of the ocean floor, land use and local regulations.

Reflecting its potential, the project has support from organizations including the U.S. Department of Energy, the African Development Bank, the European Commission, the United Nations Industrial Development Organization and many more.

Ceberio is excited about the possibilities.

“We believe we are developing a breakthrough technology that could potentially impact hundreds of millions of people globally, especially those who really need it.”