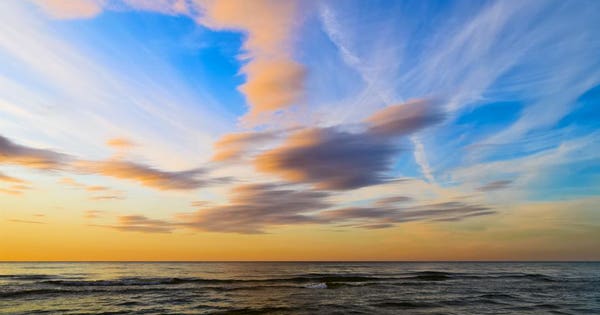 One of the most confounding and terrifying aspects of predicting our future climate is the ‘positive feedback’ that is driven by climate change and the overall warming of the planet. Don’t let the name fool you: these impacts are far more negative than positive for earth’s ecosystem. Just one example of what might be more accurately called an “amplifying feedback“ is the way warming temperatures melt Arctic ice, which is then no longer there to reflect sunlight. That energy is absorbed by the darker-colored ocean instead, adding to cumulative heating of our global system.

And that’s just one example.

Now, new research suggests that another such feedback loop could explain a rapid and previously mysterious warming that took place over 50 million years ago. More importantly, the study warns that we might be on the verge of triggering the same cycle again.

“For the future, our results suggest that stratocumulus decks may break up if CO2 levels continue to rise,” reads the paper out today in Nature Geoscience.

Translation: If levels of carbon dioxide and global temperatures continue to rise as in recent decades, the low clouds that cover a significant fraction of our oceans at any given moment will break up. Without the bright, fluffy rolling decks there to bounce the sun’s energy back into space, it will instead be absorbed.

If those stratocumulus decks disappear, which the researchers say could happen within a century under the worst-case scenario, the result may be what happened during that period millions of years ago, known as the Paleocene-Eocene Thermal Maximum (PETM).  At that time 56 million years ago, global temperatures suddenly spiked, increasing by 8 eight degrees Celsius. For some time, there wasn’t exactly consensus on what unknown factor created such a dramatic spike, but that’s beginning to change.

“It’s quite clear at this point that the answer is clouds,” Matt Huber, a scientist at Purdue University, told Quanta.

He thinks the new research led by Tapio Schneider of CalTech and NASA’s Jet Propulsion Laboratory could be a key piece of the climate puzzle that links where the planet has been in the past with where we’re now steering it.

“The stratocumulus instability may explain how such hothouse climates can exist without implausibly high CO2 levels,” the paper explains.

In other words, we may get back to the prehistoric climate where equatorial regions were essentially too hot to be habitable and Arctic waters are almost pleasant without pumping crazy amounts of CO2 into the atmosphere. If we reach around 1,300 parts per million of CO2 in the atmosphere, as some models show occurring in the 22nd century, it could trigger the break-up of the stratocumulus cloud decks. If past is prologue, this could add an additional eight degrees Celsius of warming on top of what has already taken place at that point.

Suddenly our grandchildren could be on their way to living in a Jurassic Park-style climate.

So perhaps it’s not surprising that clouds have already been seen as a potential key to preventing the climate apocalypse for some time.

In the past, soot and other air pollution particulates were pumped into the atmosphere almost in equal amounts as CO2. The particulates help reflect the sun’s energy, while CO2 helps trap it in the atmosphere. An early hope was that the two would simply cancel each other out.

In the wake of smog-induced respiratory-health-related deaths in London in 1952, and ensuing legislation in favor of limiting emissions in the United States and Europe, ‘air quality engineering’ was developed to reduce combustion-related aerosol emissions,” explained atmospheric science professor Lynn Russell in a 2012 paper.  “But the reductions—without corresponding reductions in CO2 emissions—led to more warming.”

Geoengineering may offer the ability to essentially bring some of those man-made (or at least man-exacerbated) clouds back, but without the negative health impacts.

However it’s very early days when it comes to understanding the potential benefits and the unforeseen consequences of such engineered solutions.  But it’s clearly worth researching all avenues to keep CO2 levels and global temperatures down in order to keep those low, fluffy clouds from disappearing and sending us all back into prehistoric times.