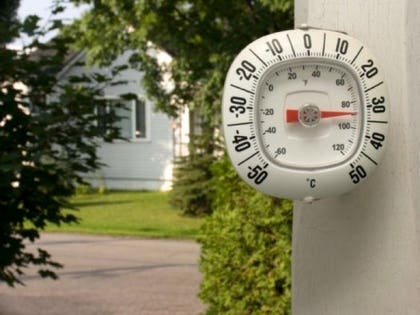 I typically write about contemporary weather and climate science from many perspectives. But at times, I just like to use my Forbes outlet to provide basic “weather 101” on topics that may be of interest to the reader. In this installment, I explore the concept of air temperature. You probably check the air temperature reading routinely to plan your day. What does an air temperature of 70 (or whatever) degrees F actually mean?

This essay was inspired by a discussion that I had with students a few months ago.  We were discussing the thermosphere, an upper layer of the Earth’s atmosphere between the mesosphere and the exosphere. In the thermosphere, temperatures can reach up to 4500 degrees F, according to NASA. I explained to the students that it would feel very cold if they stepped out of a spacecraft into the thermosphere without special clothing. They looked stunned. So what gives?

The physics of temperature and heat flow is called thermodynamics, and to measure temperature, we must delve into that world. Thermometers measure the change in property of a fluid or object such as electrical resistance, gas pressure in closed volume, or length. To do this, it is important to understand two important principles of physics:

According an excellent website at NASA’s Glenn Research Center,

Absolute zero represents the minimum molecular kinetic energy possible. This value, according to studies, is -273.16 degrees C. This is the lowest number on the absolute temperature scale called the Kelvin scale. Kelvin temperature is found by adding 273.15 to the Celsius value. A similar absolute scale called the Rankine scale uses the Fahrenheit scale.

I have provided you with enough background to finally answer the question about the thermosphere. In the thermosphere, the average kinetic energy of the molecules is very high, which means temperatures are too. The molecules are zipping around with a great deal of vigor. However, there are relatively few molecules to transfer heat to your body. Ok, what’s the difference between temperature and heat? The website EnergyEducationCa.com defines heat as:

the transfer of thermal energy between molecules within a system and is measured in Joules.[2] Heat measures how energy moves or flows. An object can gain heat or lose heat, but it cannot have heat.

Layers of the atmosphere

Quick Charge Podcast: September 18, 2021
U.S. generals planning for a space war they see as all but inevitable
The surprising reason the moon has fewer craters than it probably should
SpaceX just marked another huge milestone in the history of crewed spaceflight
Senate will grill tech execs after report that Instagram can harm teens’ mental health