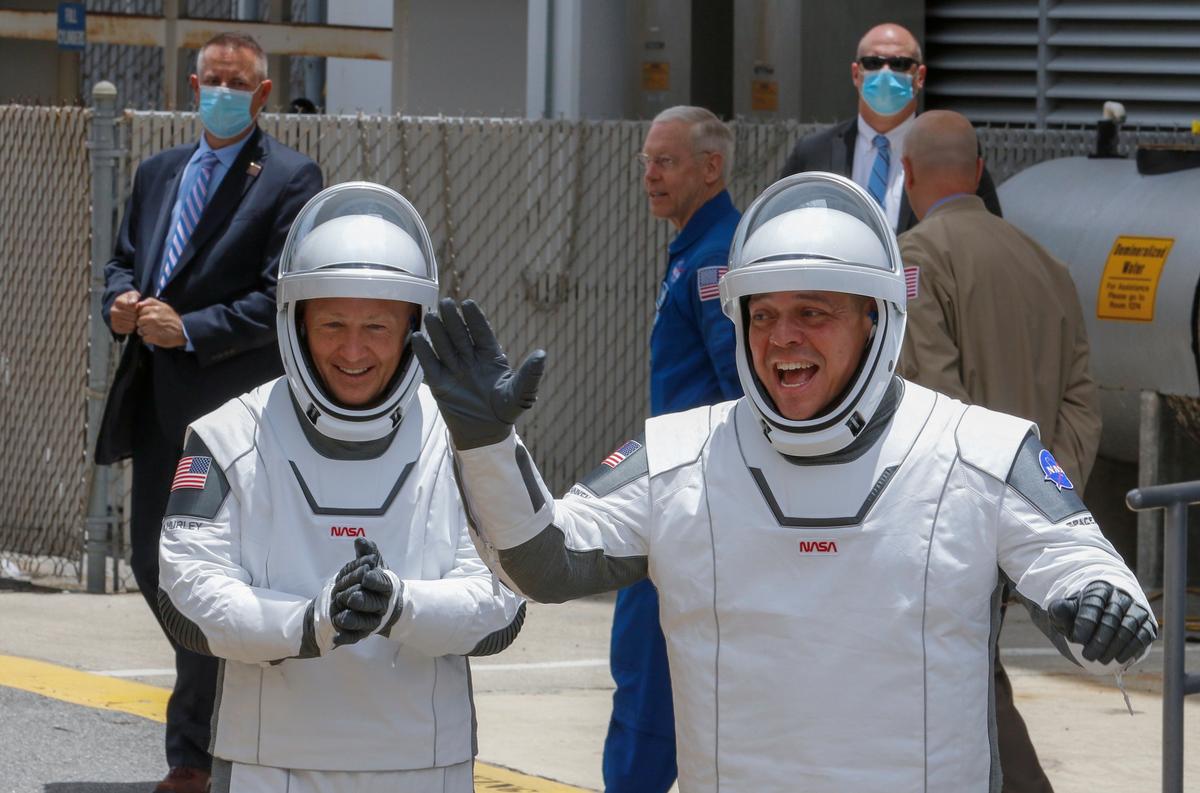 CAPE CANAVERAL, Fla. (Reuters) – SpaceX, billionaire entrepreneur Elon Musk’s private rocket company, was forced by foul weather to scrub a planned launch on Wednesday of two Americans into orbit from Florida, a mission that would be the first spaceflight of NASA astronauts from U.S. soil in nine years.

The countdown was halted 16 minutes and 54 seconds before the SpaceX Falcon 9 rocket was due to lift off from the Kennedy Space Center, propelling Doug Hurley and Bob Behnken on a 19-hour ride to the International Space Station. Mission managers cited “a number of weather violations” for scrubbing the flight.

The next launch window is set for Saturday afternoon, when SpaceX will make a second attempt to send the astronauts into orbit aboard the company’s newly designed Dragon Crew capsule.

The scrubbed launch came on a day with off-and-on rain over Florida. The National Weather Service had issued a tornado warning for the area. Mission managers were monitoring a number of ominous weather conditions, including the threat of lightning, even as crews began loading the rocket with fuel, when the countdown clock was stopped.

By then, Hurley, 53, and Behnken, 49, had already strapped into their Crew Dragon seats for a little more than two hours, after having made their way up a 265-foot-tall (80-meters) tower to the access bridge that leads to the capsule atop the Falcon 9 rocket.

A live NASA television broadcast livestreamed on the internet showed the two men, appearing calm, seated side by side in their helmeted white flight suits, as the launch postponement was announced. The two astronauts were to remain inside the capsule until crews finished unloading propellant from the rocket.

The astronauts were to have blasted off from the same launch pad used in 2011 by NASA’s final space shuttle flight, which was piloted by Hurley. Since then, NASA astronauts have had to hitch rides into orbit aboard Russia’s Soyuz spacecraft.

The SpaceX mission’s success is key to achieving what Bridenstine has called NASA’s top priority – resuming launches of American astronauts on American rockets from American soil.

For Musk, the first manned SpaceX launch would represent another milestone for the reusable rockets his company pioneered to make spaceflight less costly and frequent. It also would mark the first time that commercially developed space vehicles – owned and operated by a private entity rather than NASA – have carried Americans into orbit.

The last time NASA launched astronauts into space aboard a brand new vehicle was four decades ago at the outset of the shuttle program.

Musk, the South African-born high-tech entrepreneur who made his fortune in Silicon Valley, is also the CEO of electric carmaker and battery manufacturer Tesla Inc (TSLA.O).

The two astronauts are NASA employees under contract to fly with Hawthorne, California-based SpaceX. Plans call for them to remain at the space station for several weeks, assisting a short-handed crew aboard the orbital laboratory.

SpaceX, founded by Musk in 2002 and formerly known as Space Exploration Technologies, has never previously flown humans into orbit, only cargo.

SpaceX successfully tested Crew Dragon without astronauts last year in its first orbital mission to the space station. That vehicle was destroyed the following month during a ground test when a valve for its in-flight abort system failed, causing an explosion.

Reporting by Joey Roulette in Cape Canaveral, Fla.; Writing by Steve Gorman; Editing by Will Dunham

Huge ‘Lion’s Roar’ Superflare Seen From Japan Should Be A Wake-Up Call For Earthlings
Humans actually have an irrational preference for round numbers
A new study of dead suns finds how life on Earth might not exist without them
Native Americans Voyaged to Polynesia in Prehistoric Times, Genetics Suggests
A truly clean energy system runs on a clean conscience