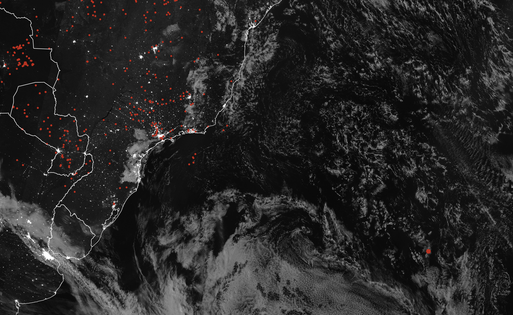 Most of us love a good ghost story, so seeing as its Halloween, I thought I’d try to find something suitably spooky, and geoscience-y, to share. Fortunately, I’ve found a doozy: the Twitter account of NASA’s Earth Observatory recently shared the story of a phantom fire that appeared in an unlikely place – the middle of the Atlantic Ocean.

You can check out the original post by EO’s Adam Voiland here, but I’ll try to add some extra context this time around. Either way, this tale’s too good not to retell.

High above our heads, the Suomi NPP satellite drifts, peering down at the planet’s surface. One of its instruments, the Visible Infrared Imaging Radiometer Suite (VIIRS), is – as the name suggests – pretty good at picking up on anomalous thermal signatures.

That’s not all it does. Whether it’s looking at the planet’s ice cover, its oceans and seas or its forests, mountains and valleys, it’s providing scientists at NASA with some rather beautiful reams of data. From the nighttime streetlights of the United States, to the sweeping, particulate-filled clouds over China, it’s nothing short of invaluable – and it’s extremely good at what it’s designed to do.

On July 14th 2017, however, it looked like it was having a bit of an off day. Several hundreds of kilometers east of the coast of Brazil, in the South Atlantic Ocean, it picked up on a potent thermal signature at night. Such anomalies are almost always fires, but this presented a problem: how could there be a huge fire in the sea? There’s nothing out there that could cause a fire that intense, so what the heck was it?

It turns out that the explanation is linked to a far greater mystery: the South Atlantic Magnetic Anomaly, or SAMA.

Earth, rather famously, has a magnetic field. Why it has one isn’t fully clear, but the basics are known. Earth has a liquid, iron-rich outer core that, thanks to the way the planet is cooling down, contains currents that move up and down in colossal ellipses. Thanks to the dynamo theory, which neatly links up electricity and magnetism, this creates a magnetic field, complete with north and south poles a bit like a bar magnet.

Most of this magnetic energy remains stuck beneath our feet, but at the magnetic poles – which, unlike the geographic poles, move slowly over time – gatherings of magnetic field lines streak out into space and circle back again. It’s at these points where the interaction between the magnetic field and the Sun’s incoming stream of energetic particles is strongest, which is why we get the aurorae there.

A magnetic field isn’t just there to put on an ethereal show of multi-colored incandescence above our heads. Its ability to deflect powerful solar radiation means that critters and creatures on the surface isn’t constantly bombarded by it, so in a very real sense it’s a lifesaver.

As aforementioned, there’s plenty we don’t know about Earth’s magnetic field. Over considerably lengthy timescales, the field flips, although we aren’t sure why it does or precisely how often. When it inevitably does in the future, it could cause some problems: it’s preceded by a significant weakening of the magnetic field, which means some extra solar radiation will get through to the surface during that time. This may fry some electronic equipment, but nothing catastrophic will occur, despite what some may erroneously suggest. For more information on what will happen, I’d advise clicking here.

Either way, there’s no convincing evidence at all that the Earth’s magnetic field is “about” to flip, but that doesn’t mean it hasn’t got weak spots. In fact, there’s a distinct dip in the planet’s magnetic field strength over the South Atlantic.

SAMA, as it’s sometimes referred to, is a longstanding enigma. Its origins are unclear, and – as revealed by a recent, stunning study combining archaeology and geophysics – scientists know that it’s not a modern-day phenomenon, but one that’s been there for many millennia.

What is known is that it sits above a huge, warm, dense blob right at the boundary between Earth’s mantle and the liquid outer core. Seismic waves act rather strangely when they interact with what is technically called the African Large Low Shear Velocity Province. It’s one of two so-called thermochemical piles, the other being under the Pacific Ocean.

Although it’s conjecture for now, it’s thought that this odd lump may be compressing the liquid outer core, squashing it and perhaps perturbing those churning currents of iron. This might be why SAMA exists: Earth’s dynamo has a dent at this point.

Whatever the cause, SAMA is nothing less than a localized collapse of Earth’s magnetic field. This means solar radiation can sneak through this hole at a not-insignificant rate. The atmosphere blankets the surface from this stream, but satellites above it aren’t so shielded, which is why any that pass through this area have to have additional shielding.

VIIRS, aboard Suomi, may have thought it was looking at a strange fire in the middle of the sea back in the summer of 2017. Instead, it was picking up on a stream of SAMA-aided energetic particles zipping through the skies. There was no fire; it was a radiation phantom, playing tricks with the satellite’s highly sensitive instruments.

As Voiland’s piece notes, algorithms are designed to filter out these curiosities, but every now and then, a few can slip through, resulting in some rather fascinating ghosts in the machine.

Venture funding soared to record $64 billion in Q1
Adam Jonas Of Morgan Stanley: Tesla [TSLA] Is A Must Own. But What About Legacy Auto?
How Vaccine Companies Are Battling Covid-19 Variants
We decide how tomorrow will be by what we create today
DARPA selects Blue Origin, Lockheed Martin to develop spacecraft for nuclear propulsion demo