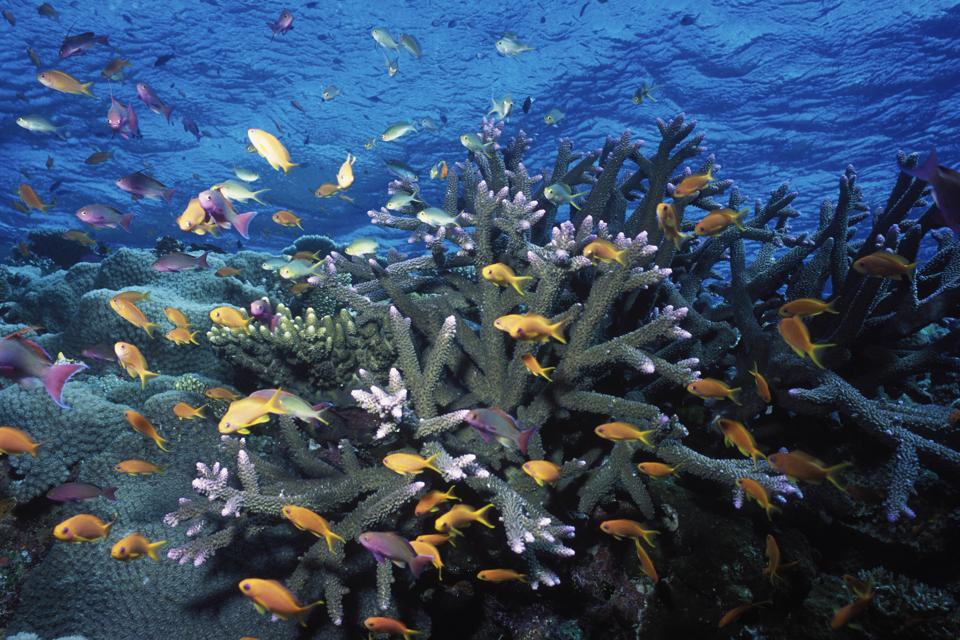 “Rock the Boat” by Blue Spotted Rays is one of the few songs — if not the only one — to be released both on vinyl as well as a paper in an academic journal.

The band is a motley crew of a geographer, a coastal researcher and two artists, who in 2018 spent some time on a research vessel at the Australian Great Barrier Reef. While on the ship, they worked on finding a new way to communicate the urgency of what they observed at the reef, and started experimenting with song. After the trip, participating artist Kim Williams wrote “Rock The Boat”.

The song includes lines such as “coral ain’t made for a boilin’ pot” and “we swim in a rising sea”. The sheet music is annotated with multiple footnotes that provide context for the lyrics in the form of scientific information and a bibliography.

With “Rock The Boat”, Blue Spotted Rays follow a long tradition of musicians who are inspired by the environment.

In 2017, Jennifer Publicover and colleagues at Dalhousie University, in Canada, interviewed several musicians about their environmentally-themed tunes to better understand the specific characteristics of climate music.

These musicians had all contributed music to a 2011 album called Playlist for the Planet, commissioned by the environmental non-profit David Suzuki Foundation. Publicover managed to speak with fourteen of the thirty musicians involved in the project, and learned a few interesting things about the way that they go about writing climate music.

First, the musicians mentioned that they approach the topic in the same way as they would write about other issues. From a songwriting point of view, a song about the planet is not that different from a song about relationships, work, or anything else they might normally write about. But for an environment-themed song to be able to connect and resonate with their audience, it requires certain characteristics. From the conversations with musicians, Publicover extracted five recommendations for a climate song to successfully engage its listeners: The music has to be of high quality, relevant to the audience and make use of different possible hooks. In addition, song-writers should write authentically about what they know and believe, and finally they should not use the song to preach their viewpoint.

Of these five, “Rock The Boat” meets most of the conditions. It uses several hooks, referencing not only papers but also pop culture (“Nemo likes the water cool, not hot”), and the music and recording are professionally produced. They inserted their own experience and expertise in the piece as well. However, with lines such as “if you want your reefs to stick around, better keep the carbon in the ground”, it doesn’t exactly follow the “don’t preach” recommendation.

According to the song’s footnotes, it was initially written with the specific goal to convince Malcolm Turnbull (then the Prime Minister of Australia) to not extract coal from the Galilee Basin in Queensland, so there was a reason for this very direct message.

But in the conversations Publicover had, musicians suggested that preaching a cause so directly might limit the effectiveness of the song. One Playlist for the Planet musician, Tara MacLean, was quoted in the study saying “The worst thing you can do is preach … Music is like an invitation to open up, and the moment that you start preaching to someone, that can close them.”

But even if “Rock The Boat” may be a bit direct, it can still have an impact, and writing it has already had an influence on the team that wrote it. “Song-writing has allowed new ideas and priorities to rise to the surface,” they write in their paper.

And when it comes to thinking about climate change, new ideas are always welcome.