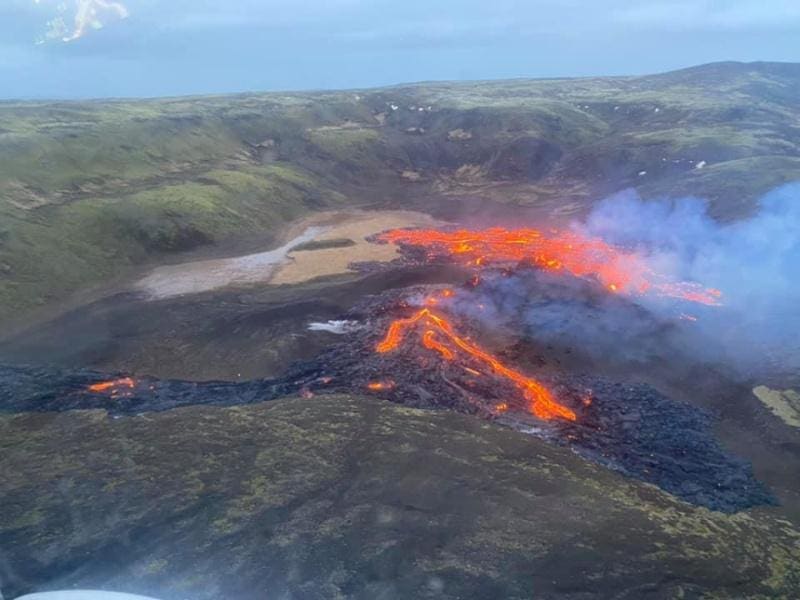 After several weeks of heightened seismic activity with well over 50,000 earthquakes, a volcanic eruption has started yesterday evening on the Reykjanes peninsula. The eruption started north-east of the town of Grindavík, in a valley called Geldingadalur near Fagradalsfjall mountain, about 30 kilometers (19 miles) south from Reykjavík, the capital and largest city of Iceland. Iceland’s Minister of Justice Aslaug Arna Sigurbjornsdottir shared an image of the night sky glowing bright red, illuminated by the lava.

First images taken during the night and early morning hours by the crew of a Coast Guard helicopter show a 2,6 km long slow-flowing lava flow, feed by a 200 to 500 meters (roughly 1,640 feet) long fissure eruption.

The highway between Reykjavík-Keflavík international airport and the capital area has been closed by police for the time being. Airspace in a 5 kilometer radius around the ongoing eruption was closed for unmanned aircraft and drones to avoid conflicts with first responders and scientists monitoring the developing situation. The Icelandic Police Department said it expected volcanic gas pollution to extend as far as the southern coast of the Ölfus municipality, where at least 2,000 people live, almost 50 kilometers (30 miles) away from Reykjavik. Local media reported that both inbound and outgoing air traffic had been halted from Keflavik International Airport since this morning, a precautionary step, as volcanic ash can damage plane engines. The Icelandic Meteorological Office issued a “code red” warning. A red warning includes the danger of plumes of volcanic ash in the higher layers of the atmosphere, possibly interfering with flight paths.

Exactly ten years ago, the Eyjafjallajökull volcano notoriously disrupting around 900,000 flights across Europe over a period of several weeks.

Volcanic ash is made up from fragments of rock and glass splitters. When this material is sucked by the compressor into the engines of a modern jetplane, it will melt in the 2,000°C hot combustion chamber, but quickly re-solidifies on the turbine blades, clogging and eventually blocking the engine.

Volcanic ash forms by two processes. Sudden and violent degassing of volatile magma, rich in volatiles like carbon dioxide, water vapor, and other volcanic gases, fragmenting the magma into tiny droplets, or magma encountering water or ice, resulting in steam eruptions. Volcanism on Iceland is characterized by basaltic magma with low concentrations of volatile gases. Eruptions are generally effusive, with lava fountains and flows but few explosions.

The eruption of Eyjafjallajökull happened under a glacier and caused a lot of ash, whereas the current eruption in the Geldingadalur valley is not under an ice sheet and as such likely won’t spew out much ash.