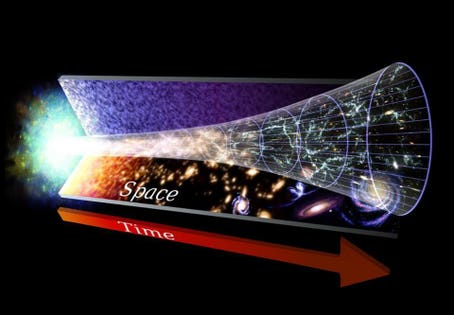 Looking out at our Universe today, we not only see a huge variety of stars and galaxies both nearby and far away, we also see a curious relationship: the farther away a distant galaxy is, the faster it appears to move away from us. In cosmic terms, the Universe is expanding, with all the galaxies and clusters of galaxies getting more distant from one another over time. In the past, therefore, the Universe was hotter, denser, and everything in it was closer together.

If we extrapolate back as far as possible, we’d come to a time before the first galaxies formed; before the first stars ignited; before neutral atoms or atomic nuclei or even stable matter could exist. The earliest moment at which we can describe our Universe at hot, dense, and uniformly full-of-stuff is known as the Big Bang. Here’s how it first began.

Some of you are going to read that last sentence and be confused. You might ask, “isn’t the Big Bang the birth of time and space?” Sure; that’s how it was originally conceived. Take something that’s expanding and of a certain size and age today, and you can go back to a time where it was arbitrarily small and dense. When you get down to a single point, you’ll create a singularity: the birth of space and time.

Only, there’s a ton of evidence that points to a non-singular origin to our Universe. We never achieved those arbitrarily high temperatures; there’s a cutoff. Instead, our Universe is best described by an inflationary period that occurred prior to the Big Bang, and the Big Bang is the aftermath of what occurred at the end of inflation. Let’s walk through what that looked like.

During inflation, the Universe is completely empty. There are no particles, no matter, no photons; just empty space itself. That empty space has a huge amount of energy in it, with the exact amount of energy slightly fluctuating over time. Those fluctuations get stretched to larger scales, while new, small-scale fluctuations are created on top of that. (We described what the Universe looked like during inflation previously.)

This continues as long as inflation goes on. But inflation will come to an end randomly, and not in all locations at once. In fact, if you lived in an inflating Universe, you’d likely experience a nearby region have inflation come to an end, while the space between you and it expanded exponentially. For a brief instant, you’d see what happens at the start of a Big Bang before that region disappeared from view.

In an initially, relatively small region, perhaps no bigger than a soccer ball but perhaps much larger, the energy inherent to space gets converted into matter and radiation. The conversion process is relatively fast, taking approximately 10-33 seconds or so, but not instantaneous. As the energy bound up in space itself gets converted into particles, antiparticles, photons and more, the temperature starts to rapidly rise.

Because the amount of energy that gets converted is so large, everything will be moving close to the speed of light. They will all behave as radiation, whether the particles are massless or massive doesn’t matter. This conversion process is known as reheating, and signifies when inflation comes to an end and the stage known as the hot Big Bang begins.

In terms of the expansion speed, you’ll witness a tremendous change. In an inflationary Universe, space expands exponentially, with more distant regions accelerating away as time goes on. But when inflation ends, the Universe reheats, and the hot Big Bang starts, more distant regions will recede from you more slowly as time goes on. From an outside perspective, the part of the Universe where inflation ends sees the expansion rate there drop, while the inflating regions surrounding it see no such drop.

Probability-wise, it’s extremely likely that from the perspective of whatever region of inflating space you’re in prior to the Big Bang, you’ll see inflation end in nearby regions many times. These locations where inflation ends will quickly fill with matter, antimatter, and radiation, and expand more slowly than the still-inflating regions do.

These regions will expand away from all the other locations where inflation still goes on exponentially, meaning they will very quickly recede from view. In the standard inflationary picture, because of this expansion rate change, there’s virtually no chance that any two Universes, where separate hot Big Bangs occur, will ever collide or interact.

Finally, the region where we will come to live gets cosmically lucky, and inflation comes to an end for us. The energy that was inherent to space itself gets converted to a hot, dense, and almost uniform sea of particles. The only imperfections, and the only departures from uniformity, correspond to the quantum fluctuations that existed (and were stretched across the Universe) during inflation. The positive fluctuations correspond to initially overdense regions, while the negative fluctuations get converted into initially underdense regions.

We cannot observe these density fluctuations, today, as they were when the Universe first underwent the hot Big Bang. There are no visual signatures we can access from that early on; the first one we’ve ever accessed come from 380,000 years later, after they’ve undergone countless interactions. Even at that, we can extrapolate back what the initial density fluctuations were, and find something extremely consistent with the story of cosmic inflation. The temperature fluctuations that are imprinted on the first picture of the Universe — the cosmic microwave background — gives us confirmation of how the Big Bang began.

What might be observable to us, however, are the gravitational waves left over from the end of inflation and the start of the hot Big Bang. The gravitational waves that inflation generates move at the speed of light in all directions, but unlike the visual signatures, no interactions can slow them down. They will arrive continuously, from all directions, passing through our bodies and our detectors. All we need to do, if we want to understand how our Universe got its start, is find a way to observe these waves either directly or indirectly. While many ideas and experiments abound, none have returned a successful detection so far.

Once inflation comes to an end, and all the energy that was inherent to space itself gets converted into particles, antiparticles, photons, etc., all the Universe can do is expand and cool. Everything smashes into one another, sometimes creating new particle/antiparticle pairs, sometimes annihilating pairs back into photons or other particles, but always dropping in energy as the Universe expands.

The Universe never reaches infinitely high temperatures or densities, but still attains energies that are perhaps a trillion times greater than anything the LHC can ever produce. The tiny seed overdensities and underdensities will eventually grow into the cosmic web of stars and galaxies that exist today. 13.8 billion years ago, the Universe as-we-know-it had its beginning. The rest is our cosmic history.

Orbit Fab gets award to test satellite refueling technology
Whiting Petroleum is just the ‘first domino’ to fall in US shale wipeout, strategist says
Apollo 11: Landing on the Moon
Mathematical proof that rocked number theory to be published
Munich’s Oktoberfest is a real gas