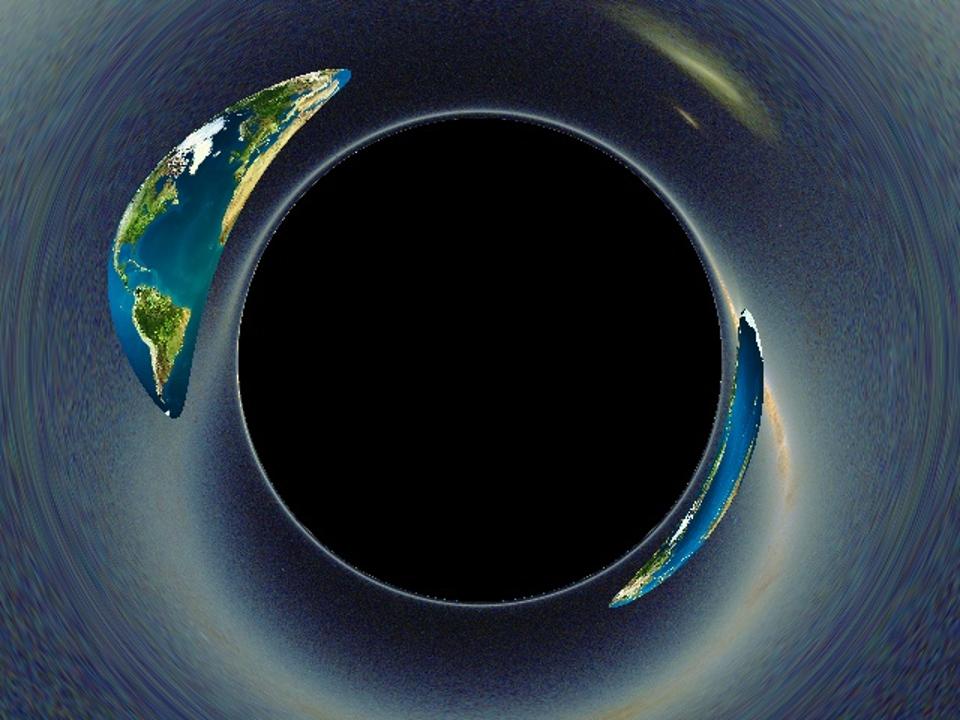 One of the most remarkable facts about the Universe is this: in the absence of any other forces or interactions, if you start with any initial configuration of gravitationally bound masses at rest, they will inevitably collapse to form a black hole. A straightforward prediction of Einstein’s equations, it was Roger Penrose’s Nobel-winning work that not only demonstrated that black holes could realistically form in our Universe, but showed us how.

As it turns out, gravity doesn’t need to be the only force: just the dominant one. As the matter collapses, it crosses a critical threshold for the amount of mass within a certain volume, leading to the formation of an event horizon. Eventually, some time later, any object at rest — no matter how far away from the event horizon it initially was — will cross that horizon and encounter the central singularity.

If, somehow, the electromagnetic and quantum forces holding the Earth up against gravitational collapse were turned off, Earth would quickly become a black hole. Here’s what we would experience if that were to happen.

Right now, the reason Earth is stable against gravitational collapse is because the forces between the atoms that make it up — specifically, between the electrons in neighboring atoms — is large enough to resist the cumulative force of gravity provided by the entire mass of the Earth. This shouldn’t be entirely surprising, as if you considered the gravitational versus the electromagnetic force between two electrons, you’d find that the latter force was stronger by about a factor of a whopping ~1042.

In the cores of stars that are massive enough, however, neither the electromagnetic force nor even the Pauli exclusion principle can stand up to the force inciting gravitational collapse; if the core’s radiation pressure (from nuclear fusion) drops below a critical threshold, collapse to a black hole becomes inevitable.

Although it would take some sort of magical process, such as instantaneously replacing Earth’s matter with dark matter or somehow turning off the non-gravitational forces for the material composing Earth, we can imagine what would occur if we allowed this to happen.

First off, the material composing the solid Earth would immediately begin accelerating, as though it were in perfect free-fall, towards the center of the Earth. In the central region, mass would accumulate, with its density steadily rising over time. The volume of this material would shrink as it accelerated towards the center, while the mass would remain the same.

Over the timescale of mere minutes, the density in the center would begin to rise fantastically, as material from all different radii passed through the exact center-of-mass of the Earth, simultaneously, over and over again. After somewhere between an estimated 10 and 20 minutes, enough matter would have gathered in the central few millimeters to form an event horizon for the first time.

After just a few minutes more — 21 to 22 minutes total — the entire mass of the Earth would have collapsed into a black hole just 1.75 centimeters (0.69”) in diameter: the inevitable result of an Earth’s mass worth of material collapsing into a black hole.

If that’s what the Earth beneath our feet does, however, what would a human being on Earth’s surface experience as the planet collapsed into a black hole beneath our feet?

Believe it or not, the physical story that we’d experience in this scenario would be identical to what would happen if we instantly replaced the Earth with an Earth-mass black hole. The only exception is what we’d see: as we looked down, a black hole would simply distort the space beneath our feet while we fell down towards it, resulting in bent light due to gravitational lensing.

However, if the material composing the Earth still managed to emit or reflect the ambient light, it would remain opaque, and we’d be able to see what happened to the surface beneath our feet as we fell. Either way, the first thing that would happen would be a transition from being at rest — where the force from the atoms on Earth’s surface pushed back on us with an equal and opposite force to gravitational acceleration — to being in free-fall: at 9.8 m/s2 (32 feet/s2), towards the center of the Earth.

Unlike most free-fall scenarios we experience on Earth today, such as a skydiver experiences when jumping out of an airplane, you’d have an eerie, lasting experience.

As you can see from the illustration above, the size of the arrows — as well as the speed that they move at — increases as we get closer to the central singularity of a black hole. In Newtonian gravity, which is a good approximation as long as you’re very far away from the event horizon (or the equivalent size of the event horizon), the gravitational acceleration you experience will quadruple every time your distance to a point halves. In Einsteinian gravity, which matters as you get close to the event horizon, your acceleration will increase even more significantly than that.

If you start off at rest with respect to the center of Earth, then by the time you’ve:

and while you might only be a millisecond from the event horizon, you’ll never get to experience what it’s like to get there.

That’s because your body, as you fall closer and closer to the center of the collapsing Earth, starts to experience enormous increases in tidal forces. While we normally associate tides with the Moon, the same physics is at play. Every point along any body in a gravitational field will experience a gravitational force whose direction and magnitude are determined by their displacement from the mass they’re attracted to.

Here on the surface of Earth, these tidal forces on a human being are minuscule: a little less than a millinewton, or the gravitational force on a typical small earring. But as you get closer and closer to Earth’s center, these forces octuple each time you halve your distance.

By the time you’re 99% of the way to Earth’s center, the force pulling your feet away from your torso and your head away from your feet works out to about 110 pounds, as though the equivalent of nearly your own body weight was working to pull you apart.

When you experience a force on your body that’s equivalent to the gravitational acceleration on Earth — or a force that’s equal to your weight — scientifically that’s known as “1g” (pronounced “one-gee”). Typically, humans can only withstand a handful of gs over a sustained period of time before either lasting damage occurs or we lose consciousness.

Above that threshold, you’re headed for trauma and possibly death.

By the time you’ve reached about 25 kilometers from the central singularity, you’ll cross a critical threshold: one where these tidal forces will cause traumatic stretching your spine, causing it to lengthen so severely that the individual vertebrae can no longer remain intact. A little farther — about 14 kilometers away — and your joints will begin to come out of your sockets, similar to what happens, anatomically, if you were drawn-and-quartered.

In order to approach the actual event horizon itself, you’d have to somehow shield yourself from these tidal forces, which would rip your individual cells apart and even the individual atoms and molecules composing you before you crossed the event horizon. This stretching effect along one direction while compressing you along the other is known as spaghettification, and it’s how black holes would kill and tear apart any creature that ventured too close to an event horizon where space was too severely curved.

As spectacular as falling into a black hole would actually be, if Earth spontaneously became one, you’d never get to experience it for yourself. You’d get to live for about another 21 minutes in an incredibly odd state: free-falling, while the air around you free-fell at exactly the same rate. As time went on, you’d feel the atmosphere thicken and the air pressure increase as everything around the world accelerated towards the center, while objects that weren’t attached to the ground would appear approach you from all directions.

But as you approached the center and you sped up, you wouldn’t be able to feel your motion through space. Instead, what you’d begin to feel was an uncomfortable tidal force, as though the individual constituent components of your body were being stretched internally. These spaghettifying forces would distort your body into a noodle-like shape, causing you pain, loss of consciousness, death, and then your corpse would be atomized. In the end, like everything on Earth, we’d be absorbed into the black hole, simply adding to its mass ever so slightly. For the final 21 minutes of everyone’s life, under only the laws of gravity, our demises would all truly be equal.

A Major Ice Storm Will Hit Parts Of Oklahoma And Texas This Week
NASA probe has collected a bit too much asteroid dust and is now leaking its treasure
What Is A ‘Blue Moon’ And When Is The Next One?
Apple says some AirPods Pro have sound problems, will replace for free
Giant Asteroid Survivor of Failed Planet Discovered to Be Slowly Rusting in Space