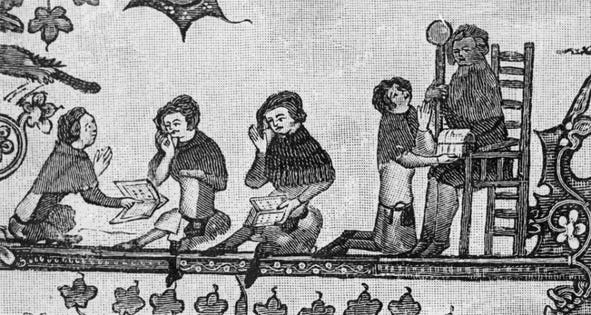 Every historical period has its “zombie myths” – ideas so ingrained into the popular imagination that they’re almost impossible to kill, ones that rear their ugly heads again and again, as if they’ve returned from the dead. The European Middle Ages have their own myths and so are no different from any other period in this regard.

One particularly odd (and persistent) myth about the medieval world, recently brought back to life in the pages of The Economist, is the idea that childhood “didn’t exist” in the Middle Ages and that parents had a “relative lack of interest” in their offspring.

By studying surviving sources, in both text and image, scholars of the European Middle Ages have been able to develop a much more complex (and rigorous) understanding of what medieval families were actually like. Here, the truth is much richer than the myth.

Over email, Prof. Miriam Shadis of Ohio University told me that the idea of not caring about children in the European Middle Ages has much to do with a more general struggle between “sameness and difference” when talking about the medieval past. Were they like us or were they not like us?

In the case of children, we see their staggering (?) mortality rate and wonder about how emotionally attached a parent could be in the face of it. Then, we put that next to a wide variety of medieval cultural practices that seem so strange to us today, and can easily leap to conclusions.

For example, when we try to justify things such as:

“cradle betrothals, child oblation, the appearance of an unwillingness to name children (especially daughters), reliance on wet-nursing, etc., we tend to explain it by thinking that if medieval parents were willing to do this, to thrust their children into seemingly adult environments, then they must not have thought of their children as children.”

This line of thinking, however, leads us into problems because it ignores context. It ignores the fact that the practices described above belonged to a tiny segment of society and emerged from a certain kind of political necessity. In addition, we have ample evidence of parents doing the opposite – “taking extra care to preserve their children’s mental and physical status as children.”

In other words, there’s lots of evidence that children in the European Middle Ages were protected, loved, and recognized as different from adults. We have numerous portrayals of adults allowing children to play, of a mother’s heart-rending grief at the death of a child, of parents behaving in expected ways that we can put alongside those moments when parents behaved in ways unexpected for us in the 21st century.

Prof. Shadis concluded that we “still have a long way to go to fully appreciate the medieval attitude toward childhood because it will always be chronologically and culturally specific.” In other words, the past is simply different from where we are now and it takes a lot of work – and training – to first understand it on its own terms, even before we can arrive at any conclusions. But scholars such as  Barbara Hanawalt, Nicholas Orme, Ronald Finucane, and Daniel T. Kline, and many others are leading the way.

In the end, we today love the idea of progress – that things “now” are better than things were “then.” But the reality of history is much more complex. History simply doesn’t move in that way. It doesn’t go from “worse” to “better,” just from “different” to “different.”

This is a truly important point to grasp because, when we do understand that key point, we realize that the value judgment we attach to either of those “differents” tells us more about us making those judgments than the people we’re judging. This perhaps tells us something about our expectations but little about their realities.

In this specific case, if we nod agreeably along with the idea that medievals didn’t value their child but also agree that modernity has made an “economically useless but emotionally priceless child” then what value are we – really – placing on our own children?

The 2020 GreenBiz 30 Under 30
Agora starts life as a public company by more than doubling to $50 a share
Northrop Grumman receives $222 million contract to update aging missile-warning satellites
In a moving gesture, NASA names agency headquarters after ‘hidden figure’ Mary Jackson
From the lab to the courtroom – Physics World