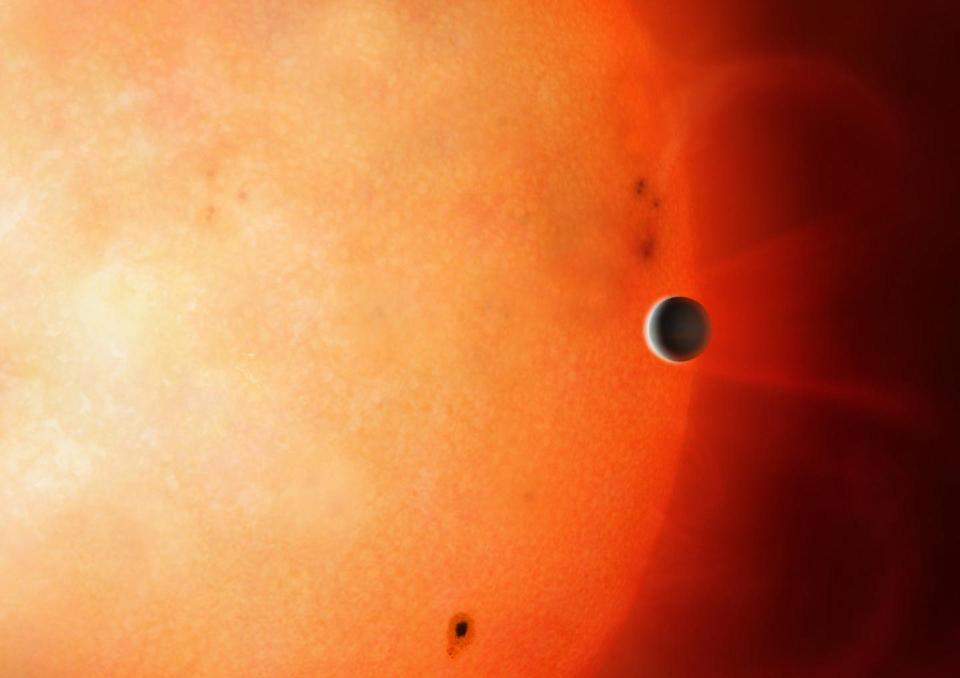 When we take a look at the planets in our Solar System, there’s a pretty clear difference between the four inner, rocky worlds and the outer, gaseous, giant planets. Mercury, Venus, Earth and Mars are all small, low in mass, and dense, with atmospheres that represent only a tiny fraction-of-a-percent of the planet’s overall matter. On the other hand, Jupiter, Saturn, Uranus and Neptune are comparatively giant, heavy, but diffuse, with the majority of their mass contained in an enormous, gas-rich envelope made mostly of hydrogen and helium.

But deep inside the giant worlds of our Solar System, beneath the various layers of volatile gases, lies a massive core rich in heavy elements. Each one contains a rocky core that’s significantly more massive than any of the “rocky” planets in our Solar System, with the gravitational force sufficient — at their great distances from the Sun — to hold onto the light elements in their outer atmospheres. But not every gas giant is so lucky; some of them should be too close to their parent stars, where their volatile gas atmospheres are boiled away. Here’s what’s left behind.

If we want to understand how our Solar System came to be — or any solar system in the Universe — we have to rewind the clock all the way back to when they first form. We start with a cloud of cool gas that begins to collapse under its own gravity, which is what’s needed to trigger the formation of new stars. Any one system will result from the fragmentation of a cloud into a small chunk, which will preferentially collapse along the shortest dimension first. As long as the enough of the gas can cool sufficiently, you’ll wind up with one or more stars forming near the central location.

But in the more outer regions, a number of different effects all compete for dominance. The outer material also collapses along its shortest direction, leading to the formation of a protoplanetary disk. Collisions between various particles pull the heavier, denser ones closer to the center, while leaving the lighter, less dense ones more evenly distributed. Heat from the central proto-star radiates outward, blowing off the lightest, least dense material closest to the proto-star itself. And gravitational instabilities attempt to grow, while random collisions blast proto-planets apart and gravitational interactions eject a significant fraction of them.

In the cosmic race to form planets from this material before the central star(s) become too hot and luminous, blowing the planet-forming material out of the solar system entirely, there are winners and losers. From a planetary perspective, the “winners” meet the International Astronomical Union’s definition of a planet, as extended to exoplanetary systems. This includes:

While the original 2006 definition unceremoniously resulted in the “demotion” of then-planet Pluto, causing some controversy, subsequent work by planetary astronomers and exoplanet scientists have validated the usefulness of this definition. If you’re large enough, massive enough, dominant enough, and in the right location in your solar system, congratulations: you’re a planet.

When it comes to how to classify these worlds, however, scientists didn’t find what they were expecting. In the early stages of exoplanet astronomy, many suspected that the planets we’d find around other stars would be similar to the ones in the Solar System. Very quickly, however, that idea was turned on its head, as the first planets that came back were:

These so-called “hot Jupiters” were the first types of surprising exoplanets discovered, but were far from the last. The most common planet type found was actually in between the sizes of Earth and Uranus, causing astronomers to invent a new category: either “super-Earth” or “mini-Neptune,” depending on who you ask.

These initial categories, unfortunately, were biased by our own expectations, and didn’t necessarily represent anything that was physically real other than our preconceived prejudices. Since we began detecting exoplanets directly some 30 years ago, we’ve catalogued more than 4,000 of them, learning unprecedented information about their masses, radii, and where in orbit around their parent star they form.

Although the science of how these planets form remains in the early stages, we at least have a working hypothesis. From the initial gravitational instabilities in a protoplanetary disk, the following steps can occur:

There appears to be a threshold: once the mass of your core gets to about 10 Earth masses or more, it will start to accrue large amounts of hydrogen and helium very quickly, leading to the possibility of it growing into a gas giant with self-compression. Below that threshold, and you might still make it to a hydrogen/helium envelope, but you’re more likely to be Neptune-sized than Jupiter-sized.

In our own Solar System, the cores of Neptune and Uranus failed to meet this threshold, while Jupiter likely passed it quite early. Saturn is a sort of in-between case, as its core has an uncertain mass that may fall either below or above that threshold, but is close in either case.

But in other solar systems, there are a few outliers that don’t follow these trends exactly. In particular, there are quite a few exoplanets known that are between 1 and 2 Earth radii, but can be many times the mass of Earth: up to 20 Earth masses or so!

That’s like having a planet equal to the mass of Neptune or Uranus, but contained in a volume that’s only a few times larger than Earth’s. In other words, these planets have to have densities comparable to or even greater than our own planet’s, meaning they must be composed almost entire of rocky/metallic material.

Planets such as this, interestingly enough, are almost exclusively found very close to their parent star. One such example is Kepler-107c, which comes in at 9.4 times the mass of Earth, but is just 60% larger in radius than our planet. This means its density is a whopping 2.3 times the density of Earth: denser, on average, than silver, lead, or even mercury. (Not Mercury the planet; mercury the periodic table element.)

The only reasonable way for this to form is if this exoplanet is the stripped core of a gas giant: one that has been too close to its parent star for too long to hang onto its hydrogen and helium envelope. Considering that this planet orbits a Sun-like star of similar mass and temperature to our own, but completes a full orbit in just 4.9 days, this is a relatively likely scenario. Many other such examples are known to exist, and studying planets like this can teach us what a “stripped core” of a gas giant might actually look like.

One of the most exciting prospects for a stripped-core world like this will come with the advent of 30-meter class telescopes on the ground: direct imaging of worlds just a little bit larger than Earth. That could include — even for small planet-star separation distances (if the star is close enough) — planets such as:

While we might need yet another leap forward in telescope technology, such as the space-based HabEx or LUVOIR proposals, to image an Earth-sized world around a Sun-like star directly, it’s definitely within the realm of possibility for the 2030s. If we choose to invest in it, we can learn not only about the Earth-like worlds in our vicinity, but the most spectacular planetary outliers as well.

For generations, we assumed that if there were planets around stars other than the Sun, they might follow the same generic pattern that we observe here: inner, rocky planets, outer, gas giant planets, with asteroids in between and icy worlds beyond them all. With the first few thousand planets under our belt, we now know that our Solar System isn’t typical at all, and that planets come in a wide variety of masses, radii, and orbital distances. Moreover, they fall into not two, but three general categories: rocky worlds, small gas giants with hydrogen/helium envelopes, and massive gas giants that exhibit self-compression.

But there are also outliers: cases where a planet experiences extreme conditions that creates an outcome that doesn’t land squarely in one of these three categories. In addition to planets on or near the borders between different categories, such as Saturn, there are planets whose growth is stunted or whose evolution is irrevocably altered by collisions, gravitational encounters, or an incredibly close proximity to their parent star. After decades of research, we’re finally close to understanding how planets in the Universe come to be. Soon, with upcoming technology, we’ll finally learn what these boiled-off gas giants are truly like.

Stealing Design Secrets from the Unexpected Master of Origami
4 things corporations should know about urban forestry projects
The origins of stainless steel date back almost 1,000 years earlier than we realised
The top cities for research in the Nature Index
Why nature is the next frontier for sustainable business