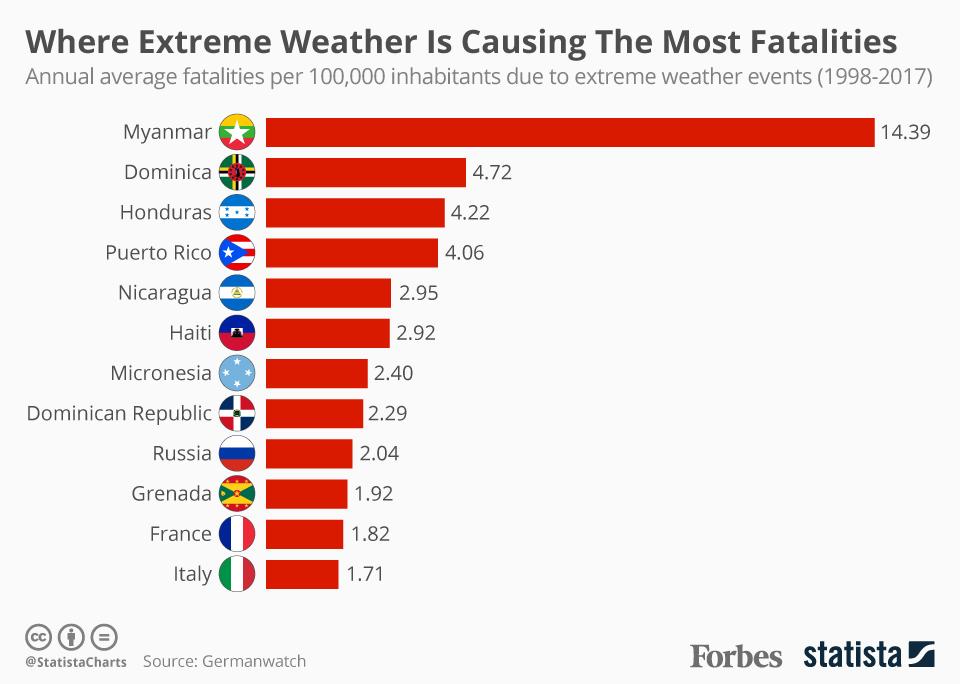 As the Earth continues to warm, extreme weather events are becoming more frequent and more severe as a result of the changing climate. People all over the world are now facing that reality and between 1998 and 2017, 526,000 lives have been lost due to extreme weather events while economic losses have amounted to $3.47 trillion (in PPP). That is one of the highlights of the Global Climate Risk Index released by environmental and development organization Germanwatch. Last year, Puerto Rico, Sri Lanka and Dominica suffered the greatest impact from natural disasters attributable to climate change. Puerto Rico and Dominica were severely hit by hurricane Maria in September 2017 and the former suffered 2,975 fatalities, devastation to its infrastructure and a wrecked power grid.

In the period from 1998 to 2017, Puerto Rico also suffered the greatest overall impact from extreme weather, losing 4,000 of its inhabitants and more than 4 percent of its GDP. When it comes to the number of fatalities during that 20-year period, however, Myanmar is far ahead of all other countries with just over 7,000 deaths per year on average. When it comes to the number of annual average fatalities per 100,000 inhabitants, Myanmar had 14.39, considerably higher than 4.72 in second-placed Dominica and 4.22 in third-placed Honduras. The United States was all the way down in 80th spot with 0.15 deaths from extreme weather per 100,000 of its population.

The research found that in relative terms, poorer developing countries are getting hit much harder by these disasters and the results highlight their particular vulnerability to the changing global climate. This is certainly true of Myanmar which was badly hit by Cyclone Nargis in 2008 which killed an estimated 140,000 people and displaced approximately 2.4 million more. Some developed countries have also experienced a profound impact and France had the eleventh highest number of average annual fatalities globally between 1998 and 2017 at 1.82. Floods, storms and especially heatwaves were linked to nearly 20,000 deaths across France over the past 20 years.