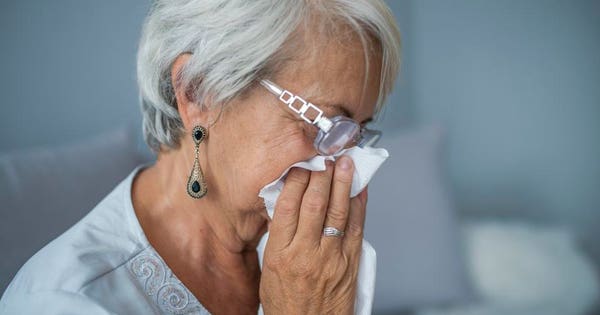 According to new research, the elderly are more susceptible to influenza because their immune systems have trouble recognizing new viral strains.

The findings, published in the journal Cell Host & Microbe, may help researchers design more effective flu vaccines for the elderly.

Ageing has long been associated with increased susceptibility to infection. Influenza, for example, has a disproportionate effect on the elderly. Indeed, the majority of deaths from influenza occur in people over the age of 65.

Moreover, flu vaccines tend to be less effective in this population. A major reason for this is that elderly individuals no longer produce as many antibodies in response to vaccines.

Antibodies, are proteins that can recognize and stick to proteins on an invading pathogen, such as a virus or bacteria, and this is very useful in two immediate ways. Firstly, a pathogen covered in antibodies has a much harder time entering our cells. Secondly, these antibodies act like little security beacons, alerting pathogen-destroying immune cells to the presence of the invader.

Antibodies are produced by immune cells called B cells. Following an infection, or a vaccination, the body produces special B cells – aptly called ‘memory B cells’ – that remember which antibodies were effective, and can respond very quickly should that pathogen ever show up again.

Ultimately, the effectiveness of this line of defense hinges on how well B cells make antibodies. The thing is, the immune system doesn’t really know what diseases it’s going to have to contend with, so it plays a numbers game. There are billions of B cells in the body capable of making a vast number of different antibody proteins. They can do this by incorporating mutations into the antibodies and generating billions of different combinations of these mutations. In theory, at least one of the resulting antibodies will be a match for the next pathogen that comes along.

It’s a vast exercise in statistics and, as a consequence, the immune system can respond to a staggering diversity of pathogens, including strains of flu that haven’t even evolved yet.

But it seems that our ability to play this numbers game declines as we get older.

They found that B cells from younger adults continued to acquire mutations, enabling those cells to make a wide variety of new antibodies. In contrast, B cells from elderly subjects showed a decline in new mutations: the antibodies they made had less variety.

As a result, the antibodies made by the elderly B cells were less potent against newer, more recently evolved strains of the flu virus. Instead, elderly subjects were better at making antibodies against historical strains of influenza that had circulated during their childhoods.

This, of course, is a big problem because influenza viruses are constantly changing.

Elderly adults have a reduced accumulation of antibody mutations and are unable to adapt their antibody responses upon influenza virus vaccination.Henry et al./Cell Host & Microbe

“The major implication is that when a newly circulating influenza virus infects elderly individuals, they don’t have quite the right tool to fight it because their antibodies are not as protective,” says Wilson.

Nevertheless, the researchers say that vaccinations remain the best way to protect the elderly from influenza.

“We are not saying that people shouldn’t be vaccinated or that the current vaccines are useless for elderly individuals,” says Carole Henry of the University of Chicago, who was first author on the study.

Wilson explains that the study’s outcomes could help guide clinical decisions about which existing vaccines to use.

“More recent vaccines developed especially for the elderly population are now on the market and could help induce more protective antibodies,” he says. “The next step will be to evaluate antibody adaptability in elderly individuals immunized with these vaccines.”

In addition, he says, “Our findings could be used by the vaccine community to make better vaccines and improve protection of the elderly population.”