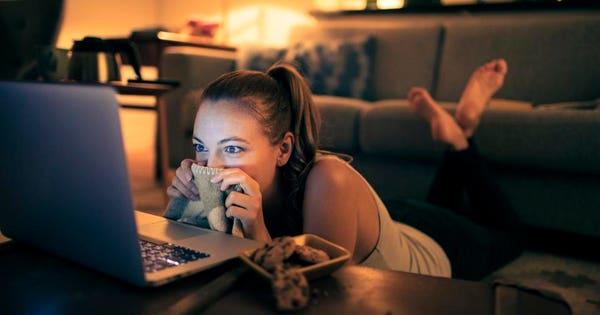 Tis’ the season for scary movies, one after another, as horror movie marathons pave the way to Halloween. For those of us who love horror flicks, that’s pretty close to bliss. For others, it’s a stomach-churning onslaught.

So what is it exactly that makes us seek out the scary – is it just a subjective preference for the macabre, or could biology play a role?

If you’ve read almost anything I’ve written here the past few years, you know what’s coming. Horror-movie hunting does indeed have a biochemical dimension, and paradoxically it’s every bit as positive as the movies are horrific – at least for those of us who dig the experience.  Research has found that willing exposure to that which scares us can provide a counterbalance to life’s stresses. It may also be an effective way to undermine anxiety, and even bolster our resilience.

A handful of theories offer explanations why.  One is what I’ll call the controlled-environment theory, which says that when we watch scary movies, we’re intentionally triggering our fight-or-flight response in an environment where we control the variables. This theory is similar to the thinking behind exposure therapy, sometimes used to treat phobias. The more we experience anxiety triggers in a controlled way, the thinking goes, the more we’re able to deal with our anxiety-responses in the world.

Another possibility is that scary movies foster “good stress.” Even though stress poses plenty of problems in our lives, research has shown that manageable bouts of stress offer some benefits, like generating an immune response that strengthens the immune system against bigger threats. It may be that watching horror flicks is like giving ourselves small stress injections that catalyze resilience. In fact, a small study investigated the effects of watching horror movies on the immune system and found a significant link.

Yet another thought is that it’s not so much the specific content of scary movies that matters, but more the memories associated with watching them. Many of us recall how old we were, where we were, and who we were with when we first saw The Exorcist, or Halloween (or insert you favorite here) – and there’s some comfort in the recollection of how we faced our fear. And since those experiences with iconic horror tend to generate lots of chats with friends over time, they offer social-bonding benefits that also counterbalance anxiety.

In the shorter-term effects category, evidence suggests that watching horror movies elevates mood, at least for those seeking the experience. This theory features prominently in a book entitled, Scream: Chilling Adventures in the Science of Fear,  written by fear researcher Margee Kerr (she calls herself “a sociologist who studies fear”), who also delivered a TED talk on the subject.  The bottom line of this theory—and it appears decently demonstrated in the science—is that watching scary movies temporarily floods the nervous system with a cocktail of neurotransmitters and hormones, from dopamine to adrenaline, yielding mild, mood-boosting euphoria. The effect isn’t unlike what many people seek from riding roller-coasters.

Another part of this response, Kerr says, comes from our sense of accomplishment from enduring the worst scares a movie-maker can throw at us. Like achieving any goal, the good feels arise from knowing we did it.

All of these benefits, however, only appear to materialize if we’re open to the experience. For those who are not, the results could easily go the other way. And for some people that won’t mean just an immediate increase in anxiety, but potentially a residual one as well – and that’s not going to help anyone.

So, if you’re into horror movies, you could be benefiting in more than one way.  If you’re not, no worries, the scare season will soon end and the next round of holidays will be upon us – though some might argue that weeks of ear-wormy holiday music is even scarier.