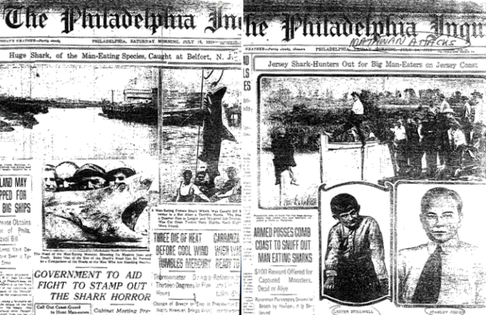 A little over a century ago, four deaths in fourteen days brought to life the theory of a ”rogue shark.” The unusually high number of fatal shark bites occurred in New Jersey, in a chain of events that many say inspired the infamous book Jaws, although the author denies it. Five bites occurred within 12 days in July 1916, leaving four dead and a region shaken and scared of animals they once paid little mind to.

Charles Vansant was the first death, bitten on July 1, the 25-year-old dying of blood loss in Beach Haven. Charles Bruder, 27, was the next death five days later 45 miles to the north, in Spring Lake. On July 12, young Lester Stillwell was bitten while swimming in Matawan Creek, 30 miles north of Spring Lake. Watson Stanley Fisher, 24, was fatally injured, being bitten in the leg in the process of trying to save Lester. Joseph Dunn, 14, was the fifth person bit by a shark. He was swimming three-quarters of a mile downstream in the Matawan Creek when he was bitten in the leg but survived.

That’s two bites happening in oceanic waters and three in a tidal creek. ”So we had this sequence of South to North and you could follow both in time and space what appears to be [the] movement of a single shark,” explained George Burgess, Curator Emeritus of International Shark Attack File (ISAF), who has been studying human-shark interactions for 50 years now. Dr. Frederic Lucas and Dr. John Nichols, two scientists from American Museum of Natural History, were the first to attribute this cluster of shark bite incidents to one individual shark. Calling the individual a “rogue shark,” the theory claims that there are sharks that choose to specifically target humans.

“The theory of a ‘rogue’ shark is unlikely, sometimes a single shark may be responsible for subsequent attacks done in the same area, in a clustered pattern,” Fabio Hazin, a researcher at the Federal Rural University of Pernambuco in Brazil, told LiveScience in an email.

“Considering the millions of people who have been in the water during the last two or three centuries and the fact that we only have two or three cases where we think it might’ve been a single shark involved and only one that we’ve actually been able to prove it suggests that the phenomenon is extremely rare and therefore the logical assumption on any of these cases is that it isn’t [a single shark],” said Burgess.

Since 1916, scientists have debated which shark species and how many were responsible for these bites, with the great white shark (Carcharodon carcharias) and the bull shark (Carcharhinus leucas) being most frequently cited by researchers. The fact that Matawan Creek is a tidal creek is important, as many scientists believed it meant the culprit could only be a bull shark. “It is a large tidal creek with a very prominent saltwater intrusion that occurs especially on high tides and the [bites] that occurred in 1916 were not only on a high tide but a full moon, which meant it was the highest of the high tides. We’re talking about a creek that was big enough to take tugboats and barges in and out of it, so it’s not a little trickle of a creek,” said Burgess. The 1916 bites are listed in The International Shark Attack File as being done by a great white shark. The famous scientist clarified why: “Later on, a shark was captured that was said to have human remains that were identifiable to one of the last victims in the stomach and that shark was a white shark. Hence from my view of the situation looking back at it, it appears it was a single white shark in this series of attacks. But that’s rare.”

“I was fortunate enough to actually be able to document one of those [“rogue shark”] situations completely in Egypt, which is the only documentable one where we can actually prove that it was the case,” he continued. He’s talking about the string of four bites (many fatal) in a few days in 2010 around the holiday resort Sharm El Sheikh. How were they so confident? Photographs of the shark in two of the cases from underwater and above the water allowing scientists to visually identify the shark.

This past year, the United States had the most unprovoked bites in 2017, none of the 53 being fatal. Australia was next, with 14 incidents and one fatality in 2017; Australia averages two fatal incidents per year. Yet in 1933, surgeon Sir Victor Coppleson said in the Medical Journal of Australia that the ”evidence sharks will attack man is complete.” In 1958, he published a book called Shark Attacks, filled with data from 281 shark bites in Australia to make the case for the “rogue shark” theory. However, a great deal of his theory has been disproved or discredited since the book’s publication.

Some brought up the “rogue shark” theory this September when Justine Barwick, 46, and Hannah Papps, 12, were bitten by sharks within 24-hours in the Whitsundays, Australia, and the media coverage of the bites is said to be hurting tourism in the area. This article has tried to be devoid of the word “attack,” since scientists Dr. Christopher Neff and Dr. Robert Hueter published a proposal to properly reclassify human-shark interactions in 2013 asked the media to retire the phrase ‘shark attack’ in favor of a less inflammatory wording.

The ISAF discusses ways to reduce your risk of a shark bite and what to do if one is bitten by a shark on their website. It is important to keep in mind that shark bites, especially fatal ones, are remarkably low (on average, six) given the sheer number of people who go into the water each year.  As more people head to the beaches or rivers to cool off or play, the chances of human-shark interactions go up. However, thanks to advances in medical treatments, response times, public awareness and beach safety, fatalities have decreased worldwide.

So are there sharks who have “gone rogue” with a lust for human blood? No, says Burgess: “It’s not like suddenly a shark is going to get a taste for humans and say, ‘Today I’m going to go after some humans.’ On occasion, we have had single shark involved in multiple bites but usually, there is some other factor getting involved – like deprivation of food situation. It is not unreasonable to assume this.”

McLaren boss says electric vehicle tech doesn’t yet work for supercars
Iceye raises $87 million in Series C investment round
ByteDance says it will own 80% of TikTok Global, contradicts Trump’s claims deal has ‘nothing to do with China’
The US National Academy of Sciences can now kick out harassers. So why hasn’t it?
Space station maneuvers to avoid debris