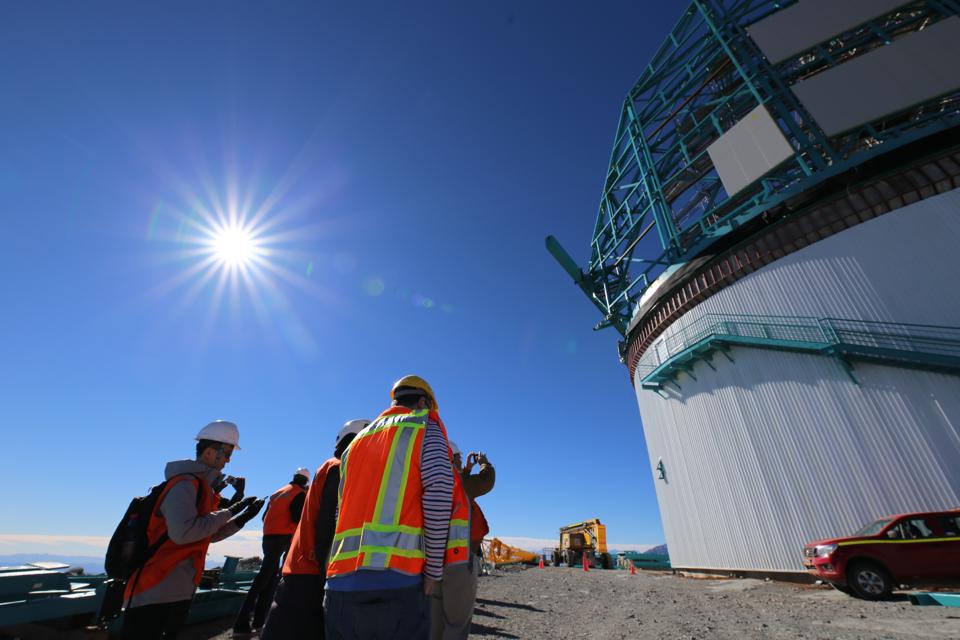 Will Elon Musk’s SpaceX Starlink project end ground-based astronomy as we know it? Despite only 122 of a planned total of 42,000 broadband internet satellites being in orbit so far, astronomers are now gravely concerned about the mega-constellation’s effect on the US$466 million Large Synoptic Survey Telescope (LSST), one of the world’s most new important telescopes currently being built on the Cerro Pachón ridge in Chile’s Elqui Valley.

From 2022, the LSST will survey the entire visible sky in just three nights, effectively producing a motion picture of our Universe. “For anything that changes in the sky, the LSST will be the finderscope,” says Aaron Roodman, an experimental cosmologist at Stanford University involved in instrument construction and preparations for the LSST. “We’re going to find a hundred thousand supernova by the time the project is over.”

Crucially, the LSST will also catalog 90 percent of near-Earth objects larger than 300m and calculate if they are a threat to Earth.

Starlink is a threat to all that, and according to one astronomer involved in the LSST, SpaceX needs to do something about the visibility of its satellites.

Cerro Pachón is the next mountain peak along from the Cerro Tololo Inter-American Observatory (CTIO)’s main site in Chile, which a series of 19 Starlink satellites passed over on Nov. 18, 2019 and ruined observations from its Blanco telescope.

A 6.5 meter-class optical telescope designed to survey the visible sky every week at a far fainter level than presently possible, the LSST will have a 3.2-gigapixel CCD imaging camera, the largest digital camera ever constructed.

If a supernova goes off, or an asteroid is spotted that’s on a dangers trajectory, the LSST will find them, and in real-time alert astronomers and tell them where to point their larger telescopes.

A successor to the Subaru Telescope and Pan-STARRS, the LSST will be the latest and greatest sky survey. It will be uniquely sensitive to changes, something known as time domain astronomy. The LSST will snap 1,000 photographs each night in six wavelengths, from ultraviolet to near infrared, totalling 15 terabytes. Using a custom-made fiberoptic network installed on Cero Pachón, that data will be uploaded in real-time for use by astronomers around the world. “Within a minute of taking an image, any object whose brightness or position has changed compared to previous images, will get flagged,” says Roodman. “In real time the images will be sent via fast fiber to the supercomputer centre at the National Center for Supercomputing Applications (NCSA) at the University of Illinois for primary processing.”

The LSST’s decade-long survey of the night sky is due to begin in 2022 and catalog 40 billion celestial objects by 2032. It will also locate 10,000 primitive objects in the Kuiper Belt and study dark energy and dark matter. In the long term its data ought to allow astronomers to generate a highly detailed map of billions of galaxies, stars and objects in the solar system.

“LSST uniquely scans the sky with a fast and wide cadence going to very faint limits,” says Dr. Tony Tyson, Distinguished Professor at UC Davis, California and Chief Scientist for the LSST. “This means that of all observatories it is most impacted by tens of thousands of bright low earth orbit satellites.”

The fear is that its long exposure images of the night sky will contain streaks of light—Starlink satellites—that block precisely what the LSST is trying to see.

Knowing the exact trajectory of the 42,000 Starlink satellites would help astronomers better aim the LSST away from the streaks, but only some of the time. “There will be so many it is not feasible to dodge them,” says Tyson. “The only hope is for the operators like SpaceX to make them dimmer.”

It’s even more of an issue for asteroid-detection because that takes place best at dusk and dawn which is precisely when satellites catch the glare of the Sun and become easily visible.

So why does it need such a big camera? “We want to get images of every part of the sky as quickly as possible and maximise the field of view—how big each picture is,” says Roodman. The LSST’s field of view will be three and a half degrees across, which is about seven times the diameter of the full moon. “To have such a big field of view you need a big camera and a big focal point,” says Roodman. The camera will contain 189 custom-made 16 megapixel super-flat CCD sensors so advanced that it will be possible to digitize the entire image in only two seconds. “We need to minimize the amount of time that we’re not looking at the heavens,” says Roodman. “It’s also a fast system with an aperture of f1.2 so we can get a picture with a narrow region in focus similar to bokeh.”

Financially supported by the National Science Foundation (NSF) and private funding, the LSST’s construction is being supervised by the Association of Universities for Research in Astronomy (AURA), an international consortium of universities and non-profit institutions that operate world-class astronomy facilities. In Chile, it already administers and operates the telescopes of Cerro Tololo, Gemini South, SOAR, and in the future LSST.

Op-ed | Is the future of space ops officeless?
Optus orders OneSat satellite from Airbus
The Science Of Why Firing Your Gun Up Into The Air Can Be Lethal
It will take personal sustainability to meet the global challenges we face
Brain Eating Amoeba Infection Reported In Florida, Here Is What It Is