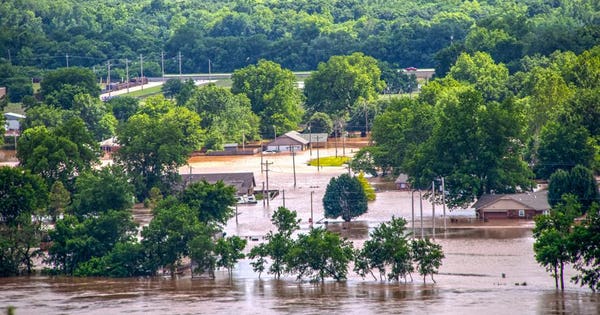 Most of my Forbes essays are meant to be informative pieces on weather, climate, and related sciences. However, there are moments when I use them for editorial commentary. This happens to be one of those moments. While browsing social media this morning, I was reminded of that meteorologists and weather enthusiasts have a habit of referring to aspects of hazardous weather as “impressive” or “nice.” I am writing this from a light-hearted perspective so there is no need for a self-protective reflex. In fact, there is a 100% chance (pun intended) that I am guilty of this too. How many times you have seen statements like:

I have been obsessed with weather since 6th grade and am in complete awe of it at all times. I am not alone in my utter fascination with weather. To many of us, a hook echo or Doppler-indicated rotation couplet evokes words of awe, wonder and inspiration. However, a rural town or major city in the pathway of a storm may have a completely different interpretation of the scenario. Words matters when conveying weather threats to the public.

The 412 Highway to the West of Tulsa Oklahoma as the Arkansas river rises and inundates residential areas.

In thinking about words and weather messaging, it is instructive to review the meaning of connotation and denotation. According to Merriam-Webster Dictionary:

Connotation and denotation are easily confused, and the fact that neither word is particularly common in everyday use makes it difficult for many people to get a firm grip on the difference between them. While each of these two words has several possible meanings, they are notably distinct from each other in all senses. Denotation is concerned with explicit meaning, and connotation tends to be concerned with implicit meaning.

During a severe weather outbreak or landfalling hurricane, a hook echo or small hurricane eye may have a completely different connotation for a meteorologist than a citizen facing a decision to take shelter or evacuate. As a scientist myself, I am always very aware of the denotation and connotation of words. For example, the word “bias” to a scientist simply means an offset from average or normal conditions. A thermometer may always have a 2-degree cold bias. However, the word “bias” may connote devious or negative intentions to the public. The word “positive” means good to most people, but a “positive” trend in atmospheric carbon dioxide or category 5 hurricanes is certainly not a good thing.  Richard Sommerville and Susan Hassol provide a table in Physics Today of other words that may have different meanings for scientists and the public.

From my lens, a word that really creates confusion in meteorological and climate circles is uncertainty. Meteorologists convey information with uncertainty all of the time. A forecast that includes an “80% chance of rain” suggests that an umbrella is in order even though forecast contained some uncertainty. Hurricane messaging employs the “cone of uncertainty” to illustrate potential hurricane track possibilities that a coastal community has to consider. Ensembles are a very important aspect of numerical weather modeling that tries to capture uncertainty in the atmospheric state, initial conditions, or model assumptions. However, my anecdotal observation is that the public often struggles to place “uncertainty” in a proper context. In fact, many people have the connotation that “uncertainty” means meteorologist or climate scientists don’t know. Over the years, I have lost count of the number of mischaracterizations of weather forecasts or climate science because of a person didn’t understand probabilistic forecasts or scenarios, the “cone of uncertainty,” or the perfectly acceptable notion that a snow forecast, for example, might evolve over the course of a few days.

Words matter. My friend and colleague Alan Sealls, Chief Meteorologist at WKRG-TV in Mobile, Alabama, has thought about the importance of words in weather messaging for many years. If you have not stumbled across his blog about “Bad Weather Words,” click this link. It is quite enlightening. Sealls points out that a good weather presenter should avoid misuse, jargon, vagueness, verbosity (redundancy), and cliche’. I have summarized a few examples from his list:

This discussion has been relatively light-fare, but my intent is very serious.  If someone misunderstands “tornado watch vs tornado warning” or thinks a “enhanced risk” of severe weather is more dangerous than a “moderate risk” (oddly its not if you look at the graphic below), then potentially life-altering mistakes could be made.

Stripe leads $20M Series A into Fast, which is building a universal checkout service for e-commerce
Gamma rays and gravitational lensing provide hints of dark matter – Physics World
Wind energy enjoyed a bumper year in 2019, but the coronavirus poses a unique challenge
What mobilizing innovation for COVID-19 can teach us about catalyzing climate tech
Avio, exempt from Italy’s coronavirus lockdown, seeks reopening of French Guiana spaceport