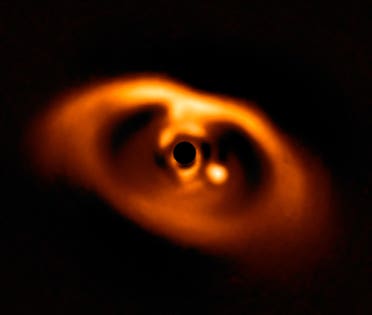 In a historic first, scientists have managed to catch an extremely young exoplanet in the process of formation.

There are a number of theories about how planets form, but the truth is that right now we don’t really know how planetary systems are born. Seeing a planet being spun out of the galactic gas and dust of the Universe is a large part of the puzzle and this is the first time that astronomers have managed it.

The team, led by a group from the Max Planck Institute for Astronomy in Germany, decided to focus their investigation on the young dwarf star PDS 70, which was already suspected of having a young exoplanet in orbit around it.

“These discs around young stars are the birthplaces of planets, but so far only a handful of observations have detected hints of baby planets in them,” explained Miriam Keppler, doctoral student at the MPIA and first author of the publication that highlights the discovery, in a statement. “The problem is that until now, most of these planet candidates could just have been features in the disc.”

Using SPHERE, a planet-hunting instrument on the European Southern Observatory’s Very Large Telescope, the researchers focused in on this primordial disc of gas and dust and found a young planet carving a path through it.

As soon as they spotted the baby planet, the team launched follow-up investigations and were able to get a spectrum analysis of the planet, which shows that the tiny world has a cloudy atmosphere.

They were also able to see that discs with giant “holes” in the centre where the dust and gas are missing are indeed caused by planet formation, a theory long suspected by scientists.

How Swarming Bacteria Actively Use Physics to Avoid Danger
Whiting Petroleum is just the ‘first domino’ to fall in US shale wipeout, strategist says
My lab is closed to me because of the coronavirus. Here’s how I’m planning to stay productive
This adorable tiny record maker lets you cut your own 5-inch vinyl singles
Germline Elongator mutations in Sonic Hedgehog medulloblastoma