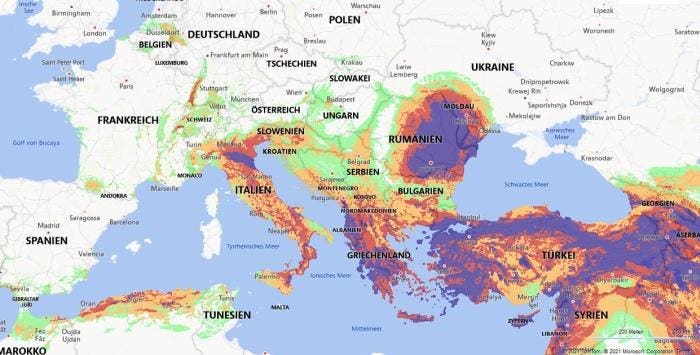 One out of three people in the world is exposed to earthquakes, a number which almost doubled in the past 40 years. On average earthquakes cause nearly US$40 billion in direct economic loss every year, by destroying production sites and disrupting transport lines. Knowing an area’s seismic hazard is now a bigger priority than ever.

This week FM Global, one of the largest commercial property insurers based in the U.S., released the world’s most comprehensive global earthquake risk map to date.

FM Global Worldwide Earthquake Map is an online tool providing a zoomable map with a resolution of one square mile or less around the world. The map employs data and seismic hazard models by the public-private Global Earthquake Model Foundation, China Earthquake Administration and the U.S. Geological Survey.

Unlike standard earthquake maps that show only the expected ground shaking during a seismic event, the new map incorporates soil data and building structural performance to map the probability that the earthquake will damage buildings.

Soil properties play an important role in the outcome of an earthquake. As seismic waves travel through the ground, they move faster through hard rock than soft soil. When waves transition from hard to soft earth, they increase in amplitude (or size), and a bigger wave causes stronger ground shaking. Fine-grained and water-saturated sediment layers in the underground can also lead to soil liquefaction during a quake, in which the ground that is ordinarily a solid behaves like a liquid, causing buildings to sink and topple.

The map also considers the vulnerability of structures, especially buildings, to define risk zones. Seismologists often say that it is not the earthquake that kills people, it is their home. If buildings are designed according to the modern seismic codes, with reinforced structures, the risk is low even if a strong earthquake happens. On the contrary, even a minor magnitude earthquake can cause many victims if structures with weak points, like brick walls in old buildings, collapse.

Every year about 1,000 strong earthquakes, defined as quakes with a magnitude of 5.5 or greater, shake Earth. The great majority of all earthquakes occur at plate boundaries, where Earth’s tectonic plates collide or where segments of Earth’s crust move sideways in relation to each other. Relatively few intraplate earthquakes occur along faults in the normally stable interior of plates. A volcano-tectonic earthquake is an earthquake caused by the movement of magma beneath the surface of the Earth.

Based on the new map, some regions of the world are higher risk zones, including: