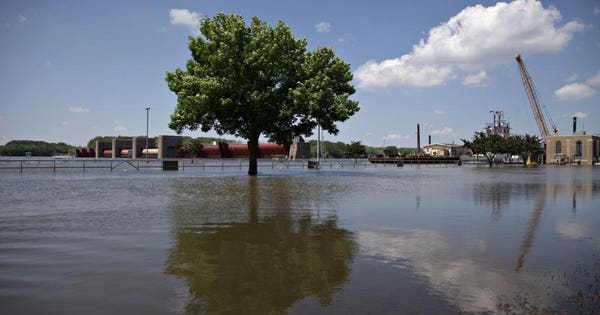 A tree stands in flood waters at Lock 17 on the Mississippi River near New Boston, Illinois, U.S., on Friday, June 7, 2019. Hundreds of barges are stalled on the Mississippi River, clogging the main circulatory system for a farm-belt economy battered by a relentless, record-setting string of snow, rainstorms and flooding. Photographer: Daniel Acker/Bloomberg

There has never been a wetter twelve month period on record in the lower 48 U.S. states than the dozen months ending on June 30, 2019.  June also marks the third consecutive month that the 12-month precipitation record has been broken.

Between July of last year and last month an average of 37.86 inches of moisture fell from the sky across the contiguous states, which is nearly eight inches above the norm, according to the National Oceanic and Atmospheric Administration’s (NOAA) National Centers for Environmental Information.

The evidence of all that record moisture is easy to see across the country, whether it’s in the flood-soaked Missouri and Mississippi River valleys,  the foot of snow that fell in the Northern Rockies in June or the near complete lack of drought conditions anywhere in the lower 48 states.

Just this weekend I found myself trudging through stubbornly persistent snow drifts up to four feet deep in the lower mountains of the Sangre de Cristo range here in New Mexico, and in July.

In addition to continued Midwest flooding, June also saw flash flooding from severe storms in parts of New Jersey, Pennsylvania, Ohio and Illinois. Rains also set records beyond the lower 48: Over four inches of rain fell on Honolulu in a single day, helping give the city its wettest June on record.

While all that precipitation is in the books, what’s not quite on the record yet is what climate change had to do with it, if anything. The science of attributing specific extreme weather events to human influences on climate is still emerging. But researchers have found the fingerprints of climate change on certain events like Hurricane Harvey and the insane amount of water it dumped on Houston.

As for this record-setting stretch of moisture in the U.S., it’s a little too early to say that we’re to blame. However, the world is warming and plenty of models show that a warmer world is also a world in which there’s more water vapor floating around the atmosphere, and that moisture may fall as precipitation in uneven and extreme ways.