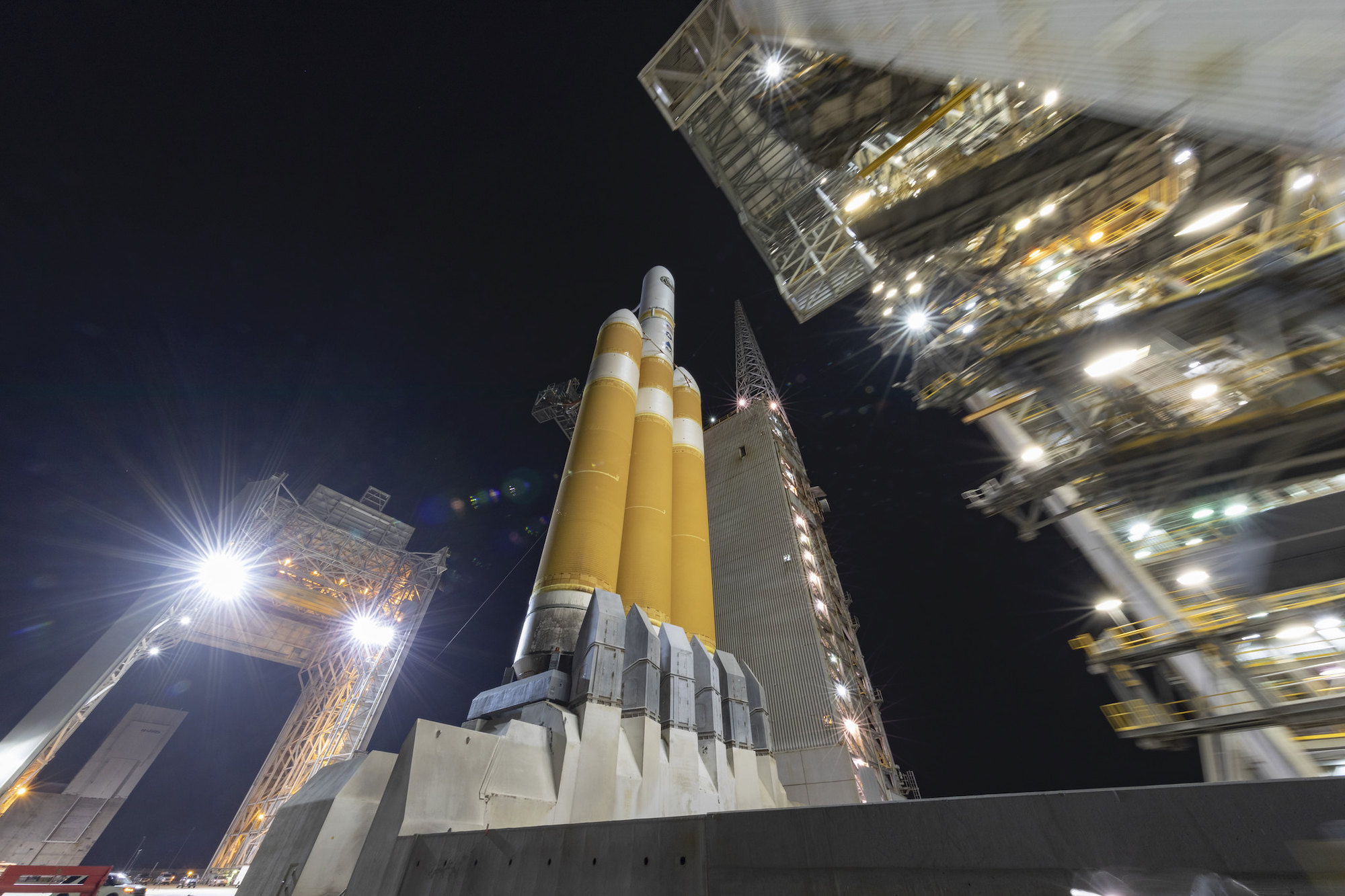 Because Delta 4 Heavy launches take years to plan, the Air Force and the NRO divided the contract into two parts: Launch Vehicle Production Services (LVPS) and Launch Operations Support (LOPS). The $1.18 billion contract awarded Sept. 30 to ULA is for LOPS.

The Air Force had procured Delta 4 Heavy rockets for NROL-44 and NROL-82 in fiscal year 2017 under the Evolved Expendable Launch Vehicle Phase 1 Block Buy contract with ULA that officially ends Sept. 30, 2019. Both missions ran behind schedule and slipped to 2020, which pushed them beyond the Phase 1 contract’s period-of-performance and required the Air Force to award a separate LOPS contract.

Altogether the contracts awarded for rocket production and launch service for the five missions add up to about $2.3 billion.

Col. Robert Bongiovi, director of the Air Force Space and Missile Systems Center Launch Enterprise, told reporters Sept. 30 that these are the “last remnants of sole source contracts.” He said these five missions have “unique and complex launch requirements and are among the most important space assets in the nation.”

By separating the vehicle production and the launch operations contracts, the Air Force said it saved 11 months and hundreds of millions of dollars in costs over the five missions because it allowed ULA to begin procuring hardware and negotiate prices with suppliers in advance. It also gave the Air Force extra time to assess the scope of the work and negotiate a final LOPS contract with ULA. The five-year LOPS contract awarded Sept. 30 starts in fiscal year 2020, and options will be exercised annually.

Bongiovi said the NRO missions were sole-sourced to ULA because the Delta 4 was determined to be the only rocket that could satisfy those demands. NRO satellites require special handling at the launch site and complex integration studies to determine proper payload compatibility. “We are always trying to figure out how to introduce competition,” he said. In response to questions on whether SpaceX’s Falcon Heavy could have competed for these missions, Bongiovi said at the time these launches were acquired in 2016 and 2017, the Delta 4 Heavy was the only one able to meet the requirements.

Bongiovi said the Air Force wants to move away from sole-sourcing and transition to a competitive launch procurement program. Future launches will be competed under the National Security Space Launch Phase 2 Launch Service Procurement. Two providers will be selected in 2020 to split 60/40 all national security missions from 2022 to 2026. To win these contracts, companies have to demonstrate that they can meet the requirements for all national security missions projected for those five years. By the time the Delta 4 Heavy is taken out of service in 2025, the Air Force said both winners of Phase 2 will have to be able to compete for the heavy-lift “Category C” missions.

The only other certified launch provider to challenge ULA in the EELV Phase 1 procurement was SpaceX. The Falcon 9 launch vehicle was certified in May 2015. In Phase 1A of the EELV program SpaceX was awarded five GPS 3 missions, the first of which was launched in December.

The Sept. 30 contract award closes out the EELV program. Under the EELV Phase 1 Block Buy contract with ULA, the Air Force agreed to buy 35 launch vehicle booster cores over a five-year period. The associated infrastructure and support to launch rockets was funded under a separate contract known as EELV Launch Capability, or ELC.

That arrangement gave the Air Force flexibility to reschedule launches on the manifest of the Atlas 5 and the Delta 4 without incurring penalties. DoD at the time wanted to avoid the additional costs associated with the frequent launch delays caused by schedule slips in satellite programs. By paying for a capability to launch separately from launch hardware, DoD sought to ensure access to space regardless of payload delays

The National Defense Authorization Act for Fiscal Year 2016 directed the Air Force to discontinue the ELC contract by December 31, 2019 for Atlas 5 and December 31, 2020 for Delta 4 launch services.

Five missions awarded to ULA under EELV Phase 1 will be launched over the next five years, including the two Delta 4 Heavy launches for NROL-44 and NROL-82 and three Atlas 5 missions (NROL-101, AEHF-6 and AFSPC-7). The Air Force will announce a separate “completion contract” Oct. 1 for launch support operations for the three Atlas 5 missions.

A ULA spokesperson said in a statement that the contract awarded Sept. 30 to fly the five remaining Phase 1 Delta 4 Heavy missions  “includes a well-defined scope to ensure the Air Force and the NRO have the necessary capability to launch the remaining missions on schedule.”