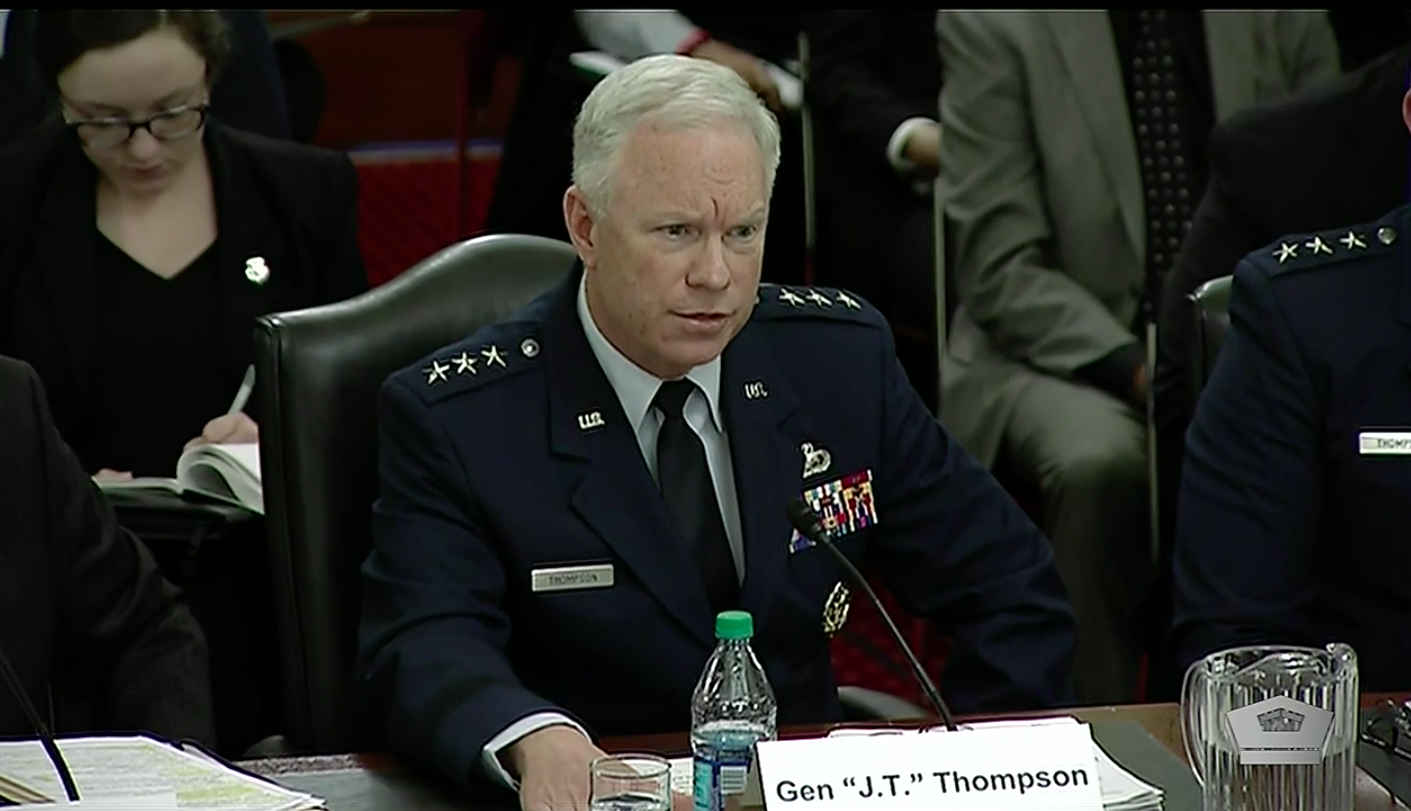 Thompson said the release of the RFP for the Launch Service Procurement will slip into April but will not be pushed out any further as some have recommended.

WASHINGTON — A final solicitation for industry bids for the Launch Service Procurement competition will be released sometime in the next two weeks, said Lt. Gen. John F. Thompson, commander of the Air Force Space And Missile Systems Center.

In testimony on Wednesday to the Senate Armed Services strategic forces subcommittee, Thompson was insistent that the LSP competition must proceed as planned despite concerns voiced by launch providers that the schedule is too aggressive. Thompson also defended the decision to only select two companies to split as many as 25 launches 60/40 over a five-year period.

Subcommittee Chairman Sen. Deb Fischer (R-Neb.) and Ranking Member Sen. Martin Heinrich (D-N.M.) both challenged Thompson to explain the Air Force’s rationale for narrowing the field of competitors — expected to be four companies — down to two by 2020. Likely competitors include national security launch incumbents United Launch Alliance and SpaceX, and new entrants Blue Origin and Northrop Grumman Innovation Systems. Blue Origin has argued that eliminating competitors in 2020 effectively ensures a launch duopoly for years to come and could push companies out of the national security market for good.

The Launch Service Procurement, or LSP, is the first competitive procurement of launch services under the program that used to be called Evolved Expendable Launch Vehicle and was recently renamed National Security Space Launch.

Air Force leaders had planned to issue the final LSP request for proposals (RFP) March 29. Thompson said the release will slip into April but will not be pushed out any further as some have recommended in order to give competitors more time to develop their vehicles. Of the four contenders, all but SpaceX are introducing new vehicles that won’t be ready for their first launch until 2021.

The Air Force is not buying that argument. “We are ready to issue an RFP for the LSP,” Thompson said. “All potential offerors have sufficient maturity,” he added. “We expect a robust competition.”

An award is anticipated in spring 2020. The Air Force will procure launch services from fiscal year 2020 through 2024 for launches starting in 2022.

Thompson said bidders will be able to update their proposals throughout  the evaluation period — which would begin once proposals are received 60 days after the RFP is issued.

Thompson gave another reason why the LSP can’t be delayed. ULA only has 12 RD-180 engines in inventory that can be used for national security launches awarded between now and 2022. Congress five years ago set the 2022 deadline for the Air Force to stop using the Russian-made RD-180 which is the main engine in ULA’s Atlas 5 rocket.

“Five years ago Congress challenged us to get off the RD-180 and provide assured access to space,” said Thompson. “The Air Force rose to that challenge.”

Speaking with reporters after the hearing, Thompson elaborated: “If we delay the RFP and delay the LSP award we’ll get closer and closer to that prohibition and we’ll need to come back here [to Capitol Hill] looking for RD-180s.”

Thompson also pushed back on Blue Origin’s argument that the Air Force should select three providers in order to diversify the industrial base. There is simply not enough work for three companies, he said. The launch manifest between 2020 and 2024 does not support three providers. “None of the offerors’ business cases would close if we open it up to three,” he added. “The longer we maintain the status quo, the more taxpayer dollars are going to a less competitive environment than we anticipate under LSP.”

The Air Force is confident it can support two providers, said Thompson. However, he noted, the Air Force would try to help the LSP losers as much as possible. “As we move forward, after we take a look at the proposals and have details on the technical approaches, after we assess those risks, when we make the award in spring 2020, my guess is that we’ll have an opportunity to discuss with those offerors that didn’t receive awards how we will keep them in the game so they can compete for phase 3, our next LSP.”

Virgin Orbit ready for first orbital launch attempt
The role of nature in the built environment, part three
Commercial crew launch preparations continue despite leadership shakeup
Physics in the pandemic: ‘Our habit of combining theory and experiments was an advantage for the lockdown’ – Physics World
‘Medications should be prescribed by doctors, not the president’: leading Brazilian scientist discusses the pandemic