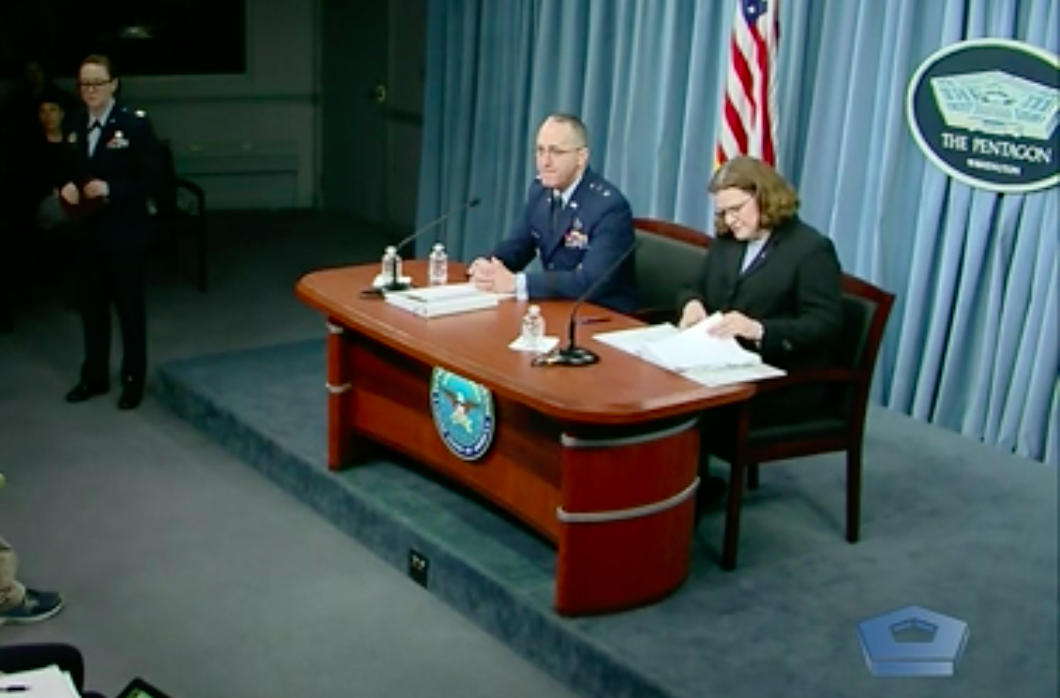 The Air Force is proposing a large funding increase for the missile warning satellites known as the next-generation Overhead Persistent Infrared.

WASHINGTON — The U.S. Air Force is requesting $13.8 billion for space programs in its fiscal year 2020 budget. That is $2 billion, or 17 percent, more than the $11.8 billion that Congress enacted in fiscal year 2019, officials said on Tuesday.

Most of the space portfolio — about $10.3 billion — funds the development and procurement of space technologies like satellites, ground systems and launch services. The remainder covers  personnel, training and operations costs associated with space activities. The majority of the increase requested for fiscal year 2020 is to accelerate the development of next-generation satellites, Air Force budget deputy Carolyn Gleason told reporters at the Pentagon. “We’re growing RDT&E,” she said. That is the account that funds research, development, testing and evaluation of new systems.

The Air Force had to add more money into the OPIR program as it is trying to compress a nine-year schedule into five years. “The next-gen OPIR will rapidly deliver strategically survivable missile warning that counters adversary advances in missile technology and counter-space systems with added resiliency features,” according to budget documents. The budget also funds a new ground system for OPIR known as the Future Operationally Resilient Ground Evolution, or FORGE.

The Air Force is requesting $1.7 billion for the GPS 3 program. It is funding the procurement of the first GPS 3F follow-on variant made by Lockheed Martin, the OCX ground system for GPS 3 made by Raytheon and user terminals made by L-3, Collins Aerospace and Raytheon.

The budget also seeks $1.1 billion for satellite communications. That includes a mix of programs: Protected Tactical Satcom, Evolved Strategic Satcom, the recapitalization of the Enhanced Polar System, and funds for on-orbit testing of Advanced EHF communications satellite AEHF-5 and production oversight of AEHF-6. The primary contractors for satcom programs are Boeing, Northrop Grumman and Lockheed Martin.

There is $1.6 billion in the 2020 budget for space launches under the National Security Space Launch program (formerly known as Evolved Expendable Launch Vehicle). That is a reduction from $2.1 billion for five launches that Congress enacted for fiscal year 2019. The 2020 budget request includes $1.2 billion for four NSSL launches and $400 million of RDT&E funds to be spent on cost-sharing agreements with commercial launch companies that are seeking to certify their vehicles for national security launches.

The larger  funding request for military space comes as the Trump administration continues to make a big push to get congressional authorization to stand up a Space Force.

The president’s $750 billion national defense budget request for fiscal year 2020 includes $14.1 billion for space programs. In addition to the Air Force’s $13.8 billion portfolio are $306 million to establish three new organizations: a U.S. Space Force, a Space Development Agency and U.S. Space Command. It is not clear why the Pentagon’s budget documents released on Tuesday did not detail any space investments by the Army or the Navy. A DoD spokesman did not respond to questions from SpaceNews about what exactly was counted in the $14.1 billion request for space.

The Pentagon justifies increased spending on space as necessary to ensure “unfettered access to and freedom to operate in space,” DoD budget documents state. The Defense Department must “adapt to posture itself for the wars of the future, and DoD must be prepared to assure freedom of operation in space, to deter attacks and, when necessary, to defeat space and counter space threats.”

John Stopher, principal assistant to the Secretary of the Air Force for space, said in a statement to SpaceNews that the administration has “made space an everyday conversation for Americans. The space budgets right now are the strongest they’ve been since 9/11. We are thankful that the President and Congress continue to see space as a priority.”

The budget request includes $72.4 million for 160 billets to establish the Space Force headquarters (120 would transfer from other services and 40 would be new hires). The budget also proposes $83.8 million to stand up U.S. Space Command and $149.8 million to establish a Space Development Agency.

The Space Development Agency will be dedicated to “rapidly developing, acquiring and fielding next-generation space technologies,” the budget documents say. The SDA will be placed in the office of Undersecretary of Defense for Research and Engineering Mike Griffin but will transition into the Space Force if and when the new branch is established.

Judge halts Trump administration order banning WeChat from Apple and Google app stores
Trump agrees to deal in which TikTok will partner with Oracle and Walmart
Virgin Orbit Seeking Over $100 Million As ‘Jaw Dropping’ Costs Mount And Small Satellite Market Narrows
Silicon Valley IPOs are being celebrated in parking lots and conference rooms, as CEOs navigate pandemic and wildfire smoke
These are the 4 most promising worlds for alien life in our Solar System