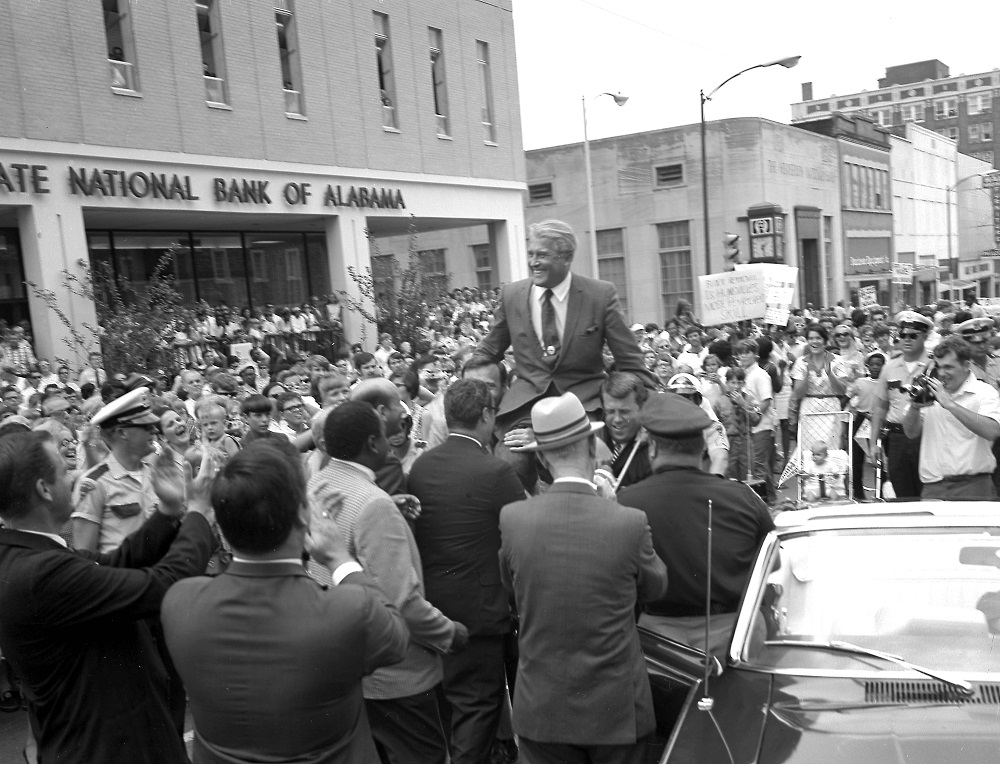 This article originally appeared in the July 29, 2019 issue of SpaceNews magazine.

Tim Pickens has vivid memories of Project Apollo. Growing up in Huntsville, Alabama, where his father worked at Redstone Arsenal, Pickens recalls his father explaining why their home windows were vibrating. Saturn V was undergoing testing nearby.

“My passion to get us back to the moon and beyond has driven me really hard for the last 25 years,” said the founder and chief executive of Pickens Innovations, a Huntsville aerospace hardware, engineering, research and development company.

Pickens designed the propulsion system for Burt Rutan’s SpaceShipOne, founded Orion Propulsion, a Huntsville company he sold in 2009 to Dynetics, a science and information technology company also based in Huntsville. Pickens is also a veteran of two Google Lunar X Prize teams: the Rocket City Space Pioneers and Moon Express.

“Making space affordable has been the driving force as long as I can remember,” Pickens said by email.

The Apollo program and 1969 moon landing inspired many of the entrepreneurs working to send people and robotic vehicles back to the moon or to pave the way for further space exploration and commerce. Some of them clearly remember the grainy black and white images broadcast around the world. Others were stirred by the pictures they saw and stories they heard years later.

Grant Anderson, president, chief executive and co-founder of Paragon Space Development Corp., a Tucson, Arizona, company that specializes in life support and thermal control systems, was influenced by Apollo 11 and the 1970 debut of the Boeing 747 commercial jet.

Anderson recalls watching the moon landing and Neil Armstrong’s first steps on the lunar surface on a black and white television in his Iowa living room with his mother and siblings when he was six years old. At the time, Anderson’s father was working in Saigon. He was a foreign service officer on U.S. Army Gen. William Westmoreland’s staff.

“Really what Apollo and the space program as a whole did is open my eyes to what can be done when a group sets their sights on an ‘impossible’ goal and works toward it,” Anderson said by email. “The demolition of the assets (Saturn V especially) also showed me what could be done in the wrong way.”

Paragon specializes in life support and thermal control technology. In June, Paragon and Giner Inc., an electrochemical research and development company based in Newton, Massachusetts, announced a NASA contract to develop and test technology to purify deposits of water on the moon and to generate oxygen and hydrogen in-situ.

John Thornton, chief executive of Astrobotic Technology, a lunar logistics company based in Pittsburgh, wasn’t yet born when the lunar module first touched down in the Sea of Tranquility. Still, he sees Apollo as an important precedent for Astrobotic’s effort to create a lunar delivery service. “A lot of the Apollo technologies are the same ones that will get us to the moon again 50 years after Apollo,” Thornton said.

Astrobotic spun out of Carnegie Mellon University in 2007 to compete for the Google Lunar X Prize, a competition promising a $20 million grand prize to the first commercial team to send a vehicle to the moon capable of traveling 500 meters and sending back pictures and video. Although the competition ended in 2018 without a winner, Astrobotic remains committed to its moonshot.

NASA announced awards in May to Astrobotic, Intuitive Machines and OrbitBeyond to carry as many as 23 payloads to the surface of the moon on three commercial missions scheduled for launch between September 2020 and July 2021.

Following Apollo’s example, Astrobotic is preparing to deploy multiple payloads on each lunar lander. Left on the lunar surface, some of the Apollo instruments continued to operate for months or years.

Astrobotic won a $79.5 million NASA contract in May to send 14 payloads to the moon in its Peregrine lunar lander in July 2021. Astrobotic has orders to carry 15 additional payloads on the spacecraft for various government and commercial customers.

Born in Germany in 1968, Audacy CEO Ralph Ewig is too young to recall live Apollo 11 coverage. Still, one of his earliest memories is seeing astronauts on the lunar surface.

“It had a lasting impact on me in making the connection between math, sciences and human exploration,” Ewig said by email. “The accomplishments of Apollo motivated me to pursue a university degree in physics with the ultimate goal of applying to the NASA astronaut program.”

After moving to the United States in 1992, Ewig obtained a Ph.D. in aeronautics and astronautics at the University of Washington. He applied to the astronaut corps in 2007.

“I was not selected in the end, but the desire to explore and push humanity’s boundaries stayed with me,” Ewig said. “It still drives me today to contribute my abilities in any way I can towards the goal of expanding the human presence in space.”

Planet co-founder Will Marshall, also born after the Apollo program, said the San Francisco-based company’s founders were influenced by one of Apollo’s iconic images.

“The Blue Marble shot from Apollo 17 hugely inspired us,” Marshall said by email. “It made us think specifically about the fragility of the Earth and the need to take care of it. Planet is a continuation of that vector, from awareness towards action.”

Planet captures daily images of Earth with a fleet of satellites in low Earth orbit. The firm’s motto is “See Change, Change the World.”

A passion for space technology runs in Tim Pickens’s family. Herman Leon Pickens, Tim’s father, was an engineer and inventor who designed and analyzed circuits for NASA’s Saturn 5 rocket ground support equipment while working for Sperry Rand Corp.’s Space Support Division in Huntsville, Alabama, from 1965 to 1972. Herman Pickens was still working on space technology when he died in 2016 at the age of 83.

“To this day when they light rocket engines, they are using a device that he designed and built from his home shop to provide the spark to light the engines,” Tim Pickens said by email. NASA Marshall Space Flight Center relied on Herman Pickens’ exciter in 2016 when testing an advanced upper stage engine fueled by liquid oxygen and liquid hydrogen to provide 35,000 pounds of thrust.

The engine was tested over 10 times, including in heavy rain and the exciter worked every time, Jason Turpin, NASA Marshall Liquid Engine Systems Branch chief, said in a May 2016 letter to the Pickens family. “Although we suffered issues with instrumentation and valve control, Herman’s exciter worked perfectly and provided reliable ignition,” Turpin wrote.

Earlier this year, Tim Pickens learned of another large rocket engine tested with help from his father’s exciter. “Even after his passing, he is still alive through the technology that exist at Marshall Space Flight Center,” Tim Pickens said.

Herman Pickens was a U.S. Navy electrician before a lengthy career that included jobs with Philco, McDonnell Aircraft Corp. and RCA Corp.

“In later years he would go to work for me and be my most brilliant engineer,” Tim Pickens said.