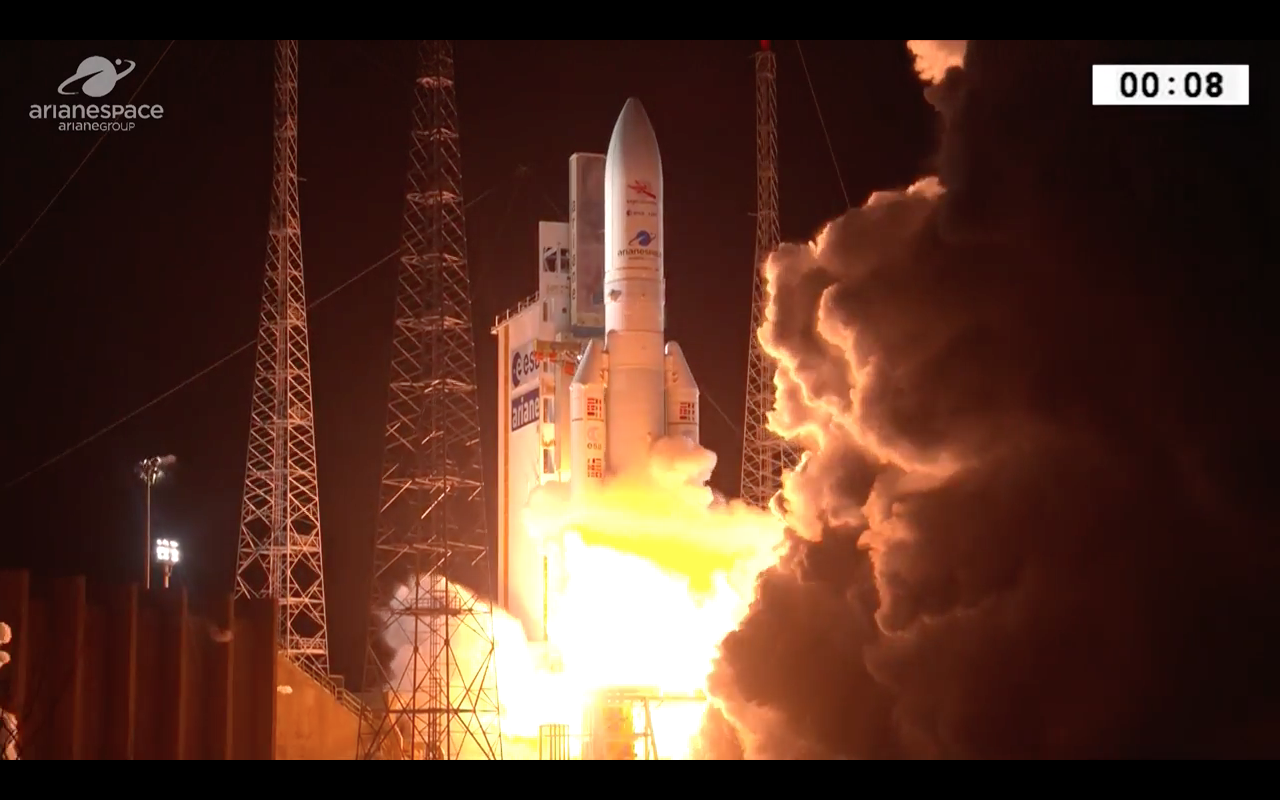 WASHINGTON — A Mercury-bound science mission from the European and Japanese space agencies began a seven-year journey to the Solar System’s smallest planet Oct. 19 aboard and Ariane 5 rocket.

The BepiColombo mission took off from the European Spaceport in Kourou, French Guiana at 9:45 p.m. Eastern, marking the beginning of a 9-billion kilometer trip to the closest planet to the Sun.

The spacecraft now begins a journey that includes nine planetary flybys for gravitational assists — one of Earth, two of Venus and six by Mercury — in order to safely arrive in orbit around the planet.

A direct trajectory to Mercury would give BepiColombo too much speed to not succumb to the sun’s gravity.

BepiColombo is JAXA’s first joint mission with ESA, and both space agencies’ first mission to Mercury. The science mission builds on research from Mercury’s only two science missions: NASA’s Mariner 10, which performed three fly-bys in 1974 and 1975, and NASA’s Messenger, which orbited from 2011 to 2015 before crashing into the rocky planet’s surface.

ESA member states almost cancelled BepiColombo after the mission, which began in 2000, grew too large to fit in a Soyuz rocket, requiring a more expensive Ariane 5 to continue. In 2009 ESA approved the redesigned mission, featuring systems optimized for the extreme temperatures near Mercury, despite the increased cost.

Airbus Defence and Space is the prime contractor for ESA’s part of BepiColombo, having led a team of 83 companies from 16 countries in building the Mercury Planetary Orbiter, the carrier module and sunshield. Japan-based NEC Corp.  led an industrial team in building JAXA’s spacecraft.

Temperatures around Mercury range from 450 to -180 degrees Celsius (around 850 to -300 degrees Fahrenheit). Johannes Benkhoff, BepiColombo mission scientist at ESA, said 80 percent of the materials for BepiColombo needed to be specially qualified to ensure they could survive the mission.

BepiColombo is named after the late professor Giuseppe “Bepi” Colombo, from the University of Padua, Italy, who studied Mercury and suggested NASA fly its Mariner 10 orbiter by Venus for a gravity-assist, enabling the spacecraft to fly by Mercury three times.

BepiColombo is scheduled to arrive at Mercury in December 2025 and begin its science mission in 2026. Benkhoff said a decision will have to be made whether to fund the mission for an additional year. Though current plans call for a single year of research, the spacecraft are designed to operate in a research mode for two years, he said.