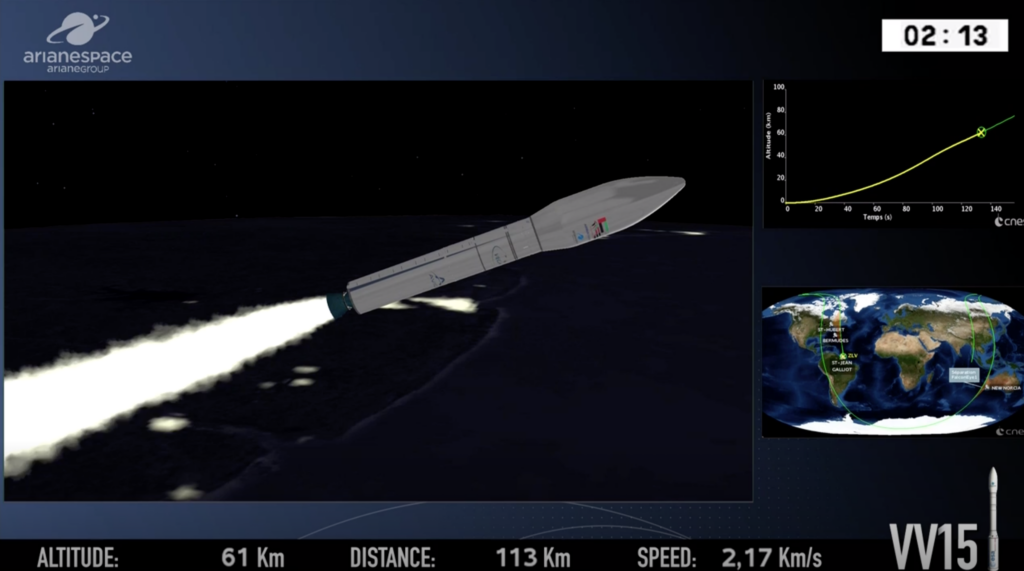 WASHINGTON — The fifteenth launch of a European Vega rocket ended in failure July 10, resulting in the loss of an imaging satellite for the United Arab Emirates.

The Vega rocket, built by Italian manufacturer Avio, lifted off at 9:53 p.m. Eastern from Europe’s spaceport in Kourou, French Guiana on the northern coast of South America.

“About 2 minutes after liftoff, around the [Zefiro]-23 ignition, a major anomaly occurred, resulting in the loss of the mission,” Luce Fabreguettes, Arianespace’s executive vice president of missions, operations and purchasing, said during the launch webcast. “On behalf of Arianespace, I wish to express my deepest apologies to our customers for the loss of their payload.”

The failure is the first for Vega, a light-lift vehicle designed to launch around 1,500 kilograms to low Earth orbit. The four-stage launcher has been in service in 2012, and is Arianespace’s newest rocket.

Falcon Eye 1 was a 1,200-kilogram, dual-purpose satellite designed to provide imagery for the commercial market as well as the UAE Armed Forces. Built by Airbus Defence and Space with an imaging payload from Thales Alenia Space, the satellite draws on technology from France’s high-resolution Pleiades imaging constellation.

From its targeted 611-kilometer orbit, Falcon Eye 1 was intended to image the Earth in high resolution as it orbited 15 times a day.

A second satellite, Falcon Eye 2, was scheduled to launch on another Vega rocket late this year, though that timeline is now likely to change.

Reliable COTS Components for AOCS – Gyro and IMU Modules
Stocks Will Take A Hit From Second Wave Of Coronavirus, Wall Street Firm Warns Clients
Ask Ethan: Will The Universe Ever Run Out Of Energy?
Trump to block downloads of TikTok, WeChat on Sunday
The US National Academy of Sciences can now kick out harassers. So why hasn’t it?