The more we study the Universe, the more it seems likely that each galaxy is orbiting a cosmic colossus – a supermassive black hole, powering the galactic nucleus.

There’s a lot we don’t know about these giant objects – including the glaring question of how they grow so huge – but new research could help us fill in some of the gaps. According to a new radio survey of all the galaxies in a region of the sky, every supermassive black hole in a galactic nucleus devours matter, although they go about it a little differently.

“We are getting more and more indications that all galaxies have enormously massive black holes in their centers. Of course, these must have grown to their current mass,” said astronomer Peter Barthel of the University of Groningen in the Netherlands.

“It seems that, thanks to our observations, we now have these growth processes in view and are slowly but surely starting to understand them.”

There is a funny gap in the mass range of black holes that mean we’re missing an important piece of the puzzle of how supermassive black holes form and grow. Stellar mass black holes – ones that have formed from the collapsed core of a massive star – have only been detected up to 142 times the mass of the Sun, and even that one was weightier than usual, the product of a collision between two smaller black holes.

One way we can try to figure it out is by studying the black holes we have detected, to see if their behavior can give us any clues; that is what a team of astronomers led by Jack Radcliffe of the University of Pretoria in South Africa did.

Their focus was a region of space known as GOODS-North, located in the constellation of Ursa Major. This region, the subject of a Hubble deep sky survey, has been well studied, but primarily in optical, ultraviolet, and infrared wavelengths. 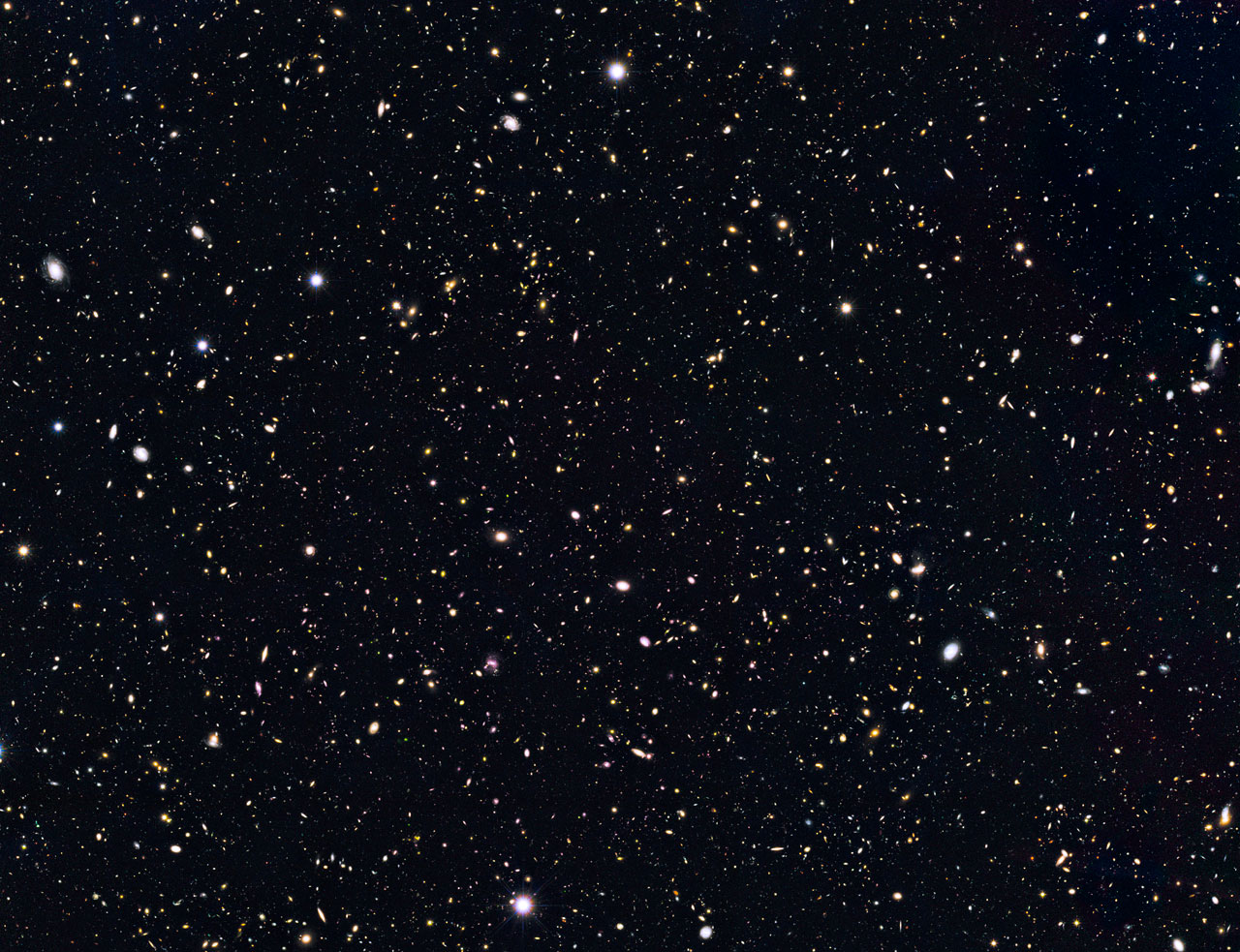 A section of GOODS North, with each dot a galaxy. (NASA/ESA/G. Illingworth/P. Oesch/R. Bouwens and I. Labbé, and the Science Team)

Radcliffe and his team performed analyses of the region using a range of wavelengths up to X-ray, adding radio observations using very long baseline interferometry to the mix. Thus, they identified active galactic nuclei – those containing an active supermassive black hole – that were bright in different wavelengths.

When supermassive black holes are actively accreting material – slurping down gas and dust from their surrounding space – the material heats up, glowing with bright enough electromagnetic radiation to be seen across vast cosmic distances.

Depending on how much dust is obscuring the galactic nucleus, some wavelengths of this light may be stronger, so no single wavelength range can be used to identify all active galactic nuclei in a patch of sky.

Equipped with this additional information, the team made a study of the AGN in GOODS-North, and made several observations.

Next, they investigated the presence of starburst activity – that is, a region and period of intense star formation – coinciding with an active galactic nucleus.

It’s thought that feedback from an active galactic nucleus can quench star formation by blowing away all the material stars are made of, but some studies have shown that the opposite can happen, too – that material shocked and compressed by feedback can collapse into baby stars.

They found that some galaxies have starburst activity, and some don’t. Interestingly, ongoing starburst activity can make an active galactic nucleus harder to see, suggesting that more investigation will need to be done to better define the role of feedback in quenching.

Finally, they studied the relativistic jets that can shoot from the poles of a supermassive black hole during active accretion. It’s thought that these jets consist of a small fraction of material that gets funneled along magnetic field lines from the inner region of the accretion disk to the black hole’s poles where it is blasted into space in the form of jets of ionized plasma, at speeds a significant percentage of the speed of light.

We’re not entirely sure how and why these jets form, and the team’s research suggests that the accretion rate of material doesn’t play a huge role. They found that jets form only sometimes, and that whether a black hole is eating fast or slowly matters not.

This information, the researchers said, can help to better understand the accretion behavior and growth of supermassive black holes. And, they said, it also shows that radio astronomy can play a more significant role in these studies going forward.

Which means, in the future, we will have a more powerful toolset for trying to unravel one of the most perplexing black hole mysteries – where the heck do supermassive chonkers even come from?

The team’s research has been published and accepted in two papers in Astronomy & Astrophysics. They can be found here and here.

OneWeb adds 36 satellites to broadband constellation as deployment accelerates
April’s full moon is 2021’s first supermoon! Here’s when to look for it
Dim stars that have failed at fusion are masters of spin
Sell yourself and your science in a compelling personal statement
Are Rare Cases Of Myocarditis Linked To Pfizer, Moderna Covid-19 Vaccines?