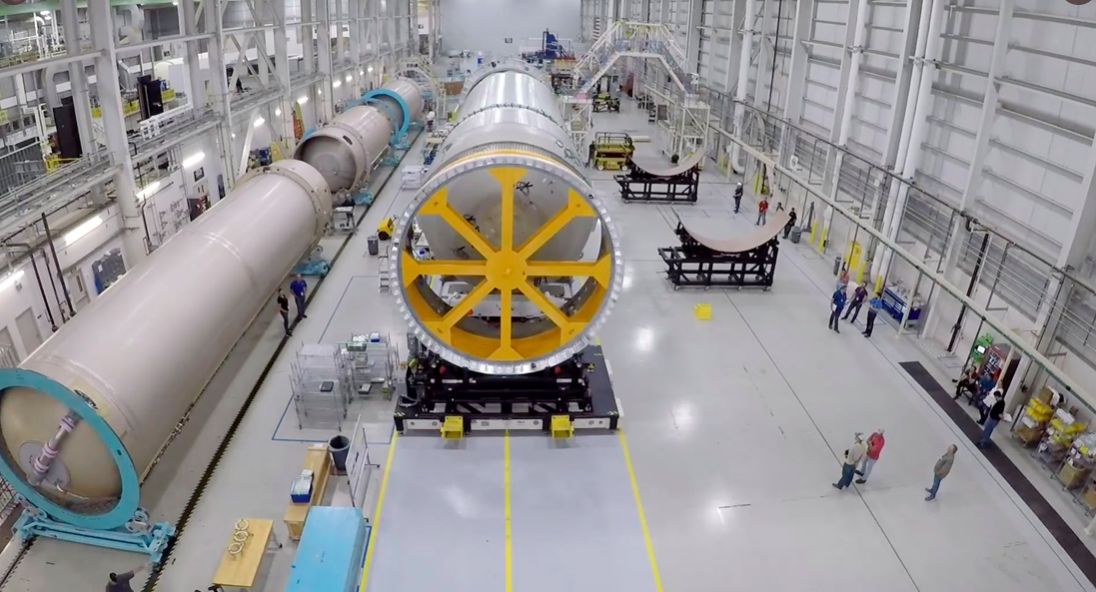 DECATUR, Ala. — A booster prototype representative of the first stage of the Vulcan Centaur rocket will roll out of a United Launch Alliance sprawling factory in early September and make the short trip across the parking lot to a test facility run by ULA’s subcontractor Dynetics.

The structural test booster will be attached to electronic actuators that will simulate loads in excess of those expected in flight. The results of the tests — expected to continue into next year — will be used to validate the integrity of the design and will mark a key step as ULA prepares to build the booster that will power Vulcan in its first flight projected for 2021.

Vulcan is a new class of space launch vehicles ULA is building at the factory that Boeing opened in 1998 to make Delta rockets. After ULA was formed in 2006 as a joint Boeing-Lockheed Martin venture, the Atlas line moved to Decatur. Over the next several years, the production of both legacy vehicles will be scaled back and more resources will be shifted to Vulcan.

A SpaceNews reporter recently toured the 1.6 million square feet facility, where about 850 employees and contractors cut, weld and assemble propellant tanks, main and upper stage boosters. About 28 lower and upper stages today are in various phases of production for seven Atlas 5 missions and one Delta 4 Heavy.

In parallel, robotic assembly lines and manufacturing tool upgrades are being introduced at the factory in preparation for the transition to Vulcan production. ULA is financing these improvements with funds awarded in October 2018 by the Air Force under the Launch Service Agreement contract.

Five major Vulcan components are now in different stages of assembly and will be completed over the next 12 months, Mark Peller, ULA vice president of major development, said in an interview.

“We just finished the booster structural test article, we have two Centaur upper stage test articles, plus a booster and upper stage for first flight,” Peller said. “Early next year we’ll start building the second article and we’ll be transitioning the Decatur factory to recurring production of the Vulcan rocket.”

Before the first flight upper stage begins production, ULA will build two upper stage test articles. One will be tested for structural integrity. The other will be a fluids test article to verify the propulsion systems. Both upper stage tests will be performed at NASA’s Marshall Space Flight Center in nearby Huntsville in the first half of 2020.

As pieces of new Vulcan hardware come together in Decatur, the plan is for most components to fly on an Atlas or a Delta rocket some time before Vulcan’s debut in 2021. The exception is the main engine. Blue Origin’s BE-4 will be tested on the ground before Vulcan’s first launch. The BE-4 has been in development since 2011 and is the first rocket engine to run on liquid oxygen and liquid methane.

The BE-4 will not fly until Vulcan flies but ULA does not consider that a risk to the program, said Peller. “It’s a new development and it’s required a great deal of focus. That’s why it was the first thing that was ever started on the Vulcan program.” Blue Origin continues to test the engine extensively at its facility in West Texas, Peller noted. Once development is completed, Blue Origin will build two qualification engines for further testing before it delivers two flight engines to ULA to be integrated with the booster at the Decatur factory.

“Before the first flight there’ll be more testing of the whole rocket,” Peller said. The final step in the run-up to first launch will be an on-pad flight readiness firing with both engines — the so-called green run.

ULA has delivered more than 130 satellites to orbit, and its future now depends on Vulcan Centaur winning one of two slots in the National Security Space Launch Phase 2 Launch Service Procurement competition. ULA will be offering Vulcan as a single vehicle to perform all missions currently done by Atlas and Delta, in addition to more complex flights requested by the Air Force for the Phase 2 competition. With Vulcan, ULA has a low margin for error as rivals SpaceX, Blue Origin and Northrop Grumman move to challenge ULA’s dominance of the national security space launch market.

When it designed Vulcan, ULA’s primary goal was to develop a vehicle with a domestically produced engine to replace the Atlas 5 as the Air Force will not be able to fly satellites on the Russian engine-powered Atlas beyond 2022. The company also sought to reduce the risk of a new design by incorporating Atlas and Delta components.

ULA CEO Tory Bruno has been insistent that the vehicle was “purpose built” for national security missions. But the company also is positioning Vulcan to compete for NASA and commercial work.

Vulcan’s inaugural mission in 2021 will be to fly an Astrobotic lunar lander to the moon, the company announced Aug. 19. Astrobotic a year ago selected Dynetics to provide the main propulsion system for its Peregrine lunar lander. Astrobotic was picked by NASA to deliver up to 14 payloads to the lunar surface. The launch of the lunar lander will serve as the first of two certification flights required for the U.S. Air Force certification process. The second flight will be a Sierra Nevada Dream Chaser cargo spacecraft mission to the International Space Station in late 2021.

ULA has not yet released its projected pricing for Vulcan. While Atlas and Delta command much higher prices than any other vehicle today, ULA believes Vulcan will be more competitive. “It will cost significantly less than Atlas while offering the same reliability,” Peller said. ULA will be able to charge less by virtue of consolidating the expenses of two lines of vehicles under a single program, he said. “This rocket can do what the full family of Atlas and Delta rockets can do.”

As a single core vehicle, Vulcan’s heavy configuration will not require strapping three boosters together like Delta. “The only change we make to tailor the performance for a particular mission is how many solid rocket motors we attach,” Peller said. The vehicle can handle up to six Northrop Grumman-built solid boosters. “That is really the breakthrough,” he said. “Being able to get heavy lift performance out of a single core vehicle and adjusting the number of solids to meet the full range of missions.”

The other change made for heavy missions is the length of the 5.4 meter diameter fairing. One version is 51 feet in length and the longer is 70 feet. Switzerland-headquartered RUAG USA is producing the 5.4 meter out of autoclave composite fairing in a facility adjacent to ULA’s. The company moved all production of composite structures it builds for Atlas and Vulcan to Decatur.

“They are nearing completion of the first 5.4 meter fairing for Atlas,” Peller said. RUAG is expected to deliver the first fairing in early 2020. “They built prototypes of various Vulcan composite structures and are now moving forward to build Vulcan flight hardware.”