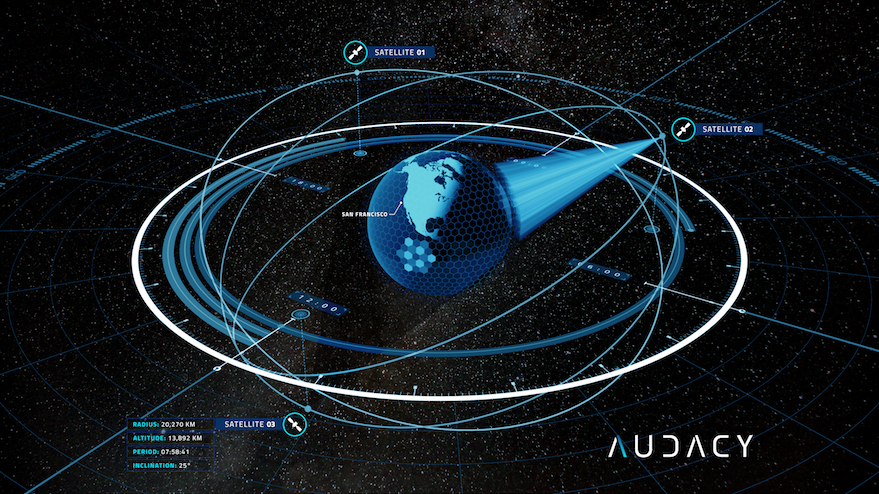 Prior to the firm’s demise, customers signed memoranda of understanding to spend more than $100 million annually on Audacy’s network and the firm obtained a Federal Communications Commission license to provide fixed and inter-satellite communications services from a constellation of medium Earth orbit satellites.

Audacy’s name was a nod to the ambitious nature of the undertaking. After learning of the plan to create a commercial version of NASA’s Tracking and Data Relay network, someone called the effort “audacious.”

Audacy began laying off employees in January 2019, soon after the firm failed to make contact with a technology demonstration satellite launched in December 2018 on a SpaceX Falcon 9 rocket rideshare mission. In May, two of Audacy’s three cofounders left and the firm closed its offices in Mountain View, California, and Singapore.

Audacy CEO Ralph Ewig continued seeking investment until August when the firm defaulted on its debt.

Former Audacy executives and investors declined to discuss the firm’s demise but Ewig talked about the hurdles Audacy faced at a NASA iTech Forum panel discussion in Mountain View in July 2019.

Entrepreneurs are taught to pay close attention to product-market fit, making sure customers want the products they plan to produce. In retrospect, Ewig said startups should understand the importance of finding appropriate investors.

“Not every investor is going to be a suitable investor for you based on the product, your company, and the parameters around that,” Ewig said at the NASA iTech Forum. “Work at product-market fit as an investment opportunity to a very specific target audience just as hard as you would work on product-market fit for your customers. That was a huge lesson that took us a long time to pick up on.”