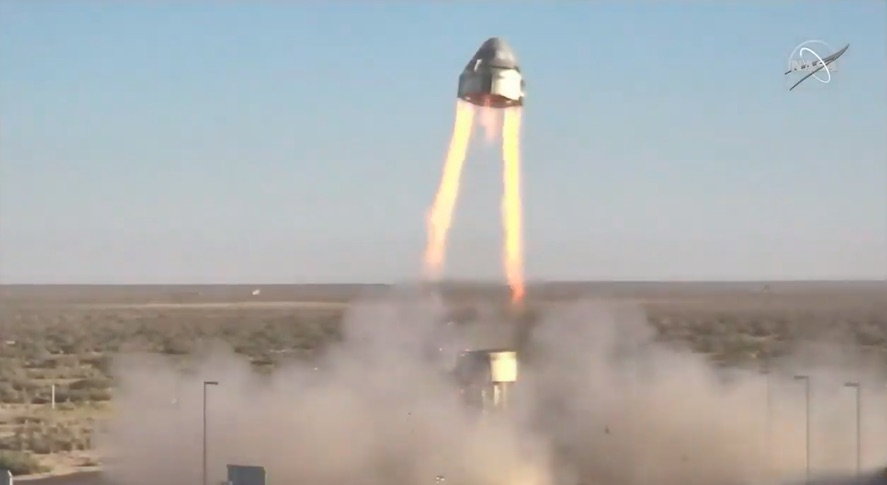 WASHINGTON — NASA and Boeing said a pad abort test of the CST-100 Starliner commercial crew vehicle Nov. 4 was a success despite the failure of one of the capsule’s three parachutes.

The Starliner lifted off from a test stand at Launch Complex 32 at White Sands Missile Range in New Mexico at approximately 9:15 a.m. Eastern time. The spacecraft’s launch abort engines fired for five seconds, and a separate set of orbital maneuvering thrusters for 10 seconds, accelerating the spacecraft to more than 1,000 kilometers per hour to simulate escaping a malfunctioning rocket on the launch pad.

The capsule soared to a planned peak altitude of about 1,350 meters before jettisoning its service module and heat shield, then deploying its parachutes. The capsule, cushioned by airbags, landed about 90 seconds after liftoff.

“The initial indication here is that we’ve had a successful test,” Boeing spokesperson Jessica Landa said during a NASA TV broadcast of the test.

“We are thrilled with the preliminary results, and now we have the job of really digging into the data and analyzing whether everything worked as we expected,” Kathy Lueders, manager of NASA’s commercial crew program, said in a statement about the test.

However, NASA and Boeing acknowledged one glitch with the test: only two of the three main parachutes deployed as the capsule descended. The third parachute may have been torn off, or not deployed at all, based on shaky video of the test.

NASA and Boeing said Starliner is designed to land safely if one main chute malfunctions. “We saw two out of three parachutes, and that is a stable condition,” NASA spokesperson Dan Huot said during the broadcast. The agency confirmed in a later statement that “two [parachutes] opening successfully is acceptable for the test parameters and crew safety.”

The pad abort test was a major milestone in development of Starliner. The next is an uncrewed orbital flight, called the Orbital Flight Test, where a Starliner will launch on an Atlas 5 to the International Space Station. That launch is scheduled for Dec. 17, although an investigation into the failed parachute could delay that mission.

A crewed flight test, carrying NASA astronauts Mike Fincke and Nicole Mann and Boeing astronaut Chris Ferguson, will follow some time in 2020. The three attended the pad abort test and were satisfied with what they saw. “It worked pretty much the way I had always envisioned,” Ferguson said shortly after the test.

“We hope we never need to use this system, but in case we ever have any trouble aboard the beautiful Atlas 5 on the launch pad, we know after today’s test that we’ll be able to get off safely,” said Fincke.

SpaceX, which conducted a pad abort test of its Crew Dragon spacecraft in May 2015, is preparing for an in-flight abort test in December. On that test, a Crew Dragon spacecraft will fire its SuperDraco thrusters to escape a Falcon 9 nearly 90 seconds after liftoff from the Kennedy Space Center, around the time of maximum dynamic pressure on the spacecraft. SpaceX is scheduled to perform a static fire of those thrusters as soon as Nov. 6 in preparation for that flight.

Boeing will not perform its own in-flight abort test, concluding that data from the pad abort, along with modeling of flight conditions, will be sufficient, an approach NASA approved.