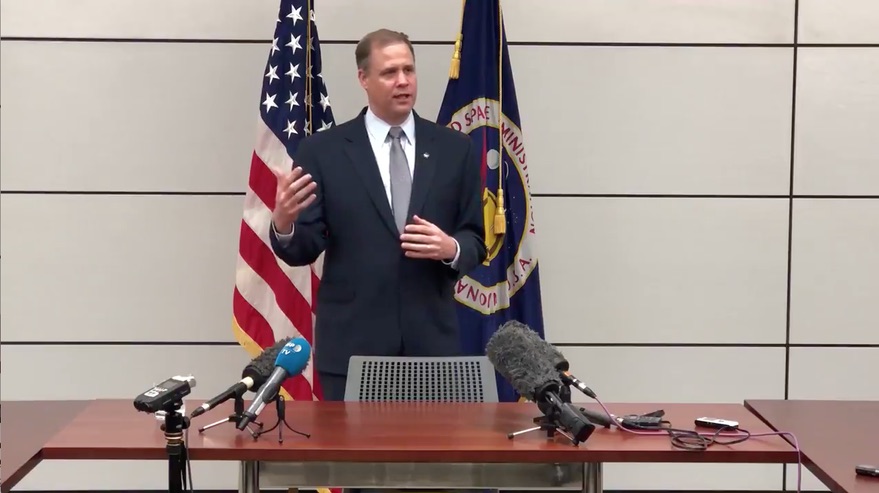 In a series of clips from an Oct. 12 press conference in Moscow, posted to the administrator’s Twitter account Oct. 14, Bridenstine said he expected American astronauts to be flying again on Soyuz spacecraft soon.

“We have a really good idea what happened” during the Oct. 10 launch of the Soyuz MS-10 spacecraft, which had to use its launch abort system to escape its Soyuz rocket about two minutes after liftoff. The spacecraft landed downrange from the Baikonur Cosmodrome in Kazakhstan and the two people on board, Nick Hague and Alexey Ovchinin, were uninjured.

I fully anticipate that @NASA_Astronauts will fly again on the Soyuz spacecraft. pic.twitter.com/Ep48ZtZV9q

Prior to the accident, the next Soyuz launch to the station was scheduled for mid-December, carrying NASA astronaut Anne McClain, Canadian Space Agency astronaut David Saint-Jacques and Roscosmos cosmonaut Oleg Kononenko. Some Russian media reports have suggested that launch could be moved up to as early as late November pending the outcome of the investigation.

The station currently has three people on board, but their Soyuz MS-09 spacecraft will reach the end of its certified on-orbit lifetime of approximately 200 days in late December. If the Soyuz is not ready to return to service by then, the station partners will have to decide if the Soyuz’s time in orbit can be extended or to leave the station uncrewed temporarily for the first time in 18 years.

The incident highlighted the need for what Bridenstine called “dissimilar redundancy” in spaceflight. “In other words, if there is a hiccup in one country’s system, there is another country’s system capable of maintaining the operations until the first country is ready to go again,” he said. That redundancy is currently lacking in transporting crews to the ISS, with the Soyuz the only vehicle able to do so until commercial crew vehicles under development by Boeing and SpaceX enter service, no earlier than mid-2019.

Bridenstine had traveled to Russia not only to observe the launch but also to meet with his counterpart, Dmitry Rogozin, general director of the Russian state space corporation Roscosmos. The two had talked by telephone once before, in September, amid the continuing investigation into a hole found in the Soyuz MS-09 spacecraft at the ISS in August.

At the briefing, Bridenstine emphasized his opinion that the relationship between the U.S. and Russia in space was strong despite tensions in other areas. “It is without question that our two nations have had disputes and we have areas where our interests are divergent,” he said. “It is also true that, when it comes to space and exploration and discovery and science, our two nations have always kept those activities separate from the disputes we have terrestrially.”

Bridenstine and Rogozin met in person prior to the Soyuz launch. “We reaffirmed our commitment to cooperation on the [ISS] and discussed the search for life, planetary defense, and a sustainable presence at the Moon,” Bridenstine tweeted after the meeting.