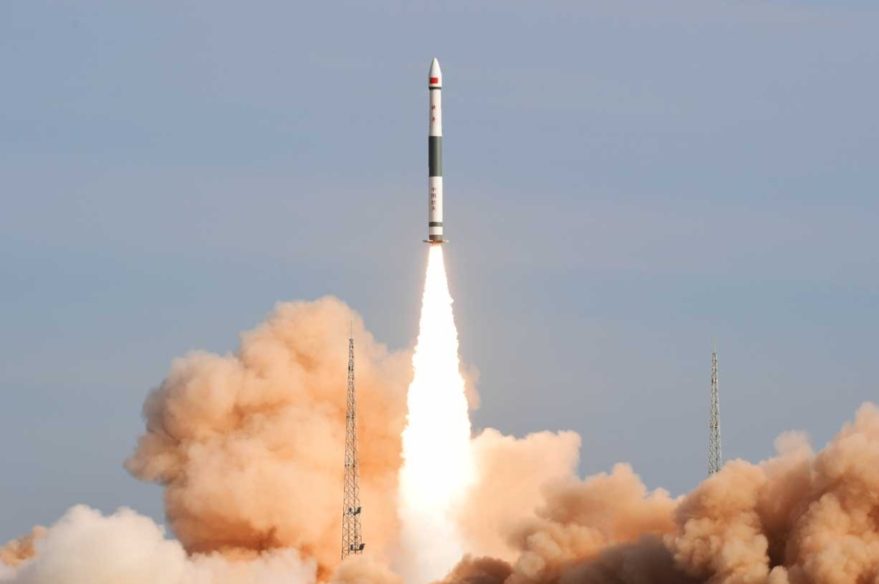 Chinese launch service provider Expace combined with Taobao for the April Fool’s Day stunt. 800 people placed a 500,000 yuan down payment inside five minutes, according to CGTN.

Cao Meng of Expace introduced the Kuaizhou-1A (KZ-1A) service, including launch, custom rocket body art, and access to the launch site. The winning bid was 40 million yuan, with the bidder’s identity not revealed.

The Chinese rocket auction was followed by over two million viewers, and the topic was read over 500 million times on social media platform Sina Weibo as of Friday. Taobao and private Chinese launch firm Landspace jointly promoted a rocket-based postal delivery system on April 1, 2019.

Expace, established in 2016, operates the Kuaizhou-1A. Expace is a commercial subsidiary of the China Aerospace Science and Industry Corporation (CASIC), a giant defense contractor and missile maker.

Kuaizhou launchers are understood to be derived from missile technology. The KZ-1A consists of three solid stages and a liquid propellant upper stage. It is capable of delivering a 200-kilogram payload into a 700-kilometer sun-synchronous orbit (SSO).

The company’s activity recently halted due to COVID-19 and its proximity to Wuhan, Hubei province, the epicenter of the coronavirus outbreak. A Kuaizhou-1A rocket and two Xingyun-2 satellites arrived at Jiuquan in the Gobi Desert late March following resumption of operations.

Launch is to take place in mid to late April. It is being dedicated to the medical workers of Wuhan and is also sponsored by Chinese automaker GAC. Xingyun is a planned LEO narrowband IoT constellation by Expace owner CASIC.

The 20-meter-long Kuaizhou-1A is restricted to launch commercial payloads. Main space contractor CASC launches China’s government and national security payloads. The KZ-1A has launched eight times since its inaugural mission in 2017 and six times since August.

The larger Kuaizhou-11 which may lift as much as 1,000 kilograms to 700-kilometer SSO. The first launch model is currently being prepared for dispatch to Jiuquan for a maiden launch in H1 2020.

Launch firms Landspace, iSpace, OneSpace and Linkspace and are also developing launch vehicles with the aim of providing low-cost launch services domestically and beyond. Galactic Energy, a private Beijing-based launch service provider, is currently aiming to conduct the maiden launch of its Ceres-1 solid rocket in June. A national strategy of military-civilian fusion is assisting the development and launch of commercial rockets in China.