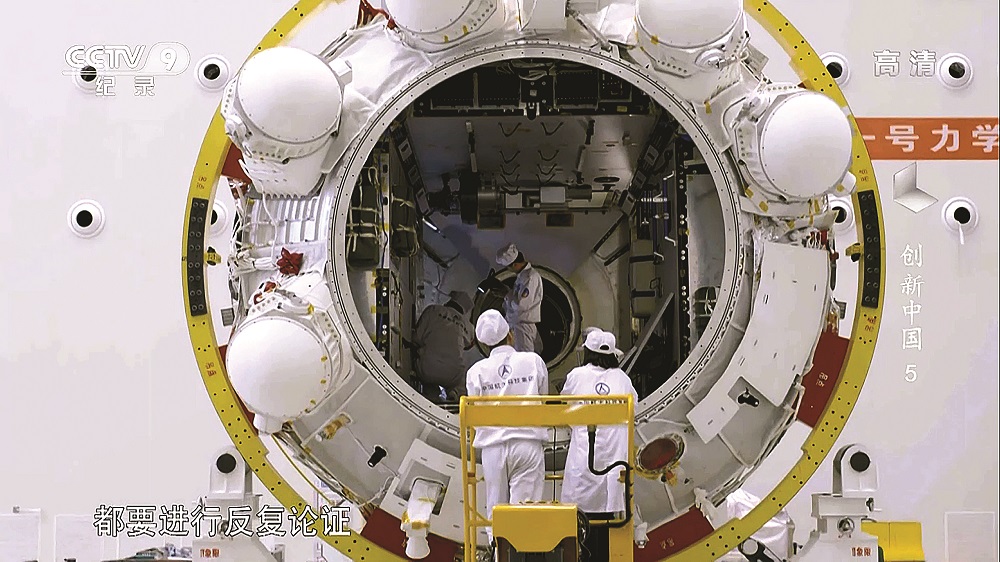 The first module of China’s space station will soon be ready for flight but the required Long March launch vehicle remains grounded.

HELSINKI — The first module for China’s planned space station has passed a final review, but the project continues to suffer launch vehicle-related delays.

The China Manned Space Agency (CMSA) announced Sept. 6 that the 20-metric-ton ‘Tianhe’ module design and prototype had passed final reviews Sept. 2. The flight model would be manufactured in the near future.

Tianhe (‘Harmony of the Heavens’) is the core module for the Chinese Space Station (CSS) and will control the station’s orbit and attitude and function as the main astronaut quarters.

When Tianhe will launch is still unknown. According to previous official statements the first of three modules for the space station was to be launched in 2020, with the complex to be completed by ‘around 2022’.

The ‘around 2022’ time frame had not changed despite ongoing delays in readying the launch vehicle required for the project, suggesting a more compressed schedule.

The timeline for completion has however now shifted to ‘2022-2024’, according to Qi Faren, chief designer of the Shenzhou spacecraft which has facilitated China’s human spaceflight missions.

Qi provided media with the new timeline at a satellite navigation and location services conference in Zhengzhou, Henan Province, Sept. 10.

Qi added that the first flight of the CSS project would be the test launch of the Long March 5B, now expected in the first half of 2020. If successful, that launch would clear the way for launch of the Tianhe module.

The Long March 5B test flight will carry an uncrewed version of a next generation spacecraft for human spaceflight. The successor to the 7.8-metric-ton Shenzhou will feature partial reusability and have a maximum launch mass of around 23 tons.

Qi stated that the new spacecraft would be modular in design and versatile in order to meet the demands of Chinese space development. The 9-meter-long, two-module spacecraft will be capable of missions beyond low Earth orbit, including lunar and deep space missions.

This and other major missions have however been delayed due to problems with China’s Long March 5 heavy-lift rocket.

China had planned to launch the Tianhe core module in 2018, following the test launch of the Long March 5B, the launch vehicle designed to carry the 20-metric-ton space station components into low Earth orbit.

However the July 2017 launch failure of the Long March 5, from which the 5B is derived, has meant these plans have been postponed. Addressing the causes of the failure has required a lengthy process of redesign and testing of the YF-77 liquid hydrogen-liquid oxygen propellant engines. Two YF-77 engines power the rocket’s first stage, with an oxidizer turbopump isolated as the fault behind the 2017 launch failure.

The China Aerospace Science and Technology Corporation (CASC), China’s main space contractor and developer of the Long March 5, announced Jan. 29 that the heavy-lift rocket would fly in July.

SpaceNews reported June 21 that the launch was not going to meet this schedule, though no official comment on the situation has been made. A Chinese language article by China Youth Daily published July 26 article stated that a ‘substantial’ redesign of the YF-77 turbopump for the had recently taken place. No acknowledgement of a delay nor prospective launch date was provided.

Speaking on a launch-related panel at World Satellite Business Week in Paris Sept. 10, He Xing, Executive Vice President of the China Great Wall Industry Corp., a CASC subsidiary, said that he expects the Long March 5 to probably return to flight this year, but was not sure exactly when.

Transporting the Long March 5 components from a CASC manufacturing hub in the northern port city of Tianjin to the Wenchang Satellite Launch Center on the southern island province of Hainan and subsequent preparations for launch have previously taken about two months. The Long March 5 is thus unlikely to fly earlier than December 2019.

The recent public statements from He, CMSA and Qi Faren, do suggest however that the Long March 5 may indeed be in action sooner rather than later.

Also dependent on the rocket is China’s first independent interplanetary mission—to Mars—which is to launch atop a Long March 5 in late July or early August 2020. Missing this window would result in a 26-month, as launch requires specific relative positions of Earth and Mars.

Chang’e-5, a lunar sample return mission, was to launch on the third Long March 5 in late 2017 before the launch failure of the second rocket. While CASC early this year aimed to launch the mission in late 2019, it may now only launch after next year’s Long March 5B test and summer Mars mission.