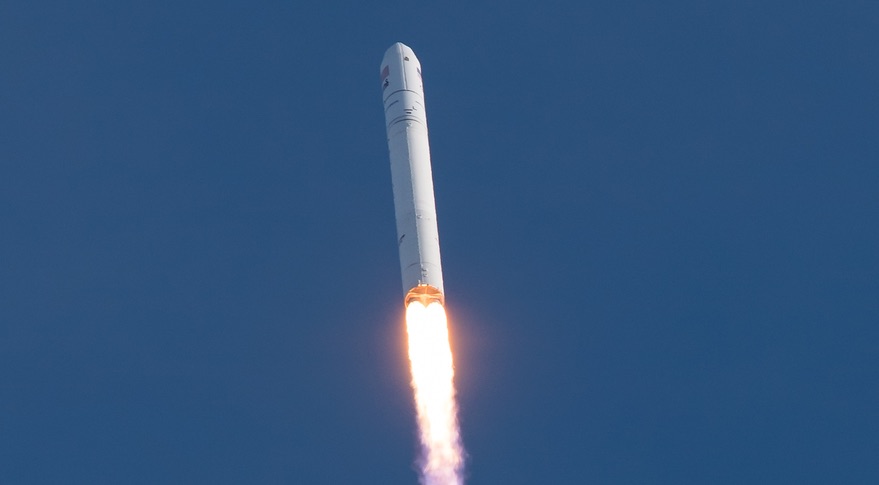 A Northrop Grumman Antares rocket lifted off from Pad 0-A the Mid-Atlantic Regional Spaceport at 3:21 p.m. Eastern, carrying a Cygnus spacecraft on a mission designated NG-13. The Cygnus, now in orbit, is scheduled to be captured by the station’s robotic arm at about 4:05 a.m. Eastern Feb. 18.

The launch was scheduled for Feb. 9 but scrubbed minutes before liftoff because of off-nominal data from ground support equipment. NASA and Northrop Grumman postponed a second launch attempt Feb. 14 because of strong upper-level winds.

The Cygnus is named S.S. Robert Lawrence Jr. after the first African-American astronaut, who died in a 1967 aircraft crash. It is carrying 3,337 kilograms of cargo, including about 1,600 kilograms of vehicle hardware and nearly 1,000 kilograms of science payloads. Crew supplies and other equipment constitute the rest of the cargo on the spacecraft.

Among the payloads on the Cygnus are science experiments to study the effects of microgravity on bacteriophages, which are viruses that attack bacteria, as well as research on the growth of bone cells. The spacecraft is carrying the first scanning electron microscope for use in space, called Mochii and developed by Seattle-based company Voxa, to support station research.

“We’re really excited for a lot of the science that Cygnus is bringing up. Cygnus is a huge enabler of continuing the science on ISS,” said Heidi Parris, assistant program scientist for the ISS program at NASA, during a Feb. 8 pre-launch briefing at the Wallops Flight Facility here.

The vehicle hardware on Cygnus includes a new communications system called ColKa for the Columbus module on the station that will provide increased bandwidth by communicating through the European Data Relay System satellites. A new external high-definition camera is on board that will replace a similar, failed camera during a spacewalk tentatively scheduled for the spring.

The Cygnus will remain at the station until May, departing with about 3,700 kilograms of trash for disposal. After departing from the station, Cygnus will carry out the latest in a series of combustion experiments, called Saffire-4, to test how materials burn in microgravity with varying amounts of oxygen before the spacecraft reenters.

This launch comes only three and a half months after the previous Cygnus cargo mission, NG-12, which launched Nov. 2. That is the shortest time between Cygnus missions, which in the last few years have been spaced, on average, about six months apart.

“That’s a little more compressed than we’ve been doing, so we’ve been working hard,” said Kurt Eberly, Antares vice president at Northrop Grumman, at the pre-launch briefing. He said the company tapped into other resources, such as technicians who work on other vehicles at Vandenberg Air Force Base in California, to accelerate the preparations for this launch.

“We’re happy to be able to respond to whatever our customer has needed,” said Frank DeMauro, vice president and general manager of tactical space systems at Northrop Grumman, who said that NASA had asked Northrop to move up the launch a couple of months.

The next Cygnus mission to the ISS is currently scheduled for October, but could change depending on the schedule of commercial crew missions. After April, the station will have only a three-person crew, including just one American astronaut, Chris Cassidy, until SpaceX’s Crew Dragon or Boeing’s CST-100 Starliner starts flying astronauts to the station.

“We are discussing the best cadence on which to launch the cargo missions, and one factor is when we’ll have crewmembers on board,” said Ven Feng, manager of NASA’s ISS Transportation Integration Office. The schedule of commercial crew vehicles as well as plans to complete science investigations on the station are key factors in that planning.

Feng said that Northrop has done a “tremendous” job demonstrating its ability to fly earlier than planned for the NG-13 mission. “We may pull on that again in the near future,” he added.