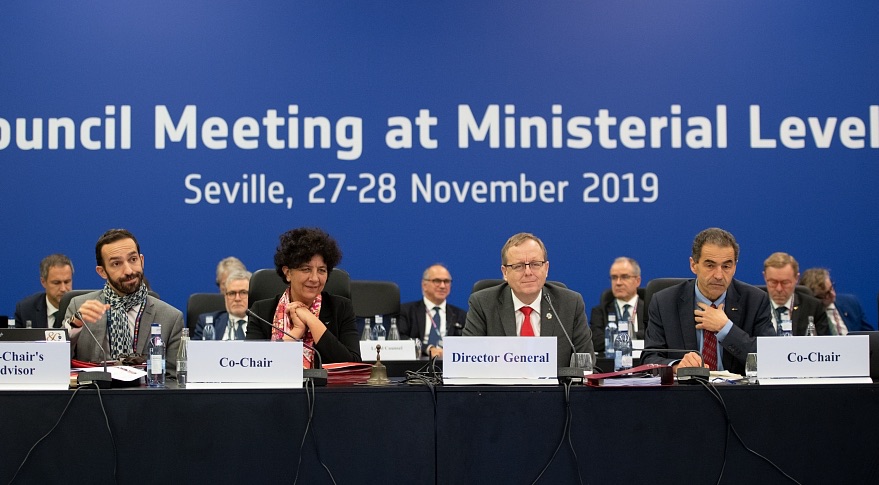 SEVILLE, Spain — The European Space Agency’s member states agreed to provide nearly 12.5 billion euros ($13.8 billion) for the next three years, giving the agency nearly all that it requested.

At the conclusion of a two-day ministerial meeting, called Space19+, here Nov. 28, ESA said it was able to get all the initiatives it included in its budget proposal approved, although with at least minor modifications to some programs.

“You have a happy DG in front of you,” ESA Director General Jan Woerner said at a press conference at the end of the meeting.

The allocations, Woerner said, were sufficient to fund all of the programs it requested, an improvement over the previous ministerial in 2016 when ESA failed to win funding for an asteroid mission. “There was not a single program which we had to stop, as last time,” he said.

However, some programs fared better than others. ESA requested 600 million euros for space safety programs, but received only 432 million. That is enough to fund work on the Hera asteroid mission, but Woerner said a space weather mission that would operate at the Earth-sun L5 Lagrange point will focus instead on instrument development over the next three years.

“We can do what we wanted to do, but some of the actions have to be a little bit delayed,” Woerner said, citing the changes to the space weather mission as one example. “We intended to get more, but this life.”

By contrast, Earth observation programs received more than requested, with 2.54 billion euros versus a request of 2.39 billion. That includes a 29% oversubscription for ESA’s contributions to the European Union’s Copernicus program.

“It’s a very strong signal from ESA’s member states to Europe that, first of all, ESA is a very strong partner with the European Commission,” said Josef Aschbacher, director of ESA’s Earth observation programs. The additional funding, he said, will go towards new instruments for measuring carbon dioxide levels in the atmosphere with increased accuracy as well as hyperspectral sensors. “In short, what we are doing is more robust.”

Exploration programs received almost exactly the amount requested: 1.953 billion euros versus a request of 1.98 billion. “For Europe this is extraordinary,” said David Parker, director of human and robotic exploration at ESA, in an interview after the press conference.

The funding will allow ESA to move ahead on various initiatives, ranging from continued utilization of the International Space Station to participation with NASA in a Mars sample return initiative to lunar exploration. That includes 300 million euros to start work on two modules for the NASA-led lunar Gateway, a refueling and telecommunications module called European System Providing Refueling, Infrastructure and Telecommunications (ESPRIT) and a habitation module to be developed in cooperation with Japan. A large robotic lunar lander for carrying cargo to the lunar surface, and potentially as part of a sample return system, received 150 million euros.

Telecommunications received 1.51 billion euros, compared to a request of 1.74 billion euros. Magali Vaissiere, director of ESA’s telecommunications programs, emphasized the budget represented an increase of more than 30% from the previous ministerial, and that there was flexibility to allocate the funding among various programs as needed.

Space transportation programs received 2.24 billion euros over the next three years. That covers upgrades for both the Ariane 6 and Vega C vehicles to be introduced in 2020 as well as support for small launch vehicle development. That program also funds Space Rider, an Italian-led program for a reusable spacecraft similar to the Dream Chaser or X-37B.

“Ariane 6 and Vega C are the solid cornerstones on which we will build our collective future successes,” said Stéphane Israël, chief executive of Arianespace, in a statement after the ministerial. “The programs approved for the joint upgrade of Ariane 6 and Vega C will make innovation and competitiveness benefit all our customers.”

The two ministers who served as co-chairs of Space19+ said at the press conference that the outcome emphasized European unity in space. “If this is a success, it was a success in our view in terms of the consensus that was built,” said Manuel Heitor, Portuguese minister of science, technology and higher education.

“We have made Europe a leader in space together,” said Frédérique Vidal, French minister of higher education, research and innovation, “and together we will be able to maintain that position and enhance it.”

Two Dead Every Minute: U.S. Covid-19 Cases Surge In 2021
Facebook will block Trump from posting at least for the remainder of his term
Fighting deforestation should be a top priority for 2021, and here’s how it can be
How Black users are saving Clubhouse from becoming a drab hangout for tech bros
Intelsat orders two satellites from Airbus