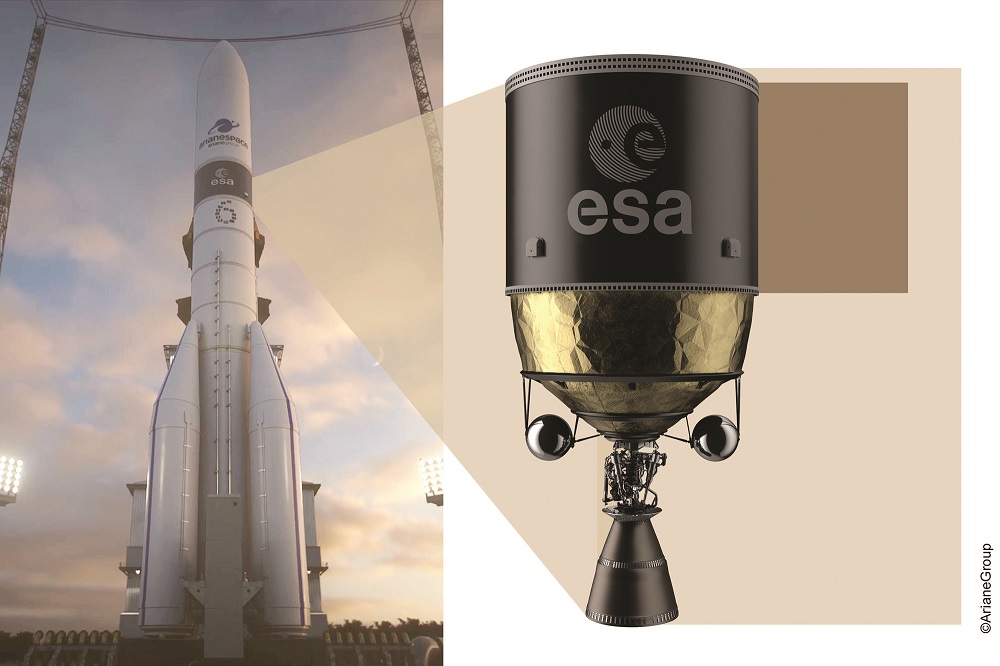 Europe’s Ariane 6 rocket is a year away from its maiden flight, but prime contractor ArianeGroup is already preparing upgrades its says can be introduced in the launcher’s first three years of service.

Bonguet said ArianeGroup is preparing to pitch a Continuous Improvement Program, or CIP, for Ariane 6 at the European Space Agency’s ministerial conference this month. “We think now that this launcher has some further potential to evolve, to decrease costs and improve performance and mission capability,” he said.

The first Prometheus reusable engine is on track for completion by the end of 2020, with ground testing to follow. ArianeGroup is preparing the engine for use in the 2030s, but Bonguet said the company can start applying Prometheus technology to Ariane 6’s expendable Vulcain 2.1 first-stage engines and Vinci second-stage engines. Prometheus, in addition to being reusable, leverages extensive 3D printing with the goal of costing 1 million euros to manufacture (a tenth the cost of Ariane 5’s Vulcain engine). Bonguet said spinoff technologies like electrical valves and 3D-printed parts from Prometheus could reduce the cost of Ariane 6’s expendable engines.

Ariane 6’s upper stage includes a small propulsion system called the Auxiliary Power Unit, or APU, to deliver satellites directly into circularized geosynchronous orbit instead of a typical elliptical transfer orbit. Direct injection spares satellites from using their fuel for orbit raising, thereby extending their lives. Bonguet said ArianeGroup wants to increase how many minutes the APU can run so that Ariane 6 can fast-track more than 5,000 kilograms straight to GEO. The APU will also enable sequential spacecraft separations to prevent the risk of collisions.

In May, ESA tasked ArianeGroup and German company MT Aerospace with developing a prototype upper stage using carbon composites instead of aluminum. The successor to the prototype is the Innovative Carbon Ariane Upper Stage, or Icarus, made of carbon-fiber reinforced plastic. Icarus, also referred to as the “black upper stage” due to its coloring, won’t be ready until at least 2025, but Bonguet said ArianeGroup could, through CIP, implement a “composite cylindrical structure” in 2023 “without waiting for the complete black upper stage.” The carbon fiber technologies will make Ariane 6 lighter, enabling the rocket to carry heavier payloads.

Ariane 6 uses two or four solid rocket boosters, with the number attached determining how much the rocket can ultimately lift. Bonguet said the dual-use nature of solid rocket booster technology for military applications prevents naming specific improvements, but that ArianeGroup wants ESA funding for “simplifying the design” and “improving the manufacturing processes.” Europropulsion, a 50-50 joint venture between ArianeGroup and Avio, builds the boosters, with Avio supplying the motor cases and ArianeGroup bringing the nozzles. A second Arianegroup-Avio joint venture called Regulus (60% Avio, 40% ArianeGroup) produces the propellant.

Mars 2020 ready for launch
Virologists divided over plans to change virus-naming rules during the pandemic
It’s official: NASA’s next mission to Mars has been cleared for launch this Thursday
This Potential Tropical Storm In The Caribbean Is A Headache For Forecasters
Jeff Bezos has been on a collision course with D.C. for years — this week’s hearing marks a new chapter