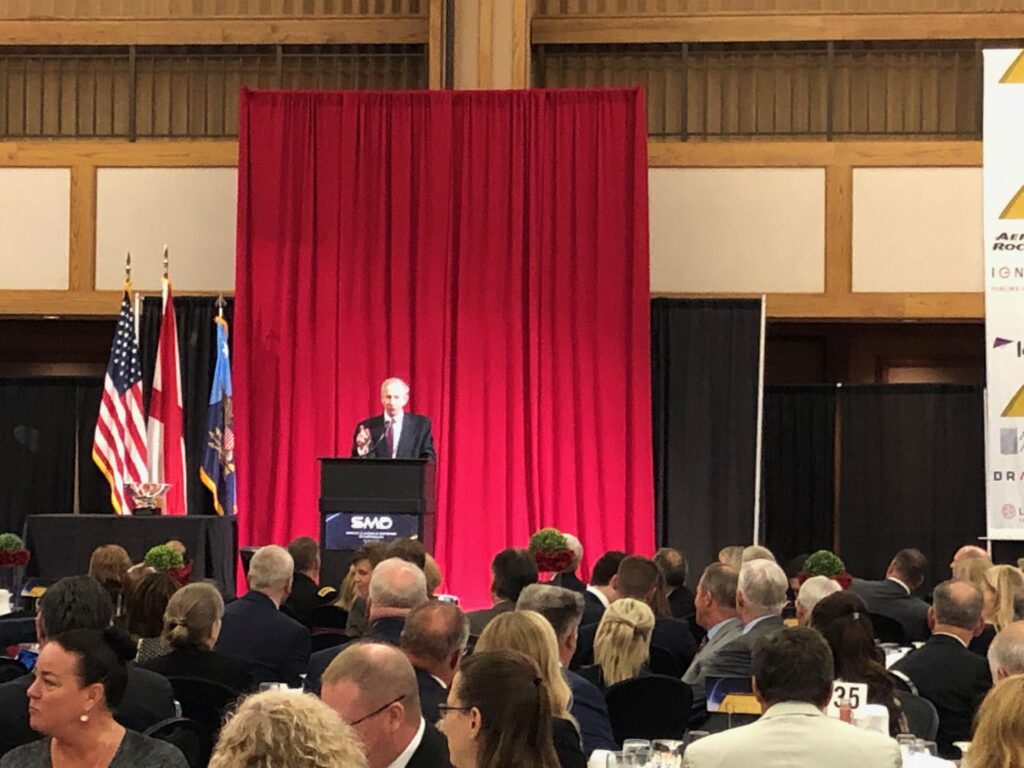 Griffin: “Some elements of Congress are very supportive. Others are skeptical.”

HUNTSVILLE, Ala. — The Space Development Agency has an ambitious agenda, including the design of a military space architecture in low Earth orbit that would enable global communications and help protect U.S. forces from missile attacks. But work remains largely on hold until Congress approves funding and gives the SDA a vote of confidence.

“Right now what we have are plans for plans,” said Mike Griffin, undersecretary of defense for research and engineering. The SDA currently sits under his office and is led by an acting director.

At the Space & Missile Defense Symposium on Wednesday, Griffin made his familiar pitch for the development of a layer of space sensors to detect and track hypersonic weapons developed by China and Russia, and viewed as a looming threat to the U.S. military. The so-called space sensor layer would be a team effort by the Missile Defense Agency and the SDA. But Griffin said he could not discuss specifics on who will be in charge or what technologies will be acquired “until we have funding for all these things from Congress.”

“Some elements of Congress are very supportive. Others are skeptical,” Griffin said during a meeting with reporters.

A year ago when Griffin spoke at the same event, the SDA had not yet been established but plans were already underway. The agency had a major advocate in then deputy defense secretary Patrick Shanahan. But Shanahan is now gone and Griffin has assumed the role of SDA champion amid questions about the future of the agency. Griffin now frequently has to explain to congressional committees why the SDA should exist.

“What I tell them is that the SDA is the orchestra conductor for the proliferated space architecture we’re advocating,” Griffin said. “But it is not our intention with SDA to take over all things space,” he added. “We see this need for a much more proliferated architecture” of large numbers of satellites that would make it harder for an enemy to take down.

“None of this will happen if our team is unable to convince the Congress that we need to take a right turn in our space architecture,” Griffin said. He insisted that he is not calling for DoD to replace satellites in geostationary Earth orbit with LEO systems. When he speaks about the SDA’s vision, “it comes across as ‘Mike doesn’t want to have a GEO architecture.’” But that is not true, he said. The problem is that “our adversaries are holding those GEO assets hostage and we have to respond.”

Griffin said he meets regularly with Deputy Defense Secretary David Norquist as DoD drafts its budget proposal for fiscal year 2021. A more immediate priority for Griffin is to secure support for the $149 million DoD requested for the SDA in fiscal year 2020. He said he is “pretty confident” that the agency will get funding. “Congress is not of one mind about anything,” said Griffin. “DoD has four oversight committees. They vary in their support of various initiatives,” he added. “In the end they have to produce a bill.”

“I’m frequently on the Hill,” Griffin said. He acknowledged that the narrative about SDA has been confusing. “There is a certain amount of misunderstanding.”

In a keynote speech Wednesday evening at the symposium, Griffin said he can’t guarantee the SDA will succeed but it is worth giving it a try because DoD has to do business differently when it comes to space. “There is a risk that we will make mistakes,” he said. “However there is a certainty that if we don’t do something differently, we will not prevail.”