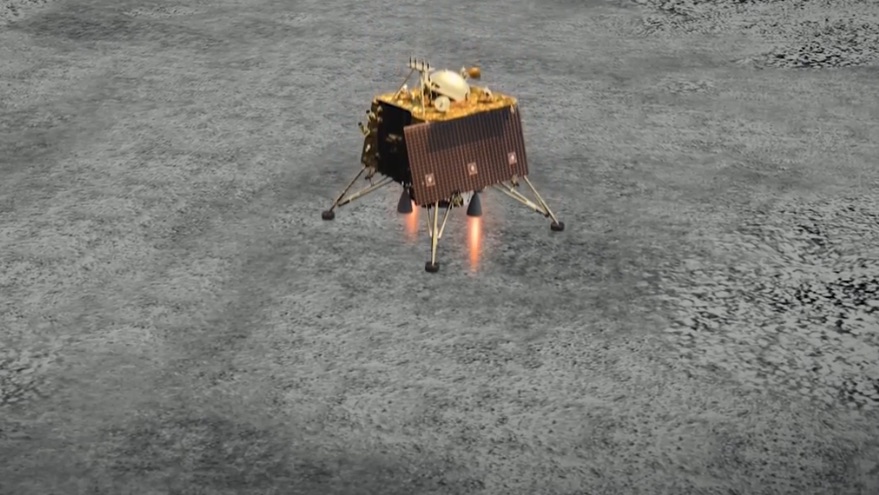 At a New Year’s Day press briefing, Kailasavadivoo Sivan, chairman of the Indian Space Research Organisation (ISRO), said that the Chandrayaan-3 lunar lander mission, along with the Gaganyaan human spaceflight program, will be top priorities for ISRO in 2020, although neither may fly until 2021.

“This year is going to be the year of Chandrayaan-3 and Gaganyaan, I would say,” Sivan said at the briefing.

Sivan used the briefing to formally announce the start of the Chandrayaan-3 mission, which will be India’s second attempt to land on the moon after the failure of the Vikram lander, part of the Chandrayaan-2 mission, in September. Indian officials had, in recent weeks, made it clear a new lunar lander mission was in the works, but prior to the briefing there was no official confirmation of those plans.

“One major announcement I wanted to make here, officially, is that Chandryaan-3 is government-approved,” he said. “The project is now formed. The activities for Chandrayaan-3 are going very smoothly.”

Unlike Chandrayaan-2, which included an orbiter and a lander, the latter carrying a rover, Chandrayaan-3 will only have a lander and rover, along with a propulsion module to transport the spacecraft to the moon. Chandrayaan-2’s orbiter, Sivan said, is functioning well and could last as long as seven years, so there is no need for a new orbiter.

Sivan provided few new details about what caused the crash of the Vikram lander in September. In November, Jitendra Singh, minister of state for the Department of Space, informed the Indian Parliament that the spacecraft “hard landed” when it slowed down more than expected during the second phase of its descent. NASA released images of the crash site Dec. 2 taken by the Lunar Reconnaissance Orbiter spacecraft.

At the briefing, Sivan reiterated that it was the second phase of the landing that caused problems. “The first phase went very well. In the second phase, the velocity reduction was more than expected,” he said, which later phases of the landing could not compensate for. “The control and guidance system was not designed for this large deviation.”

Other ISRO officials at the briefing said that a report investigating the failure had been submitted to the government, but that report, or a summary of it, has yet to be made public.

Sivan did not commit to a launch date for Chandrayaan-3 in his prepared remarks, although other government officials, including Singh, have previously said the mission could launch as soon as November 2020. Indian media reported that Sivan later said it could take 14 to 16 months to complete the spacecraft, pushing the launch to 2021.

The other priority Sivan mentioned at the briefing is the Gaganyaan human spaceflight program. That project was formally announced by Indian Prime Minister Narendra Modi in August 2018, with a goal of launching Indian astronauts into orbit by August 2022, the 75th anniversary of India’s independence from the United Kingdom.

“We had good progress in 2019 on Gaganyaan,” he said. He revealed that ISRO has selected four astronauts to begin training later in January, but did not disclose their identities.

While those astronauts start to train for a crewed spaceflight, ISRO will work on the design of the spacecraft. “Many systems now need to be tested before flight,” he said, including human-rating of the spacecraft’s propulsion module and testing of a launch escape system.

As with Chandrayaan-3, Sivan didn’t disclose a date for that crewed mission, beyond “very soon.” Earlier reports indicated ISRO was targeting late 2021 for that first crewed flight, after an uncrewed test flight of the spacecraft in late 2020.

While Chandrayaan-3 and Gaganyaan received the bulk of the attention at the briefing, Sivan also discussed several other new and ongoing programs at ISRO with milestones in the coming year. Those include the first flight of the new Small Satellite Launch Vehicle (SSLV), a solid-fuel rocket designed to place up to 500 kilograms into low Earth orbit, as well as the first flight of the GSLV with a new payload fairing four meters in diameter needed for larger spacecraft.

Initial SSLV launches will take place from ISRO’s existing spaceport at Sriharikota. Sivan, though, confirmed at the briefing that the government had acquired 2,300 acres in the southern Indian state of Tamil Nadu for a second spaceport. That site, he said, was selected specifically to support SSLV launches on southern trajectories needed to reach sun-synchronous and other polar orbits. He did not state when ISRO expected to conduct the first launch from that facility.

Robots, clocks and computers: How Ancient Greeks got there first
Airbus, citing weak space market, to cut more than 2,300 jobs
Spaceflight Industries says sale of rideshare business a “win-win” for all parties
Speed science: The risks of swiftly spreading coronavirus research
Op-Ed | The United States won’t go back to the moon, I’ll follow China there instead