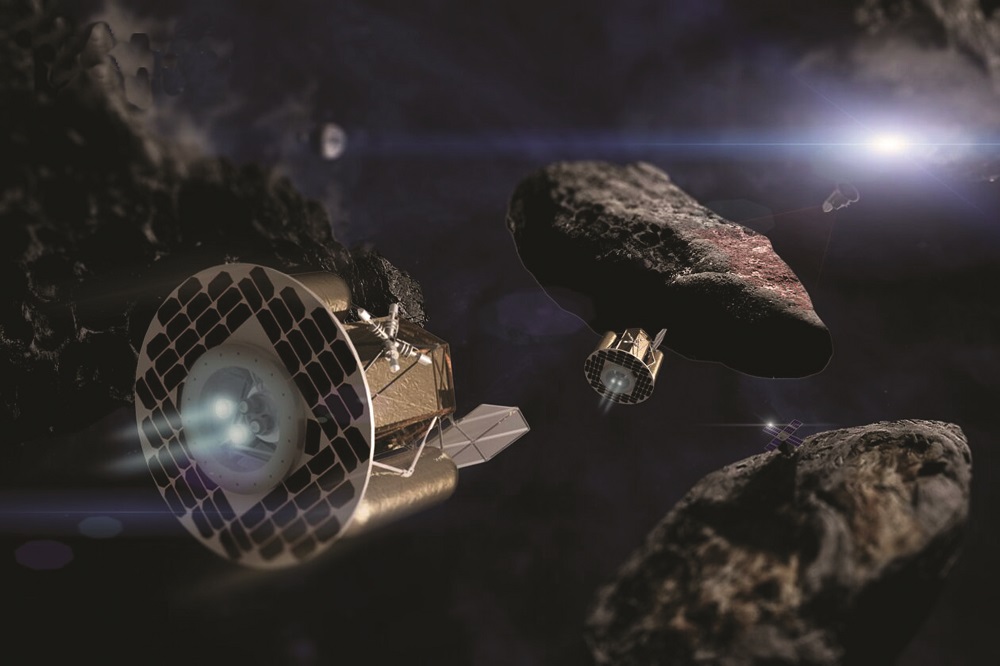 Étienne Schneider, deputy prime minister of Luxembourg, frequently tells the story of how he got interested in building a space resources industry in the country. His efforts to diversify the country’s economy several years ago led to a meeting with Pete Worden, at the time the director of NASA’s Ames Research Center and a proponent of many far-reaching space concepts. During an Oct. 22 panel discussion at the International Astronautical Congress (IAC) in Washington, he recalled Worden advocating for commercial space: “Why shouldn’t you go for space mining activities?”

“When he explained all this to me, I thought two things,” Schneider said. “First of all, what did the guy smoke before coming into the office? And second, how do I get him out of here?”

He eventually bought into Worden’s vision, starting a space resources initiative that attracted companies to the country while enacting a space resources law like that in the United States. By the beginning of 2019, though, it looked like it might all be a bad trip. The two major startups in that industry, Deep Space Industries and Planetary Resources, had been acquired by other companies with no interest in space resources. Worse, the Planetary Resources deal wiped out an investment of 12 million euros Luxembourg made in the startup.

Schneider is undaunted by those setbacks as he continues work to make Luxembourg a hotbed of entrepreneurial space, a scope that has expanded beyond, but has not abandoned, space resources. During the IAC, the country’s year-old space agency signed an agreement with NASA to explore potential cooperation, building on an agreement Luxembourg signed with the U.S. Commerce Department in May. Just before the conference, Luxembourg announced it would partner with the European Space Agency on a space resources center in the country.

Schneider and Mario Grotz, director of research in Luxembourg’s Ministry of the Economy, discussed those initiatives with SpaceNews during the IAC.

A condensed version of the interview follows.

The Luxembourg Space Agency is signing a memorandum of understanding with NASA. What are your aims with that agreement?

Schneider: In June, we met with [NASA Administrator Jim] Bridenstine and we talked about signing an agreement of cooperation between NASA and the Luxembourg Space Agency. Our aim is to really develop together all kinds of new activities in space. We’re trying to bring U.S. companies together with Luxembourg-based companies and see how they can cooperate. Through our Luxembourg Space Agency, we want to open the doors for them to ESA programs as well. That’s why it’s important for us to have this collaboration with NASA.

What’s the next step after signing the agreement?

Grotz: The next step will be to go into depth and see what topics, what projects we can do together, and how we can make sure our companies contribute to the technologies that will also be needed for the Artemis program.

You also announced an agreement with ESA to establish a Space Resources Research Center. What’s the goal of that effort?

Schneider: We were working together with the various research institutes in Luxembourg and with the University of Luxembourg. But we came to the conclusion that in order to really progress in research about space resources, we should have a proper Space Resources Research Center. The good thing is that ESA is very much interested in cooperating in this research center. In November, there will be a minister’s council of ESA in Spain, where we hope we will get the agreement of the member states to have ESA on our side developing this research center. I think it will show the lead of Luxembourg in the European Space Agency about NewSpace activities and space resources.

How long until the center is up and running?

Schneider: It might take a year, but we will start immediately. We are already trying to hire people now. We will still continue working with other research centers in Luxembourg and abroad.

Now that the space resources initiative is a few years old, how would you judge your progress?

How many of those companies are focused on space resources in one way or another versus a broader definition of NewSpace?

Schneider: These companies have a broader view on activities in space because, for space mining, you will not have revenues for many years. You need to have short-term initiatives to earn some money on the way. We want this community to develop in Luxembourg and build this new venture together.

Did the sale of Planetary Resources have any repercussions on your efforts?

Schneider: It had some on me and my election results last year, but apart from that it didn’t change anything in our strategy. But it’s always like that: when you fail with something, the opposition is going to make a big fuss about it. I always said that this initiative is high risk, and you have to accept that sometimes you’ll fail. I don’t see this as a dramatic situation. It’s life.

You’ve talked about establishing a venture capital fund for space companies. What is the status of that?

Schneider: We expect to launch it at the end of this year. We’re still building up our teams.

Will it be limited to space resources companies, or will other space ventures be eligible?

Grotz: You need a deal flow of companies, and of course today the deal flow just for companies focusing on space resources is not enough. So, we have broader interests.

Has Luxembourg’s space resources law, giving companies based in the country rights to resources they extract from the moon or asteroids, helped attract companies?

Schneider: Absolutely. Due to this legal framework, they can be sure about owning, possessing and commercializing whatever they do in space. The legal framework in the U.S. has a condition that you are only covered if your capital is majority U.S.-owned. But you have startups going into B and C rounds that need huge amounts of money, and if they can’t find enough American capital, they have a problem because they don’t fall under the law any more. These are companies that are interested in at least taking a look at Luxembourg because we don’t have that requirement.

Besides your partnerships with the U.S. and with ESA, are there other countries you’re seeking to cooperate with?

Schneider: We’ve signed about nine agreements now, and we’re getting to a point where we think it’s better to get more in depth with the countries we’ve signed with than signing with even more countries. For us, one of the most important agreements was the one we signed with [Commerce Secretary] Wilbur Ross, and we really want to try and push on this. That’s why it was important for us to sign this agreement with NASA.

What’s next for the space resources initiative?

Grotz: We have the law on space resources, but we’re planning a comprehensive space law for all different types of activities. I think it’s very important that we have regulations that are up to date for all activities. That will probably be the beginning of next year.

Is that law intended to enable new space activities, or better coordinate existing ones?

Schneider: It’s more like coordinate and consolidate. We want to have one legal framework that covers everything, so it’s easier for companies to find their way. The government was reelected last year and so for another five years you can be sure that the government sticks to its engagement, its initiative, so that this will continue to be developed. That’s a kind of security. Political security is important for investors.

What level of public interest and support is there in Luxembourg for the space resources initiative?

Schneider: In the public’s mindset it’s becoming a real and interesting topic. Everybody’s talking about it, and the media’s talking about it quite a lot. In the beginning, people were joking about it because they didn’t see any sense in it, and didn’t see Luxembourg being an important player in this. But this has changed. People see that Luxembourg is going forward and showing the way for many European countries. Now it’s something that’s really accepted. People are really a little bit thrilled to see what will be next. For us as a government, it’s quite important to know that public opinion is more and more in favor of what we’re doing.