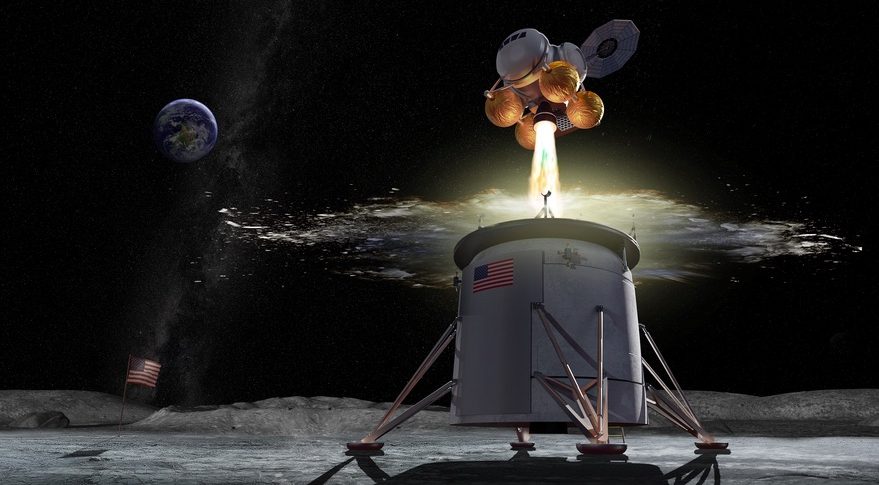 DALLAS — NASA’s Marshall Space Flight Center will manage the agency’s efforts to develop a lander needed to achieve the goal of landing astronauts on the moon by 2024, an announcement overshadowed by political wrangling about what center should be responsible.

NASA Administrator Jim Bridenstine, speaking at Marshall and flanked by three House members from Alabama and Tennessee, said that the Huntsville, Alabama, center will have overall responsibility for the Human Landing System program, which will oversee industry development of a human-rated landing system.

“This was not a decision that was made lightly,” Bridenstine said. “A lot of hard work has been done here in Huntsville over, really, well over 10 years now regarding landing systems.” He cited as evidence past projects like the International Lunar Network and the lander for the proposed Resource Prospector mission, although neither resulted in actual lunar landing missions.

However, several members of Congress from Texas, in an Aug. 15 letter to Bridenstine, objected to those plans, first reported Aug. 13 by Ars Technica. They argued that, given its history in managing human spaceflight programs, Johnson, and not Marshall, should lead lander development.

“We are deeply concerned that NASA is not only disregarding this history but that splitting up the work on the lander between two different geographic locations is an unnecessary and a counterproductive departure from the unquestionable success of the previous lunar lander program,” stated the letter, signed by Sens. Ted Cruz (R-Texas) and John Cornyn (R-Texas) and Rep. Brian Babin (R-Texas).

The three members asked that NASA “hold off on any formal announcements until we receive a briefing on this matter that includes the timeline, projected cost, and rationale for this decision.” Babin, who was previously scheduled to be at the event, did not attend.

NASA went ahead with the announcement, but Bridenstine had to handle several questions about the controversy. “I understand some of their concerns,” he said of the Texas members of Congress. “We love the work that Johnson does.”

Bridenstine also noted that, even though Marshall will manage the program, there will not be a significant difference in jobs between the two centers. He said that of the 363 jobs associated with the lander program, 140 would be at Marshall and 87 at Johnson, with the rest at other NASA centers.

Marshall, he argued, was the best center to lead the overall effort because of its expertise in propulsion. NASA’s baseline architecture for the lunar lander system involves three elements: a transfer stage to move from the Gateway to low lunar orbit, a descent module and an ascent module. Two of them, the transfer stage and descent module, “are highly focused on propulsion, and I would argue that when it comes to propulsion, there is no place in the world that is more experienced and better than the Marshall Space Flight Center.”

While Marshall will manage the overall lunar lander program, much of the work will be done elsewhere by companies, as NASA plans to develop the lander systems using public-private partnerships.

“That’s kind of new to us,” said Lisa Watson-Morgan, the Marshall official selected to manage the lander program. “In the past, typically we’ve had a government reference design and we’ve handed that over to commercial and let them prime it. We’re doing it a little differently this time.”

However the program is managed, the success of the lander effort will depend on getting appropriate funding. NASA, in a supplemental budget request in May, sought an additional $1.6 billion for exploration programs, including $1 billion for lander development. The House did not take up the request when it drafted appropriations bills in May, and the Senate has yet to take up its version of a fiscal year 2020 spending bill.

Bridenstine was optimistic that the funding would come from Congress. “We’ve had great support from Congress, from both sides of the aisle in both chambers,” he said.

The three members of Congress who attended the event were all House Republicans. “It’s also important that we have congressmen and senators who are willing to put together the funding that is necessary to make this happen,” said Rep. Mo Brooks (R-Ala.), whose district includes Marshall.

“The request that NASA has put in through the administration for $1.6 billion, we’ll make that happen,” vowed Rep. Robert Aderholt (R-Ala.), ranking member of the commerce, justice and science appropriations subcommittee, which funds NASA. “We can make sure NASA has the resources to make sure the president’s vision to have a man and woman on the moon, on the south pole of the moon, by 2024 happens.”