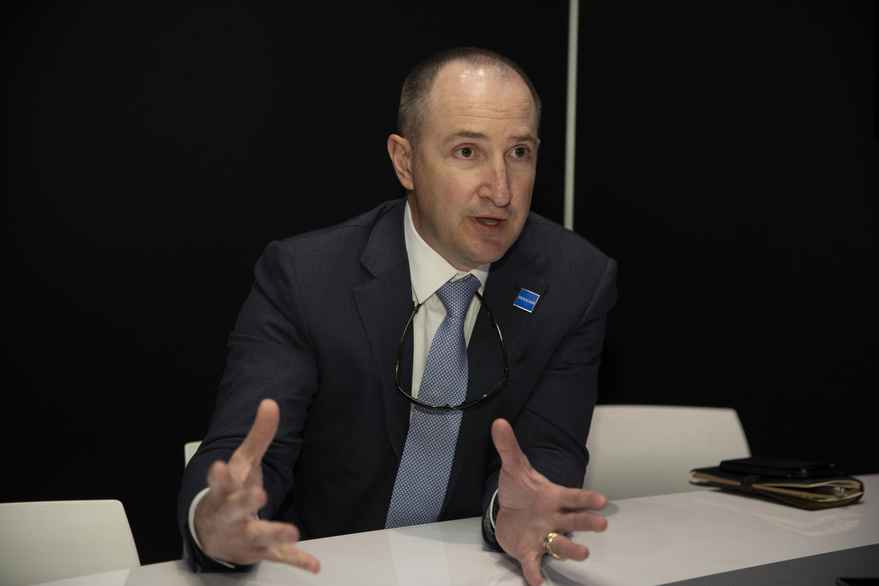 WASHINGTON — Maxar Technologies on Nov. 4 said an undisclosed customer has agreed to buy a geostationary communications satellite, providing what Maxar offered as proof that retaining and resizing Space Systems Loral was a worthwhile decision.

In an earnings call, Maxar CEO Dan Jablonsky said the WorldView Legion constellation Maxar Space Solutions is building will save the company money over previous generations of outsourced remote-sensing satellites, but is “not ideally timed” from a capital expenditure perspective. Maxar can’t devote as much cash to paying off debt as desired while financing the constellation, which he said will be six satellites.

To create financial breathing room, Maxar announced a private offering of $1.25 billion of senior secured notes due in 2023. Biggs Porter Maxar’s chief financial officer, said the refinancing, once complete, should allow the company to repay a $500 million loan and part of a $696 million revolving credit facility.

Jablonsky said Maxar is considering steps in addition to the property sale and refinancing in order to reduce its leverage.

Jablonsky said Maxar has recently been awarded a geostationary communications satellite order that would be built on the company’s flagship 1300 platform. Jablonksy said Maxar is “still working through the contract details” to finalize the order, but that Maxar feels the agreement is evidence of a recovery.

“Going forward, I am confident we will continue to book additional GEO comsat orders over time as the market recovers,” he said.

Satellite operators have booked 11 other large commercial satellites this year (not counting Ovzon-3, which Maxar announced in December, though the contract wasn’t finalized until July). The unnamed customer is Maxar’s first GEO comsat order announced in 2019.

Maxar is working on diversifying away from heavy reliance on the commercial market. Jablonsky said the company received multiple study contracts for civil space, Defense Department and classified work with the U.S. government.

Maxar transitioned from a Canadian company to a U.S. company in January. Since then, it has booked NASA contracts to build the Power and Propulsion Element for the future Lunar Gateway space station, and to host the TEMPO environmental hosted payload on a commercial satellite.

While increasing its focus on government business, Maxar is also competing to build Telesat Canada’s low Earth orbit broadband constellation — a contract that could cover 300 satellites.

Jablonsky said Maxar chose to dissolve its partnership with Franco-Italian manufacturer Thales Alenia Space in favor of a standalone pursuit of Telesat LEO work “given an evolving procurement strategy of our customer.”

“We view this as a positive outcome for Maxar, as it will allow us to bid on the areas where we feel we have competitive advantages across our capability set and manufacturing geographies,” he said.

Telesat was expected to decide on a manufacturer this year, but it is unclear what impact the splintering of the Maxar-Thales Alenia Space partnership will have on that timeline. Airbus Defence and Space, which is building the OneWeb constellation, is also competing for Telesat LEO.

Maxar until now had not disclosed how many satellites would comprise the WorldView Legion constellation it’s been discussing since 2017. Jablonsky said that the future six-satellite constellation will be able to image the same locations on Earth more than 15 times in a single day.

Two WorldView Legion satellites will have enough imaging capacity to replace Maxar’s WorldView-4 satellite, which failed in December after just two years in orbit. Maxar, in a filing with the U.S. Securities and Exchange Commission, said it received the full $183 million insurance payment for WorldView-4 this spring.

Jablonsky said WorldView Legion will launch in 2021, and will triple the company’s ability to collect 30-centimeter resolution imagery. Maxar is budgeting $600 million for WorldView Legion, he said.

Biggs said once WorldView Legion is complete, Maxar is poised to redirect spending to paying off debt.

“Our investment in the Worldview Legion constellation will continue for two more years, after which we will be positioned to have much greater free cash flow to de-lever,” he said.

Jablonsky said that after building six Legion satellites, additional Legion spacecraft would have low non-recurring engineering costs and can therefore be built much less expensively than if they were individual projects.

Maxar reported $479 million in revenue for the months of July, August and September, down $30 million from the same time last year. The company recorded a net loss of $26 million for the quarter, in contrast to a $289 million net loss for the third quarter of 2018.