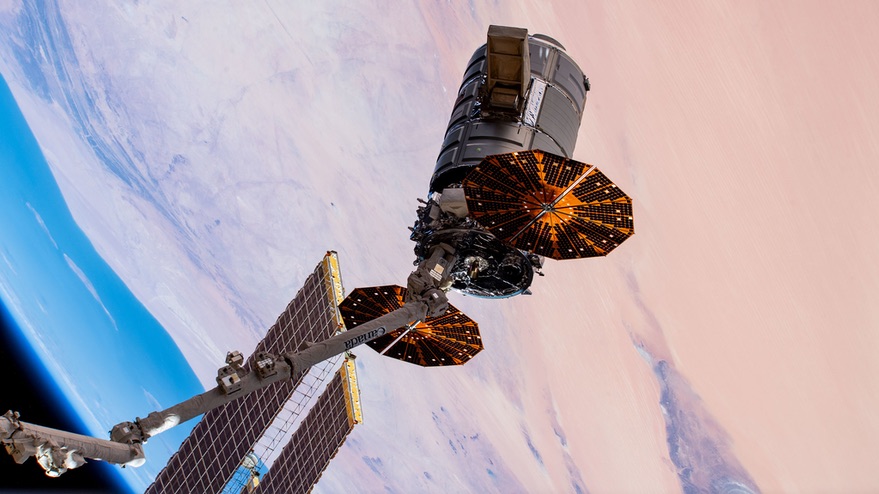 WASHINGTON — NASA is taking the next small step in its efforts to promote commercialization of low Earth orbit by flying a cosmetics company’s product to the International Space Station, a project that has prompted questions from one senator.

Among the payloads on a Northrop Grumman Cygnus cargo spacecraft launching to the ISS Sept. 29 are 10 bottles of a face cream by Estée Lauder. The bottles will be photographed in the cupola of the station, with the Earth as a backdrop, and the company will use the images in social media campaigns.

“You may be asking why a beauty company is interesting in sending our product to the International Space Station,” said Stéphane de la Faverie, group president of The Estée Lauder Companies and global brand president of Estée Lauder, during a Sept. 24 NASA media briefing about various payloads on the Cygnus mission.

“We are always looking for the next frontier or breakthrough,” he explained. “We are really incredibly inspired by the work NASA is doing to push the boundaries of space exploration, and we saw a lot of synergy between both our brands’ commitment to science and innovation.”

De la Faverie said that the images will be used as part of “an exciting story that we are building to share with followers as we take them on a journey into space.” He didn’t elaborate on the nature of the story. The bottles will be returned to Earth next spring, and the company may auction one of them for charity.

NASA astronauts will photograph the cosmetics in the cupola, said Phil McAlister, director of commercial spaceflight development at NASA, but not appear in the images. The astronauts also won’t receive any additional compensation for that work. Estée Lauder will pay NASA approximately $128,000 for transporting the bottles to and from the station and conducting the photography.

The Estée Lauder payload is part of a broader effort by NASA to support commercialization of LEO as it seeks to eventually transition from the ISS to commercial space stations. Part of that initiative, announced in June 2019, reserves 5% of NASA ISS resources for use on commercial projects, like this one.

“In order for those destinations to be sustainable,” he said of commercial space stations, “they’re going to need customers other than NASA to support their operation. This Estée Lauder payload is one part of NASA’s overall strategy to help making that transition and to help commercial LEO development.”

But sending bottles of face cream to the ISS has led to some wrinkled brows on Capitol Hill. Sen. Jeanne Shaheen (D-N.H.), ranking member of the commerce, justice and science subcommittee of the Senate Appropriations Committee, raised questions about the project during a Sept. 23 hearing on NASA’s fiscal year 2021 budget proposal.

“I’m a fan of Estée Lauder’s Advanced Night Repair, like anybody else who might want to benefit from its antigravity properties,” she said of the face cream. “I guess I’m having trouble understanding how Estée Lauder’s effort is going to support the commercialization efforts of NASA.”

She argued that the $128,000 the company will pay NASA will be just a fraction of the overall cost of the project. “Can you talk about how shooting a cosmetics commercial advances NASA’s mission?” she asked NASA Administrator Jim Bridenstine.

Bridenstine said he wasn’t familiar with the project. “I don’t think that shooting a cosmetics commercial is the intent of that particular mission,” he said. However, neither McAlister nor de la Faverie discussed any additional aspects of the project beyond the photo shoot in the cupola that will be used for marketing by the company.

McAlister said that the proposal from Estée Lauder was reviewed by NASA officials to determine if it met the criteria for being flown on the ISS as part of the LEO commercialization initiative. He said the proposal met the requirement that it “support the development of a sustainable LEO economy” and thus deemed eligible to fly.

The fact that Estée Lauder is a nontraditional user of the station is a benefit in NASA’s view. “We need many businesses thinking of unique and innovative ways to expand economic activity in space,” he said. “We also think there’s value from a large, well-known company, such as Estée Lauder, being among the first companies taking advantage of our commercial use policy.”

McAlister said several other proposals for commercial use of the ISS are being evaluated, including an agreement NASA signed recently that he said the agency would discuss in the near future. “This is a pathfinder, but I think this has definitely raised awareness, and we’re going to see more interest, we hope, in the future.”

“We don’t know how exactly this is going to play out,” he said. “We need lots of people thinking of different things to do in space, and the fact that this was a surprise to so many people, I think, speaks directly to that point.”

A dead end on the way to the sky
Tesla recalls nearly 50,000 Model S and X cars in China over faulty suspension
NASA just successfully touched down on an asteroid
Daily briefing: How the uncrushable beetle got so strong
When And Where To See A Big Blue ‘Afternoon Moon’ In The Daytime Sky This Week (And Why It Happens)