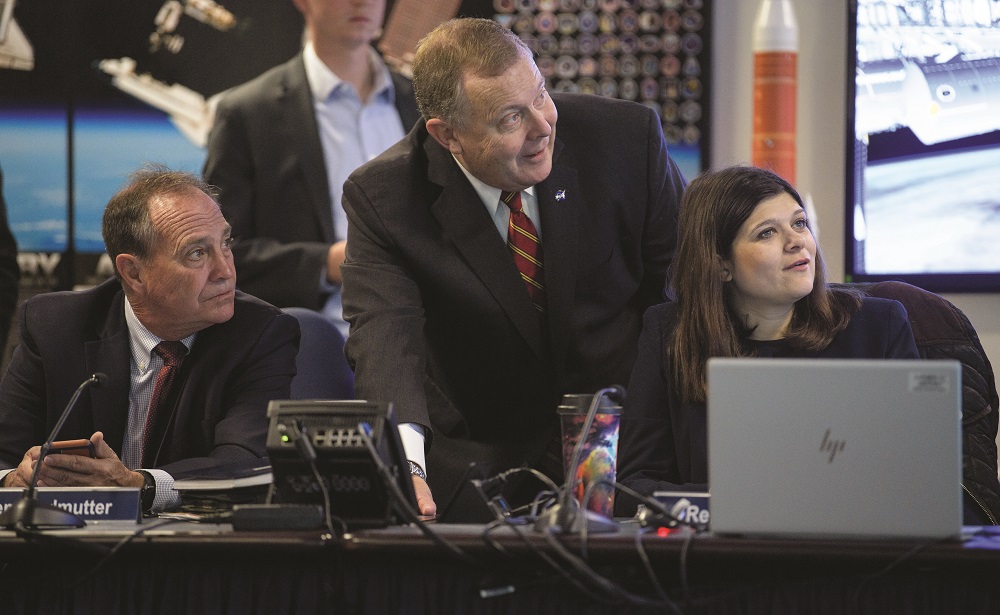 This article originally appeared in the Dec. 11, 2019 issue of SpaceNews magazine.

Jim Morhard may be a newcomer to space, but not to astronauts. The NASA deputy administrator often tells the story of how, as a six-year-old in Arlington, Virginia, he and his older brother knocked on the door of a famous neighbor. “He let us pet his cat, gave us a drink of water, and my brother got his autograph,” he recalled in a recent speech. “That was the first time that I met John Glenn.”

It’s been a little more than a year since Morhard, a longtime Senate appropriations staffer, was sworn in as the agency’s 14th deputy administrator. In recent months, he’s taken on a bigger public profile, with more speeches and presentations and even a Twitter account, highlighting NASA’s Artemis program to return humans to the moon as a precursor for even more ambitious exploration efforts.

“The primary goal of Artemis is a Mars concept of operations,” he said in a Dec. 3 speech at the U.S. Chamber of Commerce’s “Launch: The Space Economy” conference in Washington, tying the agency’s push to return to the moon with long-term ambitions for human missions to Mars. “We need to safely land humans on the moon, land hardware there, establish a presence and then keep going. It could be the moon will be the jumping off point for much more than Mars.”

Immediately after that speech, Morhard sat down with SpaceNews Senior Staff Writer Jeff Foust to talk about exploration, NASA’s prospects for getting funding to enable those exploration plans, and his first year on the job at NASA.

One thing that was clear from your speech is tying in the moon as a step toward Mars. How has your thinking evolved on this, since earlier this year the emphasis was much more on the moon alone?

What we’re doing is really a great preparation to go to Mars and beyond. The moon is critical for anywhere we go beyond. I was on the defense appropriations committee years ago, right after the first Iraq War. Norman Schwarzkopf came to us and he said, “You know, I wasn’t worried about the warfighter. I was worried about the logistics tail. Could I get power, electricity, food, trucks, everything I needed to the warfighter?” It’s this logistics tail that’s going to be the great challenge, and we’re going to have to focus on that as much as the technology.

How does that fit into the sprint to the moon by 2024 that the White House has directed?

That’s part of the logistics tail to do that. We’ve got, using CLPS [Commercial Lunar Payload Services], the hope of having unmanned missions that provide that logistics tail up to the moon. So we should have everything in place to get there by 2024.

We’re excited about Doug Loverro coming on board yesterday. Doug comes in wearing a pin, and it’s got how many days are left before Dec. 31, 2024. It’s to remind people we are focused on 2024 along with safety, cost and schedule.

How do you balance that urgency, that countdown that Loverro is literally wearing on his lapel, with safety concerns about going too fast?

Safety is paramount. I think it helps when you’ve got as administrator a fighter pilot that did hundreds of carrier landings and you’ve got a deputy who was in a plane crash. I think that gives a different view of how important safety is. We both have our own experiences with it. We had a meeting a few weeks ago down at Kennedy, and I said, “Look guys, if any of you have any issues on safety, come to me.”

Another factor in all this, leveraging your experience in appropriations, is getting sufficient funding this year and beyond. What’s your take as we approach the end of the current continuing resolution Dec. 20 and the prospects for getting a final appropriations bill?

Anybody who says they know how it’s going to end doesn’t. I remember going into leadership meetings with Sen. Ted Stevens, when Bill Frist was the majority leader, and each week he’d say, “We’ve got a plan.” Well, it was a different plan from the week before. I’m not saying that’s happening today, only that it can be so fluid.

Do you get any sense of the momentum, one way or another, regarding how the $1.6 billion in additional funding for Artemis is faring in Congress?

There’s no way they’re going to show us anything right now, because that leads to further lobbying. I can’t read the tea leaves, but I’m confident they’ll make the right decisions. We’ve got to make sure that we continue to fund the science programs in a way that is satisfactory to the constituencies that are out there, as well as our charge for human exploration. And we’re going to keep doing that.

You’ve been on the job at NASA for a little more than a year now. It’s a big change from the world of appropriations. How has the experience been like?

It was a big change. I really tried to keep my mouth shut for the first four to six months. There’s an organizational structure and then there’s an unwritten organizational structure and I needed to learn both. This is about relationships, and I’ve done everything I can to try to forge those relationships. They are, as you know, just great people at NASA. So, it’s been enjoyable, and it’s just gets better and better each day.

Yes, we are always going to have challenges. But working together with people that really are at a level that they are is my honor.