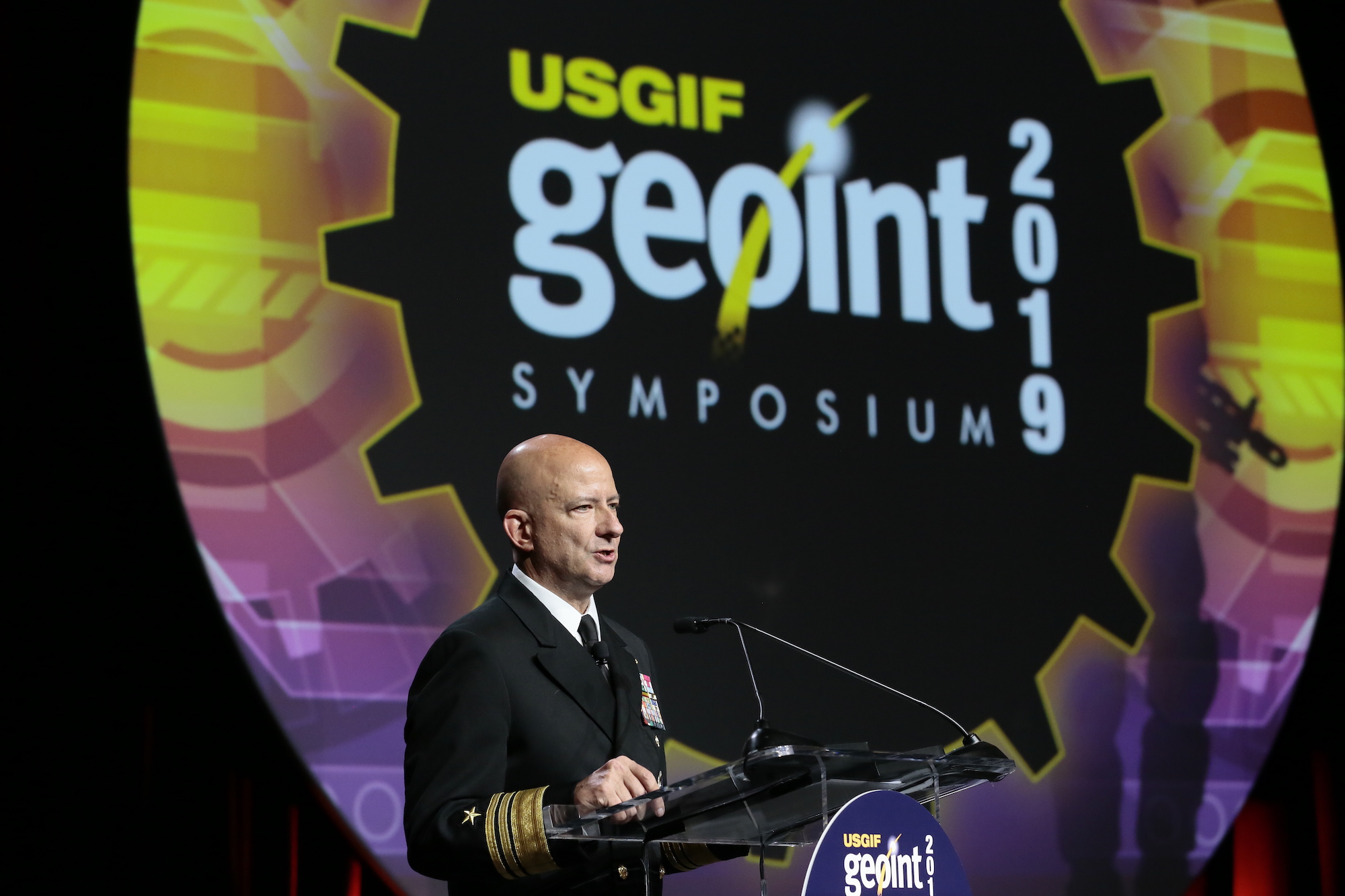 SAN ANTONIO, Texas — In the data arms race, it’s not about how much data you have but what you do with it.

That about sums up the challenge facing the National Geospatial Intelligence Agency (NGA), a giant organization of 14,500 employees responsible for acquiring and analyzing satellite imagery, and providing mapping services to the U.S. military and intelligence community.

“We’re currently faced with a security environment that is more complex, inter­connected and volatile than we’ve experienced in recent memory — one which will require us to do things differently if we’re to navigate ourselves through it successfully,” NGA Director Vice Adm. Robert Sharp said on Monday in a keynote speech at GEOINT 2019, the nation’s largest gathering of geospatial intelligence professionals hosted by the United States Geospatial Intelligence Foundation.

This was Sharp’s first major address since being sworn in last February as NGA director. He was previously commander of the Office of Naval Intelligence and director of the National Maritime Intelligence Integration Office.

NGA’s former director Robert Cardillo was a civilian. The office of the director of national intelligence decided to pick a military officer to succeed him. Sharp said having a uniformed leader in charge is a “visible affirmation that NGA is a combat support agency.”

Like Cardillo, Sharp believes NGA needs to change its business practices as more private sector companies and foreign governments figure out new ways to collect imagery, analyze it and derive insights from it.

“NGA needs to mitigate the element of surprise by improving its ability to understand the world and anticipate future events,” he said. “We’re committed to modernizing our IT infrastructure, collection services, networks, training and business practices. We’ve got to keep up with the deluge of data.”

In addition to satellite imagery, NGA is collecting intelligence from airborne sensors and other sources, as well as from international partners, Sharp said. “To evolve, we need to think about the full spectrum of how we’re collecting.”

Sharp highlighted a new effort to improve the speed and quality of maritime intelligence. NGA is automating a 150-­year old process to ingest source data in 14 languages from 75 countries, he said. It now uses translation algorithms and optical character recognition to read documents in different formats, and it puts maritime symbols, numbers, and words into a geospatial intelligence environment. “That means analysts don’t need to scrutinize pages of source data and charts by hand anymore,” said Sharpe.

NGA is using more unclassified imagery, for example, to monitor China’s activities in the South China Sea, and their maritime and territorial disputes with the Philippines, Malaysia, Vietnam, Taiwan and Brunei. China has built outposts on two archipelagos there – the Paracel Islands and the Spratlys. NGA last year noticed the deployment of Chinese military equipment to their Spratly outposts, Sharp said.

Most of the innovation now happening in geospatial intelligence centers around automation — using artificial intelligence algorithms to analyze imagery and combine that data with other sources of intelligence. NGA is looking to forge closer ties with the tech industry and universities that are advancing AI technology must faster than the government.

That is one of the goals of NGA’s new campus in St. Louis, Missouri. NGA is headquartered in Springfield, Virginia, where half its workforce resides. About 25 percent of NGA’s employees are based in St. Louis and the other 25 percent are deployed around the world. The agency is making a huge investment in the new facility in St. Louis, where 20 percent of the space will be for unclassified work in order to attract private sector and academic partners, Sharp said.

The city’s mayor Lyda Krewson said NGA’s expansion there will turn St. Louis into the Silicon Valley for the geospatial-intelligence sector.

Apple releases iOS and iPadOS 13.4 with trackpad support
NASA Explorers: Cryosphere – The Big Thaw
Apollo 11: Landing on the Moon
Paul Polman: How responsible businesses can step forward to fight coronavirus
Stripe leads $20M Series A into Fast, which is building a universal checkout service for e-commerce