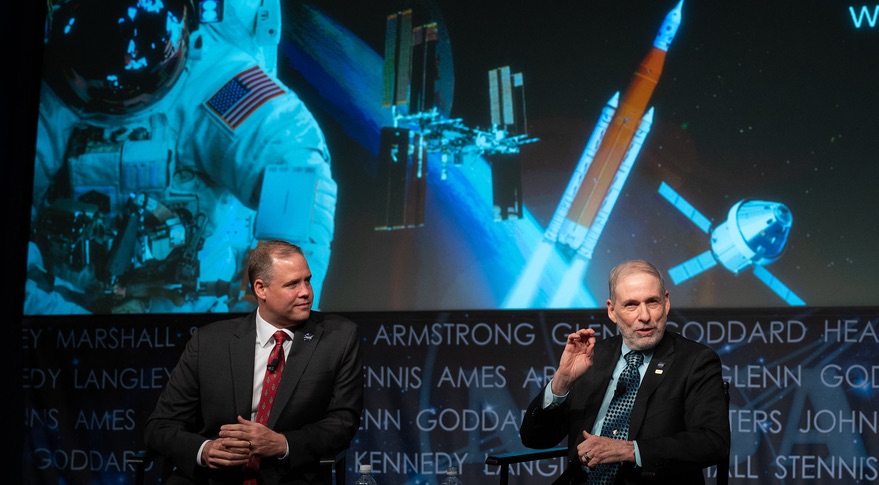 WASHINGTON — The new head of NASA’s human spaceflight programs affirmed his support for the Space Launch System Dec. 3, saying the long-delayed heavy-lift rocket is “absolutely mandatory” for returning humans to the moon.

Speaking at a town hall meeting with agency employees at NASA Headquarters, Doug Loverro, who started work Dec. 2 as the new associate administrator for human exploration and operations, and NASA Administrator Jim Bridenstine pushed back against criticism that the SLS is too expensive to be sustainable for NASA compared to commercial vehicles that promise to cost far less.

That lingering criticism of the SLS was renewed after an October letter by Russell Vought, acting director of the Office of Management and Budget (OMB), to Sen. Richard Shelby (R-Ala.), chairman of the Senate Appropriations Committee. Vought, in that letter, sought relief from a provision in a Senate appropriations bill that directed NASA to launch Europa Clipper, a mission to study Jupiter’s large icy moon Europa, on an SLS.

“At an estimated cost of over $2 billion per launch for the SLS once development is complete, the use of a commercial launch vehicle would provide over $1.5 billion in cost savings,” Vought wrote.

Bridenstine, though, claimed that cost estimate was too high. “I do not agree with the $2 billion number. It is far less than that,” he said at the town hall meeting. “I would also say the number comes way down when you buy more than one or two.”

“I think at the end, we’re going to be at the $800 million to $900 million range. I don’t know, honestly,” he said, because NASA had just started negotiations with prime contractor Boeing on a long-term production contract for the SLS.

Loverro said he disagreed with the belief that SLS was competing with commercial vehicles under development, such as Blue Origin’s New Glenn and SpaceX’s Starship/Super Heavy. “I think there is a large ecosystem of space capabilities, and we need every capability that the nation is going to provide, whether the nation provides it through government funding, as SLS is, or through entrepreneurial and commercial funding.”

The SLS, he added, was essential to the goal of returning humans to the surface of the moon by 2024, the goal established by the Trump administration eight months ago. “The fact of the matter is, the only system we have today that is designed, purpose-built, to go ahead and get men to the moon and women to the moon is the SLS,” he said. “That program is absolutely mandatory, in my view right now, to go ahead and get there.”

SLS will be one of Loverro’s top priorities as the new head of NASA’s Human Exploration and Operations Mission Directorate. The vehicle’s first launch, originally scheduled for the end of 2017, is now planned for no earlier than late 2020, and widely expected to slip into 2021. The vehicle’s core stage is nearing completion at the Michoud Assembly Facility in New Orleans and will be shipped around the end of December to the Stennis Space Center in Mississippi for testing, including a full-duration static-fire test.

Loverro said at the town hall meeting he will spend the next few months reviewing the status of that program and others in his portfolio, such as the Orion crew vehicle. “I think we’ve got a good plan. I think we will find elements of the plan that have to be changed,” he said. “My job over the next three months is to examine all of those things, figure out where we are in the baseline of the program, what do we need to go ahead and modify, what do we need to change, in order to raise even more our chances of success.”

He rejected the notion a pin like that or other efforts would create undue schedule pressure. “Some people have commented to me that this could create launch fever,” he said. “Well, if this is launch fever, I’m feeling pretty healthy right now.” The intent of the pin, he said, “is to make every day count.”

Loverro, who comes to NASA after a long career in the national security space field, succeeds Bill Gerstenmaier, who was reassigned to a special advisor position in July after more than a decade in associate administrator roles involving human spaceflight. Bridenstine praised Gerstenmaier while saying Loverro brought in key skills needed for this stage of NASA’s exploration efforts.

“It was time, in my view, to find a leader that had a long history of making program run on schedule and on budget, and I think Doug is that kind of leader,” Bridenstine said.

“We are poised where we are today to succeed in what the president and the nation has asked us to do because of the work Bill did,” Loverro said, asking the town hall audience to give him a round of applause.